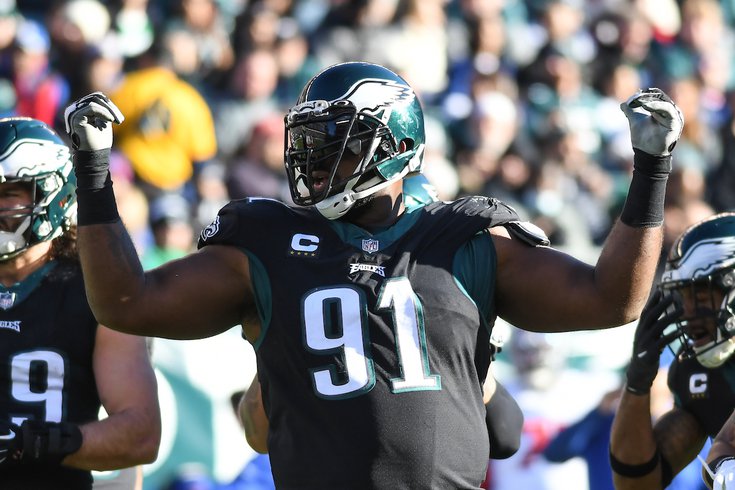 NFL free agency will essentially begin on Monday, March 14, when the NFL will open a two-day window during which teams are permitted to contact and negotiate with free agents. The first day of the new league year, which is the "official" start of free agency, is March 16.

Since we're right around the corner from free agency, let's start tracking reports and rumors that are pertinent to the Philadelphia Eagles. Most recent entries at the top:

According to Jordan Schultz, the Eagles and Jags are interested.

Jacksonville will pursue the 25-year-old as a potential No. 1 option for Trevor Lawrence to build with, while Philly believes he can be an ideal long-term complement to DeVonta Smith.

I'm not sure I'd call the Eagles "dark horse" candidates, as they were reported to have interest in JuJu last offseason, and have been commonly linked to him this offseason as well. But, this rumor makes sense.

Deshaun Watson will visit with the Panthers and Saints

According to Ian Rapoport, Watson will visit with the Saints and Panthers to determine if he'll waive his no-trade clause or not for those teams.

The #Saints and #Panthers have made offers for #Texans QB Deshaun Watson and are likely to meet with him soon, sources tell me and @TomPelissero. Other teams also are involved. Watson has a no-trade clause and wants to meet with teams before formally waiving it anywhere.

I'm not going to put out any sort of official report that the Eagles aren't going to trade for Watson, but I will say that if you're an Eagles fan and you don't want him to play here, I wouldn't worry too much about it.

According to Jordan Schultz, a trio of AFC teams are in the mix.

Trading Cox would mean a $40M dead cap charge for Philly, so the return would have to be substantial.

Cox's dead money hit would be closer to $25 million, not $40 million as the above tweet states, but those three teams all make sense.

According to Jordan Schultz, they are.

I’m told the #Bills and #Eagles are also interested in Chandler Jones, who continues to be one of the premier pass rushers in the league.

Even at the age of 32, Jones still seems to have plenty left in the tank and will very likely continue to be a disruptive defensive playmaker. The Eagles have limited cap space with which to operate, but if there's a position in which I believe it's possible the Eagles would make a splash free agency signing, it would be at edge rusher.

Deshaun Watson to the Seahawks?

This is probably noteworthy.

.@MoveTheSticks on his most recent pod: “in talking to friends around the league the expectation from every single one of them is that when it’s all said & done Deshaun Watson’s gonna be the quarterback (for the Seattle Seahawks)”https://t.co/XMCc8ZSSUO

The Seahawks are obviously a QB-needy team after trading Russell Wilson.

Fletcher Cox on the move?

According to Ian Rapoport, teams around the league remain interested in trading for him.

With all these big names being dealt, who could be the next? Last year, #Eagles Pro Bowl DT Fletcher Cox was nearly dealt at the trade deadline, and teams around the league have continued to call on him. Considering the D-line movement around the league, it’s something to watch.

We have much more on that here.

According to Jay Glazer of Fox Sports, the Eagles and Falcons almost had a deal done, but the Falcons had to back away from it when they knew that punishment was coming for Ridley.

Yup, Eagles almost had deal done for Calvin Ridley last month… Falcons backed out but weren’t able to tell Eagles why. They actually handled it great and after a lot of confusion Philly respected them for how they handled a very different situation. Eagles swung away @NFLonFOX

As noted below, I did not think the Eagles should have given up a high pick to acquire Ridley. It would be interesting to learn what that trade compensation would have been if the deal hadn't fallen through.

This does show, however, what we already presume, which is that the Eagles are in the market for a veteran wide receiver.

We covered this one in its own article here.

Chris Godwin reportedly to be franchised tagged by the Buccaneers

Godwin will remain with the Buccaneers in 2022.

Godwin is a receiver that many Eagles fans coveted in free agency. We previously covered his likelihood (or lack thereof) of becoming an Eagle.

It'll be interesting to see how Godwin's market develops with him rehabbing an ACL tear that occurred in mid-December. My guess is that he's likely to sign a one-year "prove it" deal, and try to break the bank in 2023 when the salary cap is expected to rise substantially.

But he'll still be quite expensive in 2022, and if you're only potentially going to have him for one year during which he may not even be 100 percent (at least early on during the 2022 season), he's going to take up a big chunk of the team's already very limited cap space. I do like the fit with him, DeVonta Smith, and Quez Watkins in the Eagles' offense, but my guess is that he signs with a team flush with cap space.

The Bucs tagged Godwin last year, and he cost $15,983,000 on their salary cap. By tagging him a second straight year, he will cost 120 percent of his previous year's salary, or $19,179,600. That's a hefty price tag, and it's somewhat surprising that the Bucs are willing to pay that much to retain him. But assuming that report is accurate, Godwin won't be an Eagle.

Aaron Rodgers to sign new contract with the Packers

Rodgers is now the highest paid player in NFL history.

The #Packers and MVP QB Aaron Rodgers have agreed to terms on a 4-year, $200M deal that makes him the highest paid player in NFL history, sources say. He gets a whopping $153M guaranteed and his cap number goes down. A monstrous commitment by GB for years to come. 💰 💰 💰

That's a lot of horse paste.

Rodgers was never a realistic target for the Eagles, but his signing represents the first in the line of dominoes that could fall at the quarterback position around the league.

The Eagles won't be trading for Calvin Ridley (presumably)

The NFL announced on Monday that Calvin Ridley was suspended for one year for placing some parlay bets while he was on the non-football injury list during the 2021 season.

Earlier this offseason, Ridley was the subject of trade rumors. The Eagles were never reliably connected to Ridley at any point to my knowledge, but as is tradition in Philadelphia, every noteworthy receiver on the trade block in the history of the NFL is going to be coveted by some percentage of Eagles fans.

Ridley never really made much sense as a trade target, in my opinion, for the following three reasons:

It always made more sense for the Eagles to (a) sign a receiver in free agency and not have to give up a pick, or (b) draft one with a high pick and not have to pay him much for four years. Had they traded for Ridley, they'd be acquiring a risky player who cost a lot both in terms of draft and financial capital.

If trading for Ridley was ever on the table, it isn't anymore, presumably.

According to Albert Breer of Sports Illustrated:

Those in the league continue to connect Watson to the Eagles and Broncos. Obviously, clarity with Watson’s legal situation would help (and further bolster the market for him), but the football people in those two places are positioned to strike if the right deal is there. Philly owner Jeffrey Lurie has consistently been willing to take players with baggage, and Denver doesn’t have an owner right now.

The Eagles were clearly interested in Watson during the 2021 offseason, and they will continue to be connected to him until (a) Watson is traded somewhere else, (b) he definitively says he won't play for the Eagles, (c) the Eagles definitively say that they have no interest in Watson, or (d) the Eagles make a different splash move for a quarterback.

Howie Roseman was given the opportunity to pour some cold water on Watson rumors at the Combine, and he punted.

"In terms of players on different teams, no matter what position, don't feel comfortable, can't talk about players on other teams.

By contrast, Dolphins GM Chris Greer emphatically stated that Miami is out on Watson, when they also clearly had strong interest in him a year ago:

Dolphins GM Chris Grier says “the door is shut on Deshaun Watson.” He says that is definitive and they believe in Tua Tagovailoa’s development going into Year 3.

It could be another long offseason of Watson talk.

This report comes via Evan Massey (not to be confused with PhillyVoice's Evan Macy) of NFL Analysis Network.

Per source, the #Eagles are expected to show interest in signing #Packers free agent linebacker De’Vondre Campbell. Green Bay would still like to retain him too.

Campbell had a career year for the Packers in 2021, racking up 146 tackles, 2 sacks, 2 INTs, 2 forced fumbles, and 5 pass breakups on his way to first-team All-Pro honors. He had 53 more tackles than the next closest player on the Packers' defense.

The Eagles have traditionally been active each year in the linebacker market in free agency, but they have targeted low-cost players. For example:

Going cheap at linebacker hasn't exactly worked for the Eagles, as evidenced by the list of names above, so there's perhaps some logic that they will finally pony up a little more money to help fix the position. However, it's very unlikely that they'll go from one extreme to the other and shell out major money for an All-Pro player, especially when they don't have much in the way on financial resources at their disposal.