Mailbag: What potential sliders in the 2022 NFL Draft should the Eagles consider trading up for? 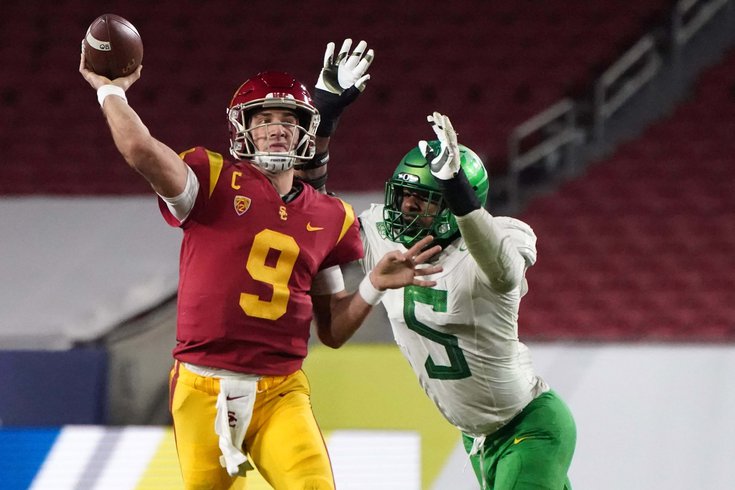 Question from Owen: Is there any non-quarterback prospect that if they fell out of the top ten like Laremy Tunsil or CeeDee Lamb did in earlier drafts that you would consider trading up for?

A version of this question came up among some friends of mine recently, and someone suggested LSU CB Derek Stingley, whose stock seems to be fading a bit.

Stingley was a freshman during LSU's dominant national title march in 2019. He racked up 6 INTs and 15 pass breakups that season, both of which led the SEC. In 2020, he didn't get as many hands on passes, because he battled some injuries, and opposing offenses stopped throwing his way. In 2021, Stingley only played in three games, and his season ended in early October when he had a medical procedure on his foot. He won't participate at the Combine.

As a prospect, Stingley has everything you want in a CB1 — size, speed, ball skills, technique, and confidence. His freshman season was so impressive that it has kept his draft stock high despite being out of the spotlight for a couple of years, but it'll be interesting to see if teams begin to view him as too big a risk in the top 10.

And then I think you also have to consider pass rushers for this question as well. I don't anticipate Oregon's Kayvon Thibodeaux falling out of the top 10, but if a couple of edge rushers got picked before him and he somehow slid, the Eagles would at least have to see what the price would be to move up.

Question from Wave: What is the one position, if any, that you can foresee the Eagles double-dipping on with their three first-round draft picks?

Edge rusher. As Daniel Jeremiah pointed out, a lot of them are going to get drafted in the first round:

The quarterback conversation aside, edge rusher is clearly the Eagles' biggest positional need, which marries up nicely with the strength of this draft.

Question from Nick: I get that lately high-priced receivers have kind of fallen off a cliff, but I feel like Chris Godwin could be an exception? Multiple 1,000 yard seasons with different QBs, and he's only 26. Is there a better argument against Godwin than “other guys have gotten paid and failed?"

It'll be interesting to see how Godwin's market develops with him rehabbing an ACL tear that occurred in mid-December. My guess is that he's likely to sign a one-year "prove it" deal, and try to break the bank in 2023 when the salary cap is expected to rise substantially.

But he'll still be quite expensive in 2022, and if you're only potentially going to have him for one year during which he may not even be 100 percent (at least early on during the 2022 season), he's going to take up a big chunk of the team's already very limited cap space. I do like the fit with him, DeVonta Smith, and Quez Watkins in the Eagles' offense, but my guess is that he signs with a team flush with cap space.

Question from Brian: Please tell me the Eagles will adjust their defensive scheme for next year. This whole give up 7-8 passing yards on a given play is a “win” is totally ridiculous.

So that'll be a big question heading into 2022. Gannon will have a lot of players in their second year in the scheme, and I'm sure we'll hear more about how there's less thinking and more reacting, blah blah blah. It'll also be interesting to see how Howie Roseman and the gang can improve the roster defensively.

But if the defense looks anything like it did in 2021 against good quarterbacks, the Eagles will need to make changes.

Question from Zach: Why is Nick Sirianni looked upon so favorably for the team's success last year? It was clear to many Eagles fans that this team had an advantage as a running team very early in the season. Sirianni didn't recognize it until much later. How does one ignore the first half of the year, where he had games with 3 rushing attempts, 10 rushing attempts, etc.?

I don't think anyone ignored that at all. He got crushed early in the season for not playing to the team's strengths, and I can't speak for others who cover the team, but when we reviewed Sirianni's full season here, his early-season struggles in that area (and others) were well documented.

There's also the question as to how much influence the Eagles' brass may have had on the way the Eagles' offense operated offensively early in the season. There's a theory that they wanted to see how Jalen Hurts could handle "the type of offense the Eagles ultimately want to run," and when he proved he couldn't they bailed on that and played toward his strengths. Again, that's just a theory, but one that makes some sense.

Question from DB: With so much TV money available, do you think more coaches and aging vets make the jump early?

Yeah, we've already seen it. Jason Witten quit football for the booth, and when he was awful as an announcer, he went back to playing. Tony Romo probably could have kept playing, but getting paid tens of millions of dollars to talk about football is probably better than having your spine mangled.

And then this offseason, it looked like Sean McVay was considering a switch, but he ultimately went back to the Rams.

As long as TV networks are willing to shell out obscene dollars to attract players and coaches, that could become more common. And that's fine by me. I'd much rather see who the networks can attract from the current pool of players and coaches than listen to a game called by Mark Schlereth.

Question from jy: Re: Stay or go polls, I voted “stay” for a lot of guys who I think merit bringing back to camp but I really hope the team can upgrade on (like all the linebackers). “Go” was reserved for players who actively stink or the rare few like Cox that we might get something in trade for. Anyway, to make it a question, why don’t we get the “back in camp” option? ;)

Ah, yes, this seems to be a point of contention in the comment section. For the purpose of fan/reader voting, I like those results to be clean for the final post of the series where we show the final poll results, as more of a fan approval rating. I handle the boring "what the team will probably do" part, but from a voting perspective, it's more interesting to me what you all want the team to do with the players, in my opinion, as opposed to what you think will happen.