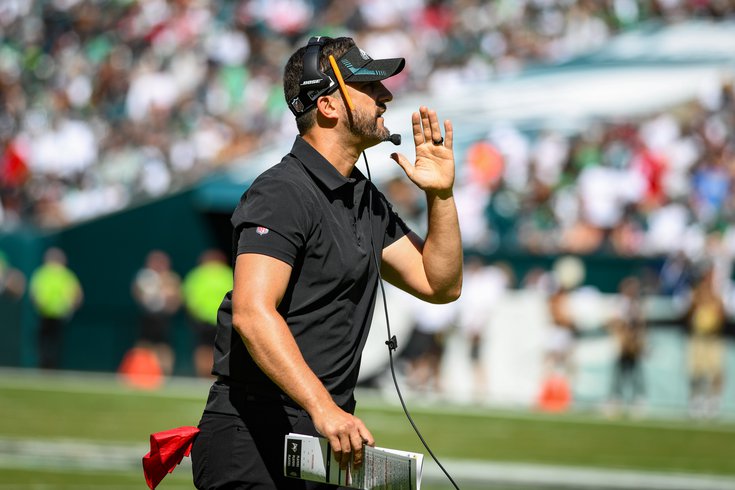 To begin, let's first be clear that Nick Sirianni isn't going anywhere. Think of this more as of a review / approval poll of his season than an actual debate over whether or not he will keep his job.

Sirianni took over a 4-11-1 team and helped guide it to a five-win improvement. Of the seven head coaches hired during the 2021 offseason, Sirianni was the only one who made the playoffs in his rookie season as a head coach.

There were bumps along the way, and they began during Sirianni's initial press conference. He was obviously nervous, he stumbled over some words, and he was put into a situation in which there were no good answers to some obvious questions that had to be asked, namely whether Carson Wentz would be back with the team in 2021.

If you could get past the delivery of the messages, the things Sirianni said were (mostly) fine. During a long opening statement, Sirianni outlined his five core values:

In my opinion, he achieved values 1, 2, 3, and after some early-season issues with penalties subsided, 4. It's tough to say how much the team's fundamentals grew throughout the season, but there was a clear emphasis on technique and fundamentals throughout training camp practices.

Despite the encouraging end results, there were times during 2021 season that it appeared Sirianni could be one and done. I believe he faltered early on in the season in three ways, but corrected all three issues as the season progressed:

1) He (initially) did not accentuate the strengths of the personnel on the team.

It was pretty clear before the 2021 season even began that if the Eagles were trying to maximize their short-term success, they should employ a run-heavy offense. Maybe the Eagles saw that as well, but wanted to see if Jalen Hurts could run an offense that they ultimately wanted to run, but when it became clear he could not, they changed course? And maybe there was some influence on the type of offense the Eagles ran from higher up? That's all certainly possible, but it took a month and half for the Eagles to commit to what they did best, which was run the football.

Sirianni has been credited for accentuating the strengths of his players, but it did take a while for him to get there with this group.

2) His play calling was sometimes a little too cute.

In the middle of the second quarter Week 2 against the 49ers, the Eagles got a huge play when Jalen Hurts found Quez Watkins deep down the sideline for a 91-yard strike. Watkins was tackled at the 3, but the Eagles would eventually get a 1st and Goal from the 1 after a pass interference penalty on Josh Norman in the end zone.

You know what works in those situations? QB sneaks! Even if you get stopped, sneaks almost never result in a loss of yardage, so the downside is extremely minimal. Oh, and hey, your quarterback can squat over 600 pounds.

Instead, Sirianni called four plays that failed to get the Eagles into the end zone, a sequence that may have very well cost them the game. While Sirianni took accountability for not calling good plays during that sequence, he explained that he did not want to sneak from a full yard away, as opposed to a situation later in the game when they only had inches to go.

Of course, the most noteworthy play from the devastating four-down series above was the failed 4th and Goal "Philly Special" call that the Niners easily sniffed out.

3) His gameplans early on were odd.

After a blowout loss in Dallas Week 3, Sirianni revealed during his postgame press conference that his game plan was to essentially win a shootout against a team that they thought was going to score a bunch of points. Lol what? 🤯

Typically, when you're facing a team that you think has great offensive firepower, you try to negate that edge by controlling the football, which the Eagles were poised to do against defense missing a boatload of defensive linemen. Eagles running backs carried the ball a grand total of three times in that game.

Similarly, against the Buccaneers Week 6, running backs carried the ball one time in the first half. The Eagles never had a chance in either of those games with those game plans.

MORE: Eagles mailbag: What kind of production might DeVonta Smith have had in a better passing offense?

The low point of the Eagles' season was their blowout loss to the Raiders in Las Vegas, after which Sirianni unleashed his fertilizer metaphor. The direct quote:

"So that was my message today because we are going through tough times, and everybody wants to see results. But just keep doing what we're doing, keep watering, and look at yourself first and know are you watering and are you fertilizing every day? So, when it's time to pop, it will pop."

When you're winning, messages like that will be received favorably. When you're losing, not so much, and Sirianni was mocked widely, perhaps unfairly, for that message.

Ultimately, the offense did "pop," but it was because Sirianni began to commit to a run-heavy approach. The Eagles quickly changed course from a finesse offense to one with a mean, nasty identity led by a star-studded offensive line.

From Week 8 on, the Eagles racked up huge numbers on the ground:

During the stretch from Week 8 to Week 15, the Eagles became the first team since the 1985 Bears to run for at least 175 yards in seven straight games.

The advanced stats on the season were excellent, given some obvious roster holes on the Eagles' offense. Via Deniz Selman:

In case you can't read that:

As you can see, there are a lot of top 10 finishes in there.

#JimmyVerdict: When Jeffrey Lurie introduced Sirianni as the team's new head coach during the aforementioned initial press conference, he cited "what coach he can become and what organization we can become with his leadership."

Lurie seemed well aware that there would be bumps in the road initially, which proved to be prophetic. Credit Sirianni for weathering those early bumps in a hardcore football city and improving as a head coach as the season progressed. It will be interesting to see how he evolves from Year 1 to Year 2. Stay.

As in, it's your decision, not what you think the team will do.