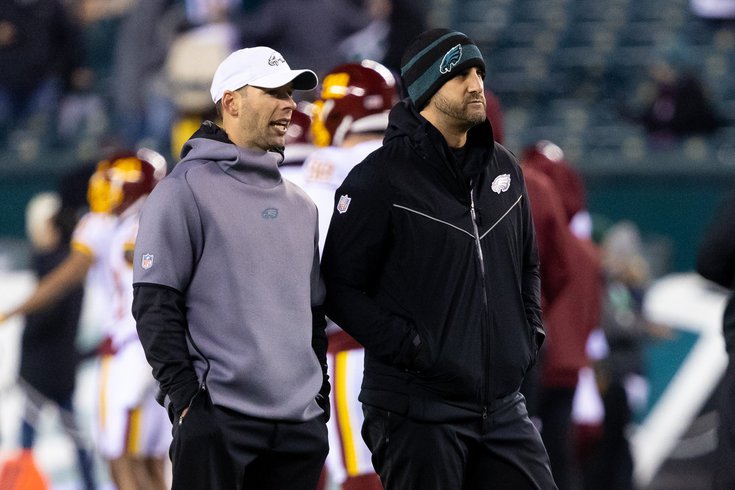 Now that the Philadelphia Eagles' 2021 season is over, we'll be taking a position-by-position look at which players will likely be back with the team in 2022, and which ones won't. But first, let's start with a few key coaching and front office positions, beginning with defensive coordinator Jonathan Gannon, since he has been interviewing for head coaching jobs with other teams around the league.

The Eagles' defense in 2021 was fine against bad quarterbacks, but they barely made the good ones break a sweat. A visual:

The good/great quarterbacks performed better against the Eagles than the bad ones, which obviously isn't surprising. However, the Eagles made life far too easy on the good quarterbacks, who picked apart the Eagles' soft coverage defense with ease. The super basic way of putting it is that they took what Gannon's defense gave them until the ball was in the end zone. It often looked like this:

The following is a table put together by Deniz Selman, showing advanced defensive stats/rankings for every team in the NFL.

In case you can't read that, we'll separate the Eagles' rankings from the rest of the league:

Was it the players or the scheme? Certainly, the Eagles' defensive personnel isn't great. But it's also not bad.

They had a Pro Bowl cornerback in Darius Slay, and a Pro Bowl snub in Javon Hargrave. Surrounding Slay in the secondary were a trio of solid veteran players in Steven Nelson, Rodney McLeod, and Anthony Harris, plus Avonte Maddox, who had a bounce-back season playing in the slot where he belongs. The pass rush isn't what the Eagles want it to be, but they at least had legitimate pro players in Fletcher Cox, Josh Sweat, and Derek Barnett. Meanwhile, the linebackers weren't out there wrecking games like Nate Gerry a season ago.

They also had incredible injury luck. Brandon Graham was lost for the season early on, but that was about it in terms of players missing long stretches of time. Compare that to previous seasons, with Jim Schwartz playing guys like Josh Hawkins in the playoffs against Drew Brees, and Gannon barely had to do any scrambling at all, personnel-wise.

There's pretty good reason to conclude that the Eagles' defense underperformed in 2021. And yet, Gannon is somehow a hot name on the head coaching hiring circuit, having scored interview opportunities in Minnesota, Denver, and Houston.

The common talking points from national media types — and reporters in the cities that Gannon has interviewed in — is that Gannon is "smart" and "connects well with players." OK, that's nice. But don't the actual results kinda matter?

During Nick Sirianni's season-ending press conference, he was asked the following question:

"Will you retain Jonathan Gannon, assuming he isn't hired as a head coach, Shane Steichen and Michael Clay as your coordinators? And will the rest of the staff remain as is? And then, just to be clear, have you met with Jeffrey Lurie yet for the season-ending interview?"

"Yeah, look forward to all those meetings that we're having. I started some of our coaches meetings today, probably through about five of my end-of-year meetings with the coaches, with the guys upstairs, and look forward to talking to all of them here today and tomorrow."

So, for what it's worth, while Sirianni emphatically backed Jalen Hurts as his starting quarterback in 2022, he did not definitively say that Gannon, Steichen, and Clay would be back.

During the 2022 firing/hiring cycle, defensive-minded head coaches like Brian Flores (Dolphins), Mike Zimmer (Vikings), and Vic Fangio (Broncos) were fired, and are now looking for new jobs. I can't help but wonder if the Eagles wouldn't mind if Gannon landed a head coaching job elsewhere, so they could look to upgrade on him in earnest.

#JimmyVerdict: Gannon feels like a real threat to land a head coaching job. He is indeed smart, and I have no doubt that he'll interview well with interested suitors. We'll see. If not, I would highly doubt that the Eagles would fire him, but I also wouldn't completely rule it out. This is a bit of a toss-up, but we'll guess that Gannon does indeed get hired elsewhere, either as a head coach, or in a less likely scenario, mayyybe even if the Eagles allow him to make as a lateral move to a defensive coordinator job elsewhere. Go.