The biggest winners and losers from the 2021 Eagles season

Which players look better, and which look worse after 2021? 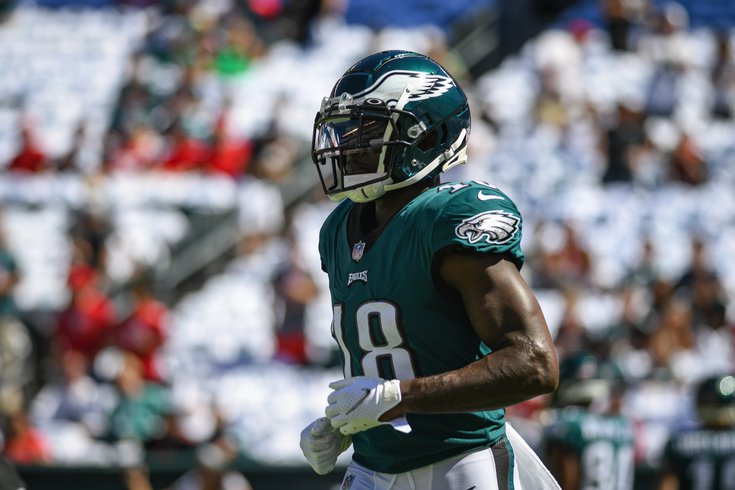 In football — just as in a Bruce Springsteen song — "it's just winners and losers and you don't want to get caught on the wrong side of that line..."

In addition to the Eagles overachieving as a team this season, playing their way to nine wins and a playoff berth as well, there were more than a few individuals on the team who definitely changed the conversation about themselves after the 2021 season.

Some figures, like Jalen Hurts for example, remain pretty close to that line between the winners and losers of the Eagles' season. Others, as we'll dive into in just a second, played firmly into one of those designations. We're going to highlight five of each and we'll throw in a few honorable mentions too. And as if you wouldn't otherwise, feel free to tell us you disagree below in the comments or on social media.

This was supposed to be a "retooling year." But, somehow, it turned into what could be the first of a slew of playoff appearances and competitive seasons to come. It would be hard not to credit the front office, led by Roseman, for the unexpected success the Eagles experienced in 2021.

Here's a brief list at all the things he did right in the last year:

The Eagles run game was the best in football this season. They had the most yards, the second most rushing attempts, the fourth best yards per carry and a team record and NFL leading 25 TDs. They did it without a 1,000-yard rusher. They also did a pretty good job protecting Jalen Hurts, who was sacked just 25 times. The line's 31 sacks allowed in total ties for the sixth fewest in the NFL. They also did it with 12 different linemen starting at least one game and 14 getting at least 10 snaps (which includes the practice squad game in Week 18).

Jason Kelce is once again an All-Pro, Lane Johnson is a Pro Bowler and Jordan Mailata looks like he has a future on both squads some day. The offensive line is this team's MVP.

It's one thing to get enormous votes of confidence from an NFL team, as Dallas Goedert did in 2021. It's another to make good on them and validate those decisions almost immediately. Not only did the Eagles extend the 27-year-old with a monster four-year, $57 million deal, they also traded away franchise legend Zach Ertz, opening up the top tight end spot for the South Dakota State product.

He responded, with a career high 78 targets and 830 yards this season. Both of those totals probably could have and should have been more had Hurts and the offense targeted him more. Only four tight ends had more yards this season, and none had more yards per target. All of this is even more impressive considering the Eagles threw fewer passes than any other team. He should be a top 5 tight end next season.

Since we're on the subject of awesome pass catchers who suffered from the Eagles' lack of passing (for better or for worse), rookie DeVonta Smith certainly fits the bill. The first-round pick set a team record in receiving yards this season despite being targeted only 104 times (37th in the NFL) and catching just 64 passes (45th most in the NFL). Smith showed incredible route running, speed and footwork this season and for whatever reason he was passed over often times in key spots.

The rest of the Eagles wide receiving corps combined for 135 targets and were absolutely awful, allowing defenses to single out Smith to try and shut him down. Once again, the Eagles made a big move to trade up for him and he validated that decision in one season.

As we mentioned in the Roseman section, the Birds made a move for Minshew back in the fall, sending the Jaguars a sixth-round pick. Cheap, under team control next year and one of the better backups in football, Minshew starred in the Eagles' win over the lowly Jets and has been getting buzz all over the rumor mill about being a potential starter elsewhere. It seems very possible that Philadelphia might be able to flip him for a pick much better than a 6, or even better, keep him as an underpaid insurance policy for Jalen Hurts.

• Kicker Jake Elliott, who made 30 of 33 field goals and all his extra points

• Linebacker T.J. Edwards, who had a breakout year with 130 tackles

• Defensive end Josh Sweat, who not only signed a big extension earlier in the season but also led team with 7.5 sacks

What can we really say about Jalen Reagor that hasn't been lamented about on Twitter or in your Eagles group chat already? The former first-round pick was taken ahead of Justin Jefferson. In his second season he caught just 58% of the balls thrown his way. He gained just 32 yards on 10 rushing attempts. He averaged only 7.7 yards per touch, fumbled twice in the regular season and once (almost twice) in the playoffs. He was a completely ineffective return man and is the No. 1 goat right now on a team that is otherwise pretty likable.

Roseman singled him out in his season ending press conference Wednesday:

"Certainly as we head into Year 3, we expected more," he said. "We had a chance to sit down with him after the season and had an honest conversation about the things that he needs to develop."

If Reagor is the receiving corps — and the team's — biggest loser, JJAW might be a close second. He didn't have the same kind of opportunity his teammate did, but the 2019 second-round pick was spectacularly invisible this season. He played in 16 games, had 170 snaps and caught two measly passes. He was okay on special teams and as a blocker, but in all, he's a waste of a roster spot, and another blemish on Roseman's draft record.

Most of the defensive ends

Josh Sweat had a breakout season after being extended by the Eagles, and had 7.5 sacks to pair with 13 QB hits and seven tackles for loss. He's probably the only defensive end you feel good about going into next year.

Derek Barnett showed the Eagles were right not to extend him, getting just two sacks and accumulating more untimely penalties than any single player ever should. Brandon Graham had a season ending Achilles tear that could alter the trajectory of the defensive leader's career. Ryan Kerrigan had three total tackles the entire regular season, even though he took 330 snaps (and did get a pair of sacks in the playoff loss to the Bucs). Tarron Jackson was a sixth-round pick this year and played OK as a rookie.

You can probably expect to see some new faces lining up on the outside next season alongside Sweat, perhaps from the first round of the upcoming draft or free agency.

Despite how little you probably care about punters, this one actually was kind of important this season. The Eagles are almost certainly going to need a new punter next season. The 29-year-old Australian played his first NFL season in 2021 and ranked 30th in average yards per punt. Of his 55 total boots, just 17 of them wound up inside the 20, in addition to his shanks in Week 18 and in the wild card round. A better punter could have potentially helped the defense big time.

Poor Jackson. After being converted from quarterback and having a great training camp, the 24-year-old injured his back in August and missed most of the regular season, battling to return. After catching a touchdown on his first pass upon his return to the field in Week 18, Jackson tore his ACL, which will likely have him out for the start of next season at least. Some really tough breaks for both the player and the Eagles, who need a second tight end pretty badly.

• Colts QB Carson Wentz, who collapsed and helped the Eagles get the 16th overall pick

• Right guard Brandon Brooks, who suffered yet another season-ending injury and could retire this offseason, according to a report.