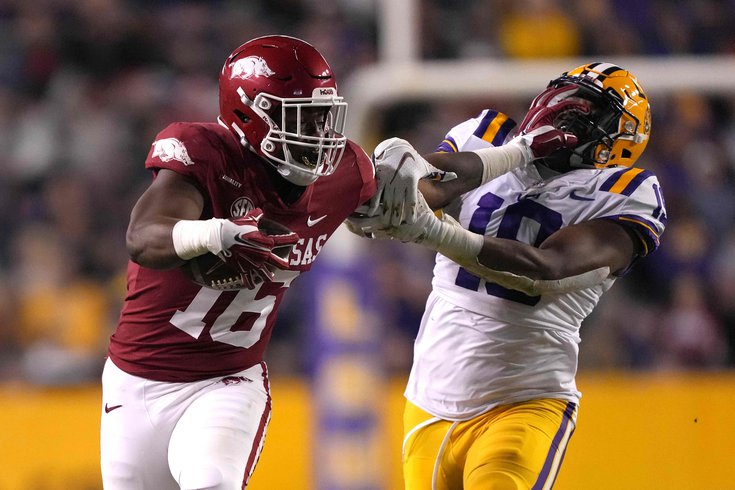 Is it too soon to kick off mock draft season the day after the Philadelphia Eagles' loss to the Tampa Bay Buccaneers in the wild card round of the playoffs? Uh, no. They have three first-round picks! So let's do this.

The Eagles currently have 10 picks total in the 2022 NFL Draft.

Ojabo is inexperienced, as he has only played in 14 career college games. He was born in Nigeria, and moved to Scotland, before heading to the United States for high school.

That makes his 2021 breakout season for Michigan all the more impressive, as he collected 35 tackles, 11 sacks, 5 forced fumbles, and 3 batted passes.

Barring unknown concerns, and assuming he performs well at the Combine, Ojabo is a lock first-round pick. The quarterback discussion aside, edge rusher is by far the Eagles' biggest need this offseason. Because the Eagles, Dolphins, and Colts all won a bunch of game in the back end of the season, thus messing up the Eagles' draft positioning, the Birds' chances of landing guys like Michigan's Aidan Hutchinson, Oregon's Kayvon Thibideaux, or Purdue's George Karlaftis are out the window.

Ojabo is in sort of that next passing rushing tier, and a somewhat risky mid-teens pick, but with very high upside. Don't argue here. You know they're taking a pass rusher, and they might have to reach juuuust a tiny bit to get one.

Lloyd has size, speed, production, and because he was a wide receiver in high school, he has the ability to make the most out of big play opportunities when they're there. A highlight reel:

MORE: Handing out 10 awards from the Eagles-Buccaneers wild card round game | Eagles still had a successful season, despite getting creamed by the Bucs

Burks is a big-bodied WR, at 6'3, 225, with versatility to line up in the slot, out wide, and out of the backfield, though he most often operated out of the slot at Arkansas.

As you might expect of a player his size, Burks is able to run through tackle attempts by much smaller defensive backs, and is a yards after catch beast. He also has good speed for a receiver his size, and is a threat deep down the field on 50-50 balls. As far as hands go, watch some of the circus catches he has made below.

I think the easy comp for Burks is the Titans' A.J. Brown, and the Eagles can obviously use more playmakers at wide receiver after whiffing on J.J. Arcega-Whiteside and Jalen Reagor in recent drafts.

If his listed measurements of 6'9, 380 pounds are accurate, Faalele will become the biggest human in the NFL when he is drafted. Oh and HEY, he's a former rugby player from Australia who doesn't have much American football experience! Remind you of anyone? Watch him overpower opposing defensive linemen:

Lane Johnson was a second-team All-Pro in 2021, and if he can stay healthy, he should have plenty of life left in his career, but there will always be concerns with his ankle.

Faalele is already good, but he is also something of a project that Jeff Stoutland can mold over time into a star player at RT who could take over for Johnson in 2024 and beyond.

Smith was a highly rated prospect coming out off high school (2nd in the nation, via Rivals), who had the best SPARQ rating in his recruiting class. (That means that he's an incredible athlete, in case you're unfamiliar with SPARQ.)

Smith had an immediate role in Georgia's defense as a true freshman, but his production has left something to be desired. 2021 has been his best year, as he had 53 tackles, 4.5 sacks, one INT, and three forced fumbles. Here he is against Clemson:

Smith hasn't yet declared for the draft, but I like him as a SAM in Jonathan Gannon's defense if he comes out.

The Bearcats had an outstanding cornerback duo in Ahmad "Sauce" Gardner and Bryant, who has racked up 9 INTs and 35 pass breakups over the least four seasons. A highlight reel:

The Kobe Bryant references will get annoying really quickly, but Coby Bryant is a smart corner who excels in zone coverage, and would be an easy fit in Jonathan Gannon's defense.

Over his career at Alabama, Robinson has been behind guys like Najee Harris, Josh Jacobs, Damien Harris, and Bo Scarbrough, and as a result only had 274 career carries in four years heading into the 2021 season. In 2021, it was finally Robinson's turn, and he carried 270 times for 1336 yards (4.9 YPC) and 14 TDs.

Robinson is a big back, as you can see, at 6'1, 225, and while he isn't often going to break off long runs, he is a hard runner who makes opposing defenders put him on the ground. He is also a competent pass catcher out of the backfield. A look:

He could be a younger replacement for Jordan Howard.

If you strip out positional importance, Araiza may very well be the best player in college football. Like, this dude has some kind of bionic leg. And he can hit! Yes, you will watch this punter highlight reel:

Araiza is also SDSU's kicker. He's a good college kicker, too, though he's not as good at placekicking as he is at punting. For his career, he's at 73.5 percent, and 96 of 97 on PATs. He had three makes of over 50 yards this season, though he probably won't kick in the pros, unless it's an emergency.

Arryn Siposs struggled mightily down the stretch for the Eagles, and needs to be replaced. Why not with a guy who might become the best punter in the NFL?

Kolar reminds me a little bit of a poor man's Zach Ertz in that he has great hands, he wins on contested catches against smaller safeties, he uses his body well to shield defenders from the football against man coverage, and he is savvy in finding holes in the defense against zone coverage. Also like Ertz, he's not going to wow anyone with his athleticism, he's not known as a great blocker, and he's not exactly a scary runner after the catch.

In four years at Iowa State, Kolar had good production:

With Tyree Jackson rehabbing a torn ACL, the Eagles cannot count on him to take a step forward in 2022, and they need more receiving capabilities from their No. 2 TE than what Jack Stoll can provide.

Back in September, Oklahoma State head coach Mike Gundy said that Sterling was done for the season with a hand injury. But, nope. After missing eight games, Sterling returned to action in November and played in OK State's final three games.

In the two previous seasons, Sterling had a combined 144 tackles, (19 for loss), 2 sacks, 3 INTs, and 12 pass breakups. He is an instinctive, intelligent safety, who clearly loves to play:

"He told our coaches on the sideline that if they run that route again, I'm going to step underneath it and run it in for a touchdown" pic.twitter.com/Pt0bUkZdIT

To be determined if Rodney McLeod and/or Anthony Harris return to the team in 2022, but the Eagles need more depth at safety either way.