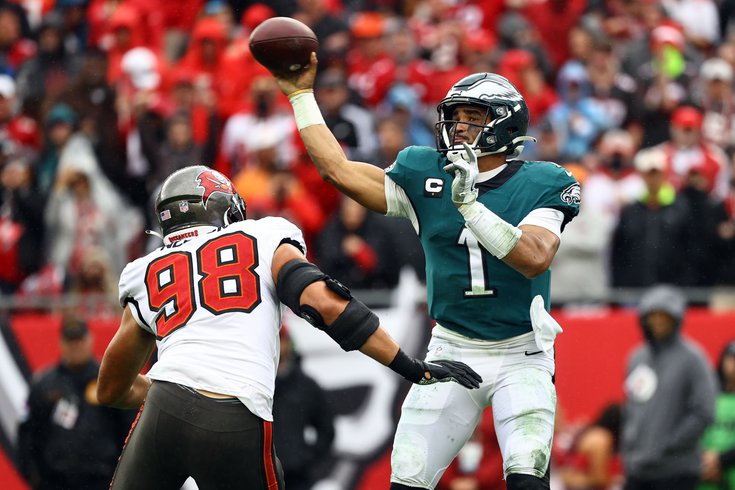 After a surprising, overachieving regular season, the Philadelphia Eagles made the playoffs! And then... (fart noise). The Birds were outplayed and outcoached by the Tampa Bay Buccaneers in a 31-15 rout that wasn't as close as the score would indicate. As always, win, lose, or tie, we hand out 10 awards.

Entering the season, the two biggest concerns about Hurts' overall game were his accuracy, as well as his decision-making and mental processing from the pocket. The latter improved at times over the course of the season, as was expected of a young, intelligent kid, but Hurts' inaccuracy lingered. In the playoffs, Hurts threw wildly all over the field, missing receivers long, short, left, right, and everything in between. He also missed some receivers who were open for potential big plays.

Hurts did a lot to make a case that he should be the Eagles' starting quarterback at least in 2022, but he was so bad against the Bucs in the playoffs that his last impression is going to be difficult to shake.

He finished 23 of 43 for 258 yards, 1 TD, and 2 INTs, which looks bad enough on paper, but the eye test showed that the passing game often didn't even look functional.

If the Eagles can upgrade the quarterback position this offseason, they should. It's the most important position in sports, and they shouldn't settle if there are opportunities to get better there. However, if the right opportunity doesn't come around, Hurts at least showed enough that staying with him for another season is a perfectly reasonable option as well.

The Eagles are significantly better than the worst teams in the NFL. They also have quite a ways to go before they're as good as the other teams that made the playoffs in 2021. The reality is that the teams that the Eagles beat this season had a combined record of 53-99-1.

When the Eagles were mowing down teams like the Jets, Giants, and the depleted Washington Football Team late in the season, they may have provided something of a false positive, with the playoff blowout loss to the reigning champs serving as a reminder that they still have a long way to go before they can compete with the best of the best.

MORE: Eagles still had a successful season, despite getting creamed by the Bucs

During the aforementioned late season run, the Eagles consistently got out to slow starts, but were able to overcome them. The "slow start" trend continued against Tampa, as the Eagles came out and played like crap in all three phases of the game, surrendering an early 14-0 lead.

Against a good team, and with a roster not constructed to be able to throw all day, the Eagles were pretty much cooked early.

After an absolutely dreadful regular season during which he had a paltry 299 receiving yards and had three games in which he actually had negative yards from scrimmage, Reagor punctuated his 2021 campaign with a team-deflating muffed punt.

He miffed another punt later, but was at least able to recover that one.

I know that a common sentiment will be that Reagor absolutely cannot come back to this team under any circumstances in 2022. While I certainly agree, we all know he'll be back, right? Beyond the salary cap hindrances (it'll cost more to cut him than keep him) he's a first round pick, the Eagles have zero depth at wide receiver, and the general manager has control over the 53-man roster. So you may as well mentally prepare yourselves to see him again in 2022. Maybe not as a starter, but he'll be back. Sorry. 🤷‍♂️

There was a notable line of demarcation in the quarterbacks that the Eagles faced in 2021. A visual:

The Eagles had some pockets of success against the Bucs, notably by the pass rush, but the soft coverages on the back end simply made life too easy on the best quarterback to ever play the game.

The stat sheet will show that DeVonta Smith was targeted 11 times against the Bucs, but most of that was in garbage time. The Eagles failed to get the ball in the hands of the best weapon in their passing game until it was too late, as Smith only had two targets in the first half, the same as Jalen Reagor, Kenny Gainwell, Miles Sanders, and Quez Watkins.

For much of the day, Bucs corners were giving Smith healthy cushions, and the Eagles didn't do enough to exploit that.

Goedert had a very good season and he led the team on Sunday with 6 catches for 92 yards, but a crucial drop in the first half helped stall a drive that might have otherwise ended with a touchdown. Against a team like the Bucs, you simply can't squander those opportunities.

The Eagles have to find a new punter in 2022. Siposs started the season competently enough, but he fell apart down the stretch. He had two shanked punts in a meaningless game against the Cowboys, and those struggles carried over in the playoffs.

Was this Kelce's last game in the NFL? He earned first-team All-Pro honors earlier this week for the fourth time in his career, and has made a strong case for the Pro Football Hall of Fame. He has also won a Super Bowl, and is a Philly legend for life. If he wants to play, he'll play, but he has accomplished everything a center could hope to accomplish in the NFL, and more.

Each year is a new decision on whether Kelce wants to continue forward, and if he does, there's little doubt that he'll continue to play at a high level. We'll see.

10) The 'Optimism' Award 📈: The Eagles' offseason ahead

What will become of Kelce and Brandon Brooks?

Is Jalen Hurts definitively the answer in 2022, or will the Eagles pursue quarterback upgrades?

How will the Eagles’ 3 first-round picks be used?

Will the Eagles make a splash free agency signing with a little more flexibility after an offseason in cap hell in 2021?

All of those questions (and plenty more) will be addressed this offseason, but one that will not is whether Nick Sirianni will be the Eagles' head coach in 2022. After a rocky start, Sirianni was the only first-year head coach to make the playoffs, and he solidified his standing with the team.

From a roster-building perspective, there's hope for the Eagles, when there was very little this time a year ago. As always, the offseason will be its own interesting ride.