The GM and coach Nick Sirianni discussed Jalen Hurts, the wide receivers, the draft and much more. 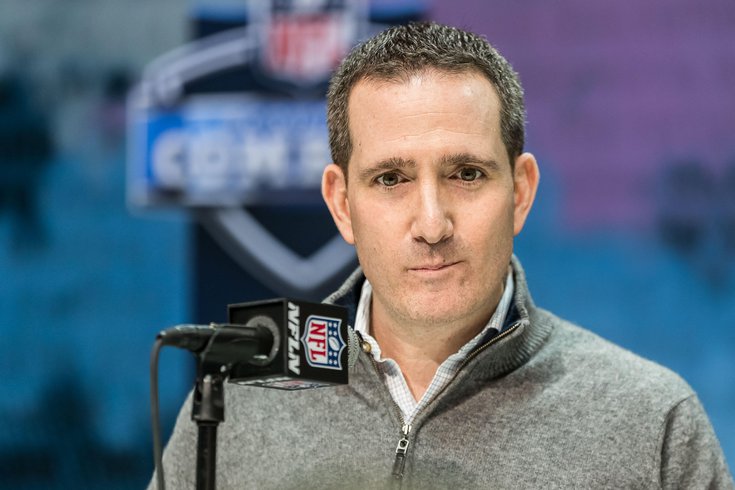 This is Howie Roseman at a different press conference, not the one he held today.

Eagles general manager Howie Roseman spoke with Philadelphia Eagles media on Wednesday, and fielded an assortment of questions, most notably about Jalen Hurts. Oh, and I guess Nick Sirianni was there, too, but we talk to him all year. A recap, and my takeaways.

"We talk about Jalen and the growth he had, really as a first-year starter and second-year player and leading this team to the playoffs," Roseman said when asked if he felt comfortable enough moving forward as the Eagles' starter going forward. "I’m tremendously impressed by his work ethic and his leadership. The last time we talked was during camp and we said we wanted to see him take the bull by the horn, and he certainly did that."

When asked if that was a yes, Roseman responded, "Yes."

Roseman was later pinned down further on Hurts' status as the starter, when he was asked, "Just for clarity sake regarding the quarterback, are you going into this off-season with the mindset that Jalen Hurts is your quarterback in 2022?"

He responded, once again, "Yes," and added, "I think for us, we have to do whatever we can to continue to help him develop. And how do we do that? By surrounding him with really good players, players who continue to grow. That's a huge part of developing, they grow. How they are in their second year is not how they are going to be in year four, five, six and seven. And they are also products of the people around them. That's on us to continue to build this team."

When asked if Hurts was made aware that he is the starter going forward, Sirianni said, "Jalen knows where he stands with us. He knows he's our quarterback. How do you know where you stand with a coaching staff? Because you communicate and you talk over and over and over and over again. And so, Jalen knows where he stands with us. I thought he did a great job of getting better throughout the year, as we've talked about, and so there's no secrets there. He knows he's our guy."

#JimmySays: Roseman and Sirianni didn't necessarily need to be that emphatic, but they were, which is interesting. Of course, it really doesn't mean much. What Roseman says during these year-end press conference very frequently doesn't align with the actions taken by the team during the offseason. See: Last year's "losing Carson Wentz would be like losing my fingers" speech.

For now, it does feel more likely than not that Hurts will be the starter in 2022, but if the right deal for an elite veteran quarterback becomes available, if you don't think they'll aggressively accept the opportunity to substantially improve at quarterback, think again.

MORE: Roseman says Hurts will be Eagles starter in 2022 — what other choice did he have? | NFC Hierarchy/Obituary: Divisional round edition

Sirianni said that he likes his staff, but noted that he is still having year-end meetings with each member of the coaching staff, and has not yet had his year-end meeting with Jeffrey Lurie.

#JimmySays: I wouldn't expect a lot of turnover on the staff, but there will very likely be some changes.

Roseman was critical of Jalen Reagor

"Certainly, heading into year three, [we] expected more from Jalen at this point," Roseman said. "We had a chance to sit down with him after the season and had an honest conversation about the things that he needs to develop and the things that we can help him develop to continue his growth, in terms of learning from anything. We have to do that. We have to continue to evolve."

Sirianni even volunteered the wide receiver depth chart heading into the offseason.

"I feel really good about the wide receiver group as a whole," Sirianni said. "I think you have a No. 1 guy in DeVonta Smith. I think he is a No. 1 receiver, and he continues to get better. Why do I think he's a No. 1 receiver? Because he can consistently win one-on-one, he can get the ball into his hands and make plays with the ball in his hand, maybe run a short pass. He catches everything. His competitive nature. I don’t think that there are a lot of true No. 1 receivers in the NFL, and I think we have one that is going to continue to get better.

"Then I look at Quez Watkins, as he's our No. 2 wide receiver. He has big-time speed, and he has a knack to make plays. Of course, you always want to get – the style of offense that we played this year didn't allow for Quez to get as many touches as he probably deserves, but we did everything we could do to win each individual game.

Sirianni also said some nice things about Greg Ward and J.J. Arcega-Whiteside, including calling JJAW an "enforcer" as a blocker, in the same way my eighth grade basketball coach would say at the annual banquet that the uncoordinated kid who wore Rec Specs who only played when we were up by 40, "really hustled."

Roseman may not be budging on the team's positional valuations, namely at linebacker

When asked about the team's avoidance of drafting linebackers, safeties and cornerbacks in the first round of the draft, Roseman said, "I think we have a philosophy on how to build this team, a philosophy that we think has been successful. Obviously, you'd like more championships every time you're out there, but we're going to stay committed to the way we think of building the team."

#JimmySays: I don't know what more the front office needs to see to bump up their importance of the linebacker position.

Is Roseman open to trading picks in this draft for picks in 2023?

"It depends on who is on the board," he said. "It's always an equation of if there is a guy on the board we think has incredible value for that pick, whether it's in the first round or second round, if we have a group of guys that we value similarly and we can move back, and I think because of the amount of picks that we have in this draft -- maybe even getting picks for 2023 and getting in a situation similar to this year where we have a lot of picks, we have a lot of value, that would be good. Of course, it will depend on who is on the board and the value of that player on the board."

#JimmySays: Roseman made an outstanding trade with the Dolphins last year, moving back from pick No. 6 to pick No. 12, and picking up a future first-round pick in the process. So, yeah, of course he'll be open to that again.

What is Fletcher Cox's standing with the team going forward?

Roseman addressed rumors that Cox was available at the trade deadline.

"I think, first of all, it's our job to listen to everything and see if there are ways to improve our team," Roseman said. "Obviously, Fletcher is a great player, and teams where we were at the deadline were making calls. And for us, it's important. Our priorities are always going to be along the line of scrimmage, and obviously having him and Hargrave, and you see the growth from Milton inside, that's a huge part of our defense and a huge part of our priorities.

"We communicate with our players. They know when things are going on, we'll be honest. We have honest communication. Fletch knew what was going on. We communicated with him. He's a guy that was a big part of the success that we had down the stretch. He can continue to take over games and be an incredible player, and we expect more from that going forward."

#JimmySays: The Eagles should have traded Cox last offseason when he had more value. Even at a lower value, they should still trade him this offseason, but we'll get more into that in our "stay or go" series.

The Eagles still aren't saying anything about Brandon Brooks

After Sirianni declined to say anything of substance about Brooks over the entire back half of the season, Roseman was asked about him. He said a bunch of words that didn't really mean anything.

#JimmySays: As I've been saying for a few weeks now, the bet here is that Brooks retires (and maybe pursues higher education).

"In terms of BG, we miss BG," Roseman said. "We miss BG the player, and there is nobody who can replace BG, the person, the leader that he is as well. We know he's attacking this rehab. We see him every day around here. And he has a chip on his shoulder, and we do see a role for him going forward, and we are excited to get him back next year. He's a huge part of our football team."

#JimmySays: Yes, BG will be back.