Howie Roseman says Jalen Hurts will be Eagles starter in 2022 — what other choice did he have? 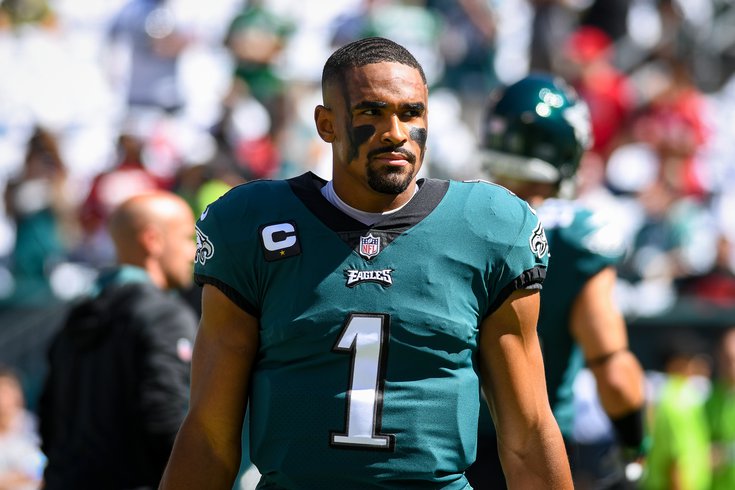 When Howie Roseman said, in no uncertain terms, that Jalen Hurts will be the starting quarterback for the Eagles next season, you probably had the same thought everyone else did upon learning the news.

What else is he supposed to say?

After all, this is the same general manager who, just over a year ago, said "when you have players like that, they're like fingers on your hand. You can't imagine that they're not part of you, that they're not here. That's how we feel about Carson."

Wentz was promptly traded for a conditional first round pick and as well as a third, and Roseman looks like a genius because of it.

Roseman was forced to address the move he made, after his pretty strong verbal commitment to keeping Wentz as his QB1 during his season-ending press conference alongside head coach Nick Sirianni Wednesday.

"I think when you look at any position opportunities come about in this league," Roseman said, "you have to make decisions as to what's best for the franchise. Last year with Carson, we had to figure out what made the most sense when we got the offer that we did. But us right now, here in this mode of trying to build this team and get as many talented players as we can to help us compete for a championship."

Hurts' situation is a lot different than Wentz' was last winter. He wants to be in Philly, and he is coming off a very mixed bag of a season that has created just as many believers as fans clamoring for a trade for Deshaun Watson or Russell Wilson.

“We talk about Jalen and the growth he had, really first-year starter, second-year player, leading this team to the playoffs — tremendously impressed with his work ethic, his leadership,” Roseman said. “The last time we talked was during camp and we said we wanted to see him take the bull by the horns and he certainly did that.”

Sirianni reflected this feeling himself, as his fortunes appear to be tied to the success of Hurts just as much as Roseman's are.

Hurts led all NFL quarterbacks in rushing yards, set a team record for rushing TDs by a quarterback and showed lots of flashes of being a franchise quarterback. He also missed a bevy of open receivers, often held the ball too long and made frustrating mistakes throughout the season (though he did limit his turnovers).

"I think for us, we have to do whatever we can to help him develop," Roseman said. "How do we do that? By surrounding him with really good players. Players continue to grow, that's a huge part of developing. How they grow, how they are in their second year isn't how they are in years three four five six and seven. They're also products of the people around them and that's on us to try and continue to build this team."

Roseman and the front office may never have a better opportunity than they do now to land an elite quarterback. With some cap space, three first round picks as ammo and a ton of young, tradable talent on the roster he will have to resist the urge to try and hurt the supporting cast to improve the quarterback.

But according to Sirianni, Hurts intends to become that elite signal-caller himself.

"I am pleased with the way he developed as a passer, as a quarterback," the coach said. "We have seen so many things he got better at and that goes into, first and foremost Jalen and the football character he has, the desire and want to for how much wants to be an elite elite elite player in this league."

Anything could happen. Especially with Roseman. It wasn't long ago that he shockingly was able to trade Sam Bradford for a first round pick from the Vikings. Or that he made two huge trades in 2016 to trade up to the No. 2 spot in the draft to select Wentz. And his chances of landing a first round pick for Wentz after his horrible 2020 season and refusal to play in Philadelphia — too — is a prime example of Roseman's willingness to make a change at quarterback, at any moment, if the price is right.

But for now, and in all likelihood it will be Hurts under center come September when the Eagles kick off what is sure to be a 2022 season with much higher expectations.

What else did you expect to hear?