The Eagles could potentially play in Mexico City this season

A 2022 Eagles opponent is hosting a game in Mexico City 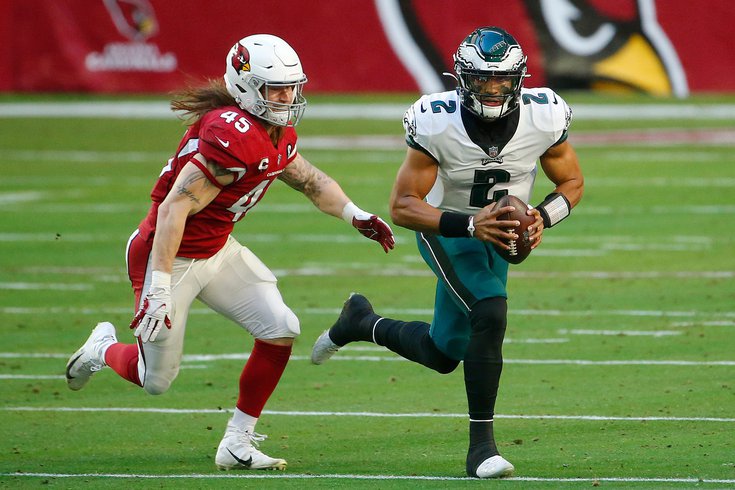 Jalen Hurts scrambles against the Cardinals in a road game in 2020.

Eagles fans looking for 2022 road game vacations may want to make sure their passports are up to date. The NFL has announced the five teams who will host international away games this season:

The Jaguars are certainly accustomed to their yearly London “home” game at Wembley Stadium. The Packers and Saints will also be heading across the pond and playing their respective games at Tottenham Hotspur Stadium. Perhaps Green Bay can snag Harry Kane as a kicking upgrade over Mason Crosby.

Tampa Bay will host the NFL’s first ever game in Germany. Rob Gronkowski may go back into retirement because long-time buddy Tom Brady is hanging up his cleat, but Gronk doing an authentic Oktoberfest would be a sight to see.

How does this relate to the Eagles? The Cardinals will be playing in Mexico City this fall. Arizona previously played in Mexico City in 2005 during the league’s first-ever international regular season game. Given that both the Eagles and Cardinals finished in second place in their respective divisions in 2021, they will face off at some point this upcoming season due to the NFL’s scheduling and parity rules.

The Eagles are one of the nine teams that Arizona will play at home this season, leaving them eligible to face off in Mexico City. The Birds have previously had only one regular season international game. That was back in Week 8 of the 2018 season when they traveled to London and took down the Jaguars 24-18.

If I had to a ranking of potential road game trips for Eagles fans that included a theoretical game in Mexico, here’s how I’d rank them:

1. Arizona Cardinals (Weather would be welcomed!)

2. Indianapolis Colts (If Carson Wentz is still under center for them.)

4. Houston Texans (Rub it in their fans faces about Philly having James Harden?)

6. Dallas Cowboys (How far are Eagles fans willing to go into enemy territory?)

8. Washington Commanders (That’s the consensus worst stadium in the NFL.)