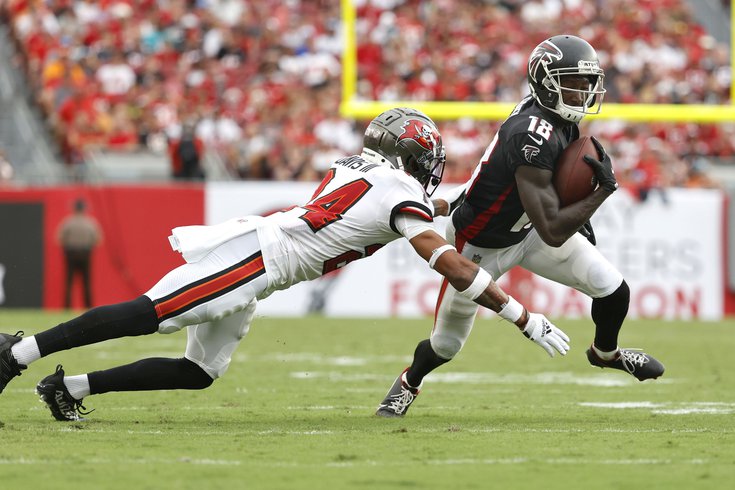 Wednesday afternoon — a quiet one on the NFL front with a rather mundane Week 18 approach that will see many teams, including the Eagles, with very little to play for — a little piece of news percolated out of Atlanta.

Asked if Calvin Ridley’s future with the Falcons is in jeopardy @wyche89 tells @MikeBellATL & @putemupcdukes “I’d think so. The fact that he and the team have been so quiet and he hasn’t surfaced, it appears like both sides could be looking for a fresh start.” #dirtybirds

Ridley left the Falcons due to an anxiety issue, similar to the one that cost Lane Johnson some playing time earlier this season. If indeed a change of scenery is in the cards for Ridley, there will certainly be a ton of interest.

The Eagles should have an abundance of interest. Aside from rookie sensation DeVonta Smith, there is really no one at wide receiver the team would not be willing to replace. They have a need. They also have plenty of cap space as both the number will rise in 2022, and Carson Wentz' historic dead money hit will be over and done with next season.

Ridley will be playing on his fifth-year option year for around $11 million before he becomes an unrestricted free agent in 2023. He is basically a rental right now, which could bring the price down for a potential suitor, but Philly would no doubt want to sign a contract extension with the wideout if he comes to the city.

The former first round pick is just 27, and is an Alabama product — a school the Eagles have a lot of rich ties to now with Smith and quarterback Jalen Hurts leading the offense.

Whether Howie Roseman wants to get into a bidding war and make a splash is yet to be seen, but with a young playoff roster already, draft picks to spare and room to spend, a Ridley-like move would be a fantastic one for the team to make as it looks to improve next year.

It's worth mentioning that the 2022 wide receiver free agent class is going to be absolutely loaded, boasting Chris Godwin, Devante Adams, Allen Robinson, Mike Williams, Christian Kirk, Odell Beckham Jr., Will Fuller, JuJu Smith-Schuster and more (though some of them may be franchise tagged). That likely helps the Eagles case should they prefer Ridley, as other teams will have opportunities to get WR1's without having to trade away anything.

All in all it looks like the upcoming offseason will be a wild one.