Where will the Dolphins' first-round pick, owned by the Eagles, likely land in the 2022 NFL Draft? 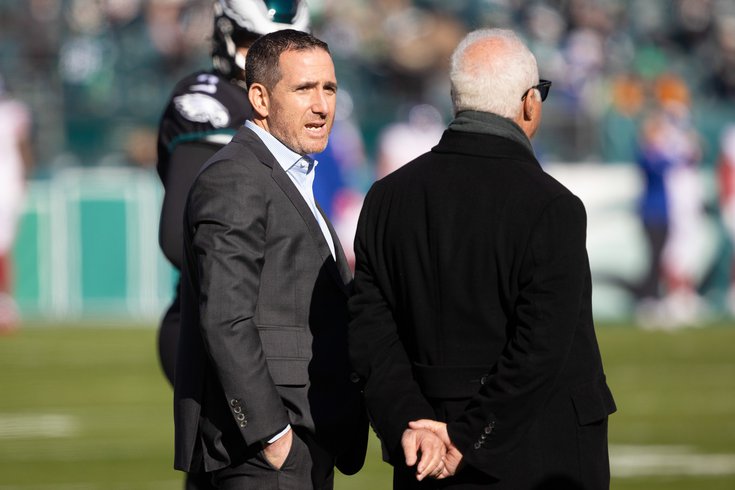 The Miami Dolphins were eliminated from playoff contention after (a) they lost to the Tennessee Titans on Sunday, and (b) outcomes of other AFC games did not go their way.

As a result, Miami's first-round pick — owned by the Philadelphia Eagles — will be higher than pick No. 19, where the playoff teams' picks begin. But let's dig a little deeper, and narrow down the likelihood of where that pick will ultimately settle in.

If the season ended today (it doesn't), the Miami pick would be 14th overall, as shown here on Tankathon.com. 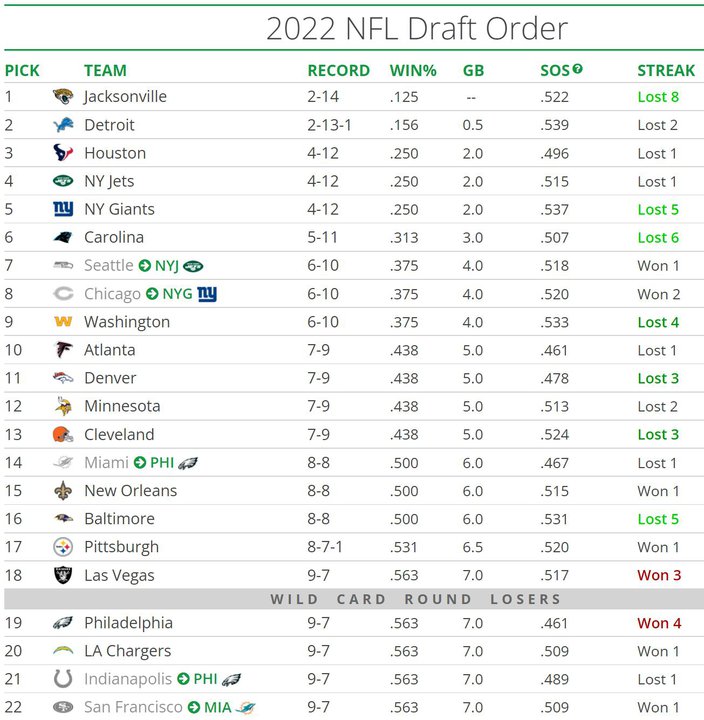 If you'll notice, there are four teams ahead of the 8-8 Dolphins in the draft order with 7-9 records. They are the Falcons, Broncos, Vikings, and Browns. Two teams — the Saints and Ravens — have the same record at 8-8, while the Steelers (8-7-1) and Raiders (9-7) both have better records. And then there are a trio of 9-7 teams in the Chargers, Colts, and 49ers who would be in the playoffs if the season ended today, but who have not yet clinched. You're welcome for pointing out the obvious. Cool, moving on.

If the Dolphins lose, how high can that pick climb in the draft order?

If the Dolphins lose, they will be 8-9. If any of the currently 7-9 Falcons, Broncos, Vikings, or Browns win, they too will be 8-9. #Analysis. The first tiebreaker on draft picks is strength of schedule, as denoted in the Tankathon screenshot above in the "SOS" column. In terms of draft positioning, the team with the worse (lower) strength of schedule picks first.

As you can see, the Dolphins' strength of schedule is 0.467. A visual:

The Dolphins would pretty easily pass the Vikings and Browns if either or those two teams won and Miami lost.

Did any of that make sense? Are you still awake?

The Cliff's Notes are that it's possible that the Dolphins can get as high as pick No. 10, but that's extremely unlikely. A Dolphins loss would realistically land them at pick No. 12, No. 13, or right where they already are at pick No. 14.

MORE: Eytan Shander: Why the Eagles should play their starters against Dallas | Eagles vs. Cowboys: Five players to watch

If the Dolphins win, how far can that pick fall in the draft order?

If the 8-8 Saints lost, and Miami won, the Miami pick would drop below them, obviously. If the Saints also won, the Dolphins would easily remain ahead them based on strength of schedule (the Saints are currently at 0.515).

Because the 8-8 Ravens play the 8-7-1 Steelers — assuming no ties — the Dolphins would fall behind whichever of those teams lost. They would remain ahead of the team that won.

Also, the Raiders play the Chargers. No matter which of those teams loses, the Dolphins would easily remain ahead of them on strength of schedule. The same goes for Indianapolis and San Francisco, if they don't get in.

The furthest the Miami pick can realistically fall is to pick No. 16.

What will the Eagles' own pick likely be?

One other quick note is that if the Eagles' lose Week 18, and then they also lose in the wildcard round of the playoffs, they will almost certainly have the highest pick among all the playoff teams, at pick No. 19, as they will easily beat out any team that also finished the regular season at 9-8, on strength of schedule. Certainly, nobody affiliated with the Eagles wants to lose the playoff game, but it does serve as extra incentive to rest starters Week 18.