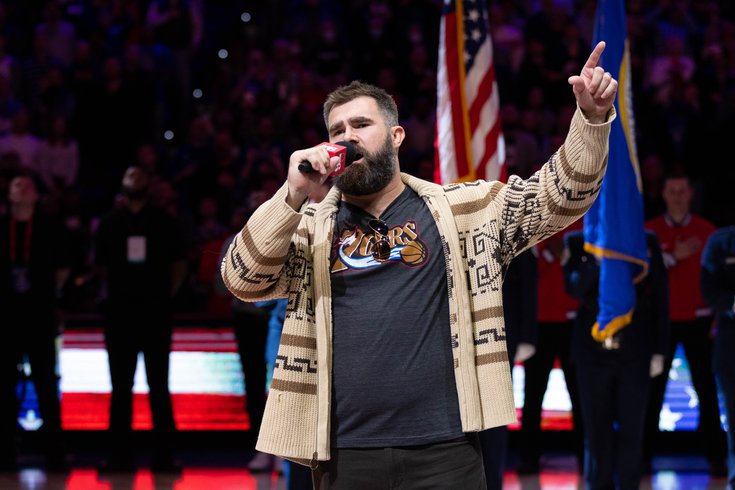 Eagles center Jason Kelce sings the national anthem ahead of the Sixers' game against the Denver Nuggets on Monday.

Like the headline says, Jason Kelce can and is doing just about everything right now.

The latest being singing the national anthem ahead of Monday night's Sixers game. For an NFL center singing, it went about as well as you would've expected. Still it was cool, undeniably a Jason Kelce move, and for a good cause.

THANK YOU to @JasonKelce for taking up the #MTWBchallenge, and to EVERYONE else who donated to us at https://t.co/IGxGjknxEX! Your generous spirits are helping to keep our work with community and public spaces rolling, and we’re so happy to share this moment with you. pic.twitter.com/4zefRZleI5

Kelce singing the anthem was a promise on a fundraising drive to former teammate Connor Barwin's Make The World Better Foundation. If the organization could raise at least $100,000, Kelce sings the anthem at a Sixers game. They raised more than $114,000.

"I know Kelce can sing and somebody had this idea and I was like 'Ahh it's tough,'" Barwin, now an assistant in the Eagles' front office said prior to tip-off. "But we're not actually gonna raise $100,000 and sure enough we did and I was like 'Hey, man. You kinda gotta sing the national anthem now.'"

"I don't think I've been nervous really, like NERVOUS nervous in years," Kelce said before his big performance. "I'm NERVOUS nervous right now. This is like my knees were shaking out there doing the soundcheck, so we'll see how this goes."

Jason Kelce's won a Super Bowl, given the speech of a lifetime, and is generally a living legend.

But he has to admit... singing the National Anthem before Monday's Sixers game has him shook 😅 pic.twitter.com/kuy3SzDQRJ

The Sixers game itself? Memorable in a not so great way, but you can read all about that here.

Kelce was a guest host on 94 WIP last week then announced he will be returning to the Eagles for a 12th NFL season.

Coach Nick Sirianni said back in January that he sent the 34-year old All-Pro two kegs of beer to convince him to come back. They were received.

When the time does finally come for Kelce to hang up the cleats, he's got options. He's clearly a man of many talents.