Did someone say cannoli pancakes? 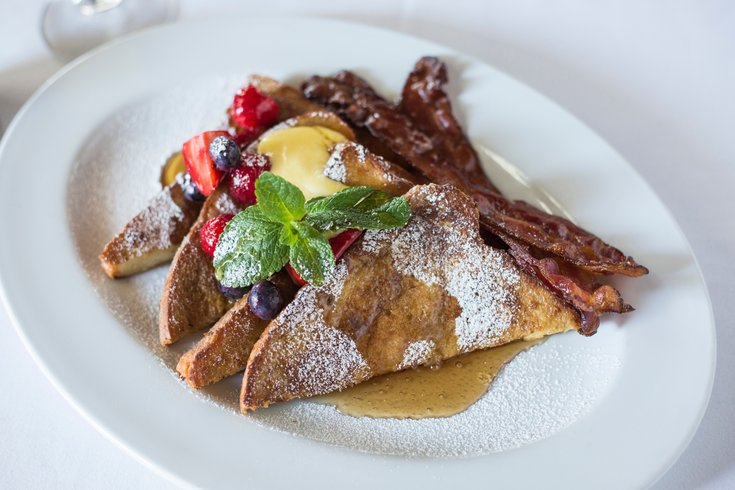 Mother’s Day is right around the corner on Sunday, May 12, and what better way to celebrate all things mom than with a little brunch at your favorite spot.

From Old City to the Art Museum, there are a number of places in the heart of Philly that are offering specials for Mother's Day.  Sporting specials or even a Mother's Day brunch menu that will surely impress the best mom in the world.

With not much time left to make a reservation, it's probably best to reserve your table now.  It's always best to plan these things (even if you weren't planned.) Though, I guess if you end up forgetting and every place is booked and you end up having to take her somewhere like Pat's or Geno's for a cheesesteak - that's fine. She'll be fine with it. Why wouldn't she be? It's not like she gave up the last bit of her youth to give birth and raise you. Oh wait...

So, yeah, maybe on second thought, you should peruse this list a bit thoroughly and take her somewhere nice.

Garden Restaurant at the Barnes Foundation (2025 Benjamin Franklin Pkwy) will feature a Mother’s Day Brunch. The menu offers items such as lemon herb chicken with asparagus and wild mushrooms, New York sirloin and smoked salmon. The pricing for this special menu is $55 for adults and $15 for kids under 10.

Stir at the Philadelphia Museum of Art (2600 Benjamin Franklin Pkwy) will feature a prix fixe menu for $49 per person. The menu includes appetizers such as beet cured deviled eggs, vegetable crudité, and smoked trout toast. There will be a  choice of seven different entrees which include crispy potato cake Benedict and blueberry ricotta pancakes. There will also be an assortment of desserts for the table, including cake bites and truffles. Guests will also have a choice of a Bellini or mimosa.

Urban Farmer (1850 Benjamin Pkwy.) will feature a special brunch menu for Mother's Day, which includes deviled eggs for $14, crab avocado toast for $20, and spring lamb hash for $20. Steak will also be available to indulge your mother. There will also be a cart full of ingredients so you can build your own Bloody Mary for $16.

Scarpetta (210 W. Rittenhouse Square) will feature a special brunch menu for mom that includes a decadent lobster omelette, a chilled lobster salad, and short rib and bone marrow agnolotti. The menu starts at $14 for small plates and $22 for large plates.

Barclay Prime (237 S. 18th St.)  will be going all out for its Mother’s Day dinner. The luxury steakhouse will be serving everything from lobster bisque to Alaskan crab cocktail. There will also be an assortment of its award-winning meat cuts available on the menu.

Square 1682 (121 S. 17th St.) will feature a special on mimosas and Bellinis for $2 a piece. The restaurant will serve its regular brunch menu, which includes huevos rancheros, jerk chicken and grits, ricotta and blueberry pancakes.

Ocean Prime (124 S. 15th St.) will be serving braised short rib surf and turf for $22, lobster toast for $24, and their signature Bloody Mary will come with jumbo shrimp for $16. The steakhouse will also have a $9 blood orange mimosa.

The Twisted Tail (509 S. 2nd St.) will sport a very special southern-inspired Mother's Day buffet from 10 a.m. to 4 p.m. This buffet will include meats such as porchetta and spring leg of lamb, and include omelets and waffles. The buffet will be $48 for adults and $25 for kids 3-10.

Amada (217-219 Chestnut St.) will feature a mother’s day only specials which include 'Heuvos Iberico,' which is steak, fried eggs, potatoes, and pimento hollandaise sauce, as well as 'Horno,' which is a special saffron and Mahon cheese grits with poached egg. The restaurant will also offer its regular brunch menu, which includes tapas and even sangria pancakes.

Cuba Libre (10 S. 2nd St.) Brunch service will include à la cart menu as well as the regular brunch menu, 'Especial de Brunch,' which includes an option of one small plate and one large plate for $22.95 per person. The specials include a red snapper, an ancho-honey glazed salmon, and for dessert there will be a strawberry shortcake.

Red Owl Tavern (433 Chestnut St.) will feature a Mother's Day brunch menu that includes a mixed berry baked French toast for $17 and a wild mushroom and leek quiche for $16. It will also feature the restaurant’s regular brunch menu, which includes indulgences such as the beef cheek Benedict and an egg white omelet.