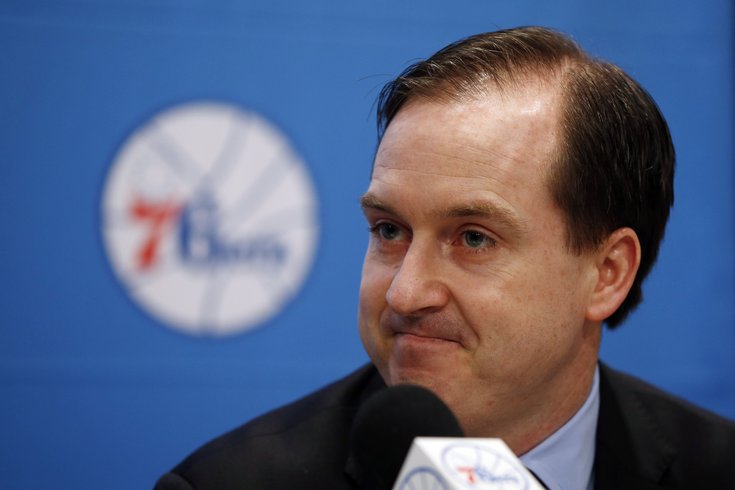 Hinkie died for this.

If you've been firmly entrenched in your anti-Sam Hinkie, anti-Process position since Day 1, then today is not your day.

Spurred on by Spike Eskin and Mike Levin of the Rights to Ricky Sanchez Podcast – and immediately following the official announcement of the Sixers trade with the Celtics to move up to No. 1 in Thursday night's NBA Draft, a trade in which the Sixers basically traded Michael Carter-Williams for Markelle Fultz – Sixers fans began unleashing hell on Process-doubters (both local and national) by exposing their terrible takes on Twitter.

Basically, Sixers fans, specifically those on team #TrustTheProcess, are retweeting analysts, media members and even fans with the #RTArmageddon hashtag as they celebrate the news of the deal, and specifically Hinkie's role in the deal. Sure, Bryan Colangelo pulled the trigger, and deserves credit for that, but basically all the component parts od this trade have Hinkie's fingerprints all over them.

The third pick this year came via his 2015 pick-swap deal with the Kings; the 2018 Lakers pick came in the MCW trade; and if that doesn't convey, the Celtics get the 2019 Kings pick, which also came along with Nik Stauskas from the Kings.

UPDATE [8:05 p.m.] – The legend of Joel Embiid continued to grow on Monday night. The Sixers center (dubbed "The Process") has joined #RTArmageddon, taking a shot at none other than Howard Eskin for saying forward Dario Saric would never come over.

no idea. Embiid may never play meaningful minute. Saric may not come next year. And no way they use all 1st Rd pks https://t.co/tP9WFEGQAk

And now, here's a look at some of the best we've seen so far (we'll continue to add to this as more takes are exposed):

Did we miss any? Hit us up on Twitter or leave them in the comments below.

MORE: Sixers-Celtics trade now official, with weird protections on Kings pick as well | After bold, brilliant trade, the Sixers can no longer preach patience | What they're saying about Sixers: (Almost) everyone loves trade for No. 1 pick, how Fultz fits | Grading the trade: Sixers acquire top overall pick Markelle Fultz from Celtics