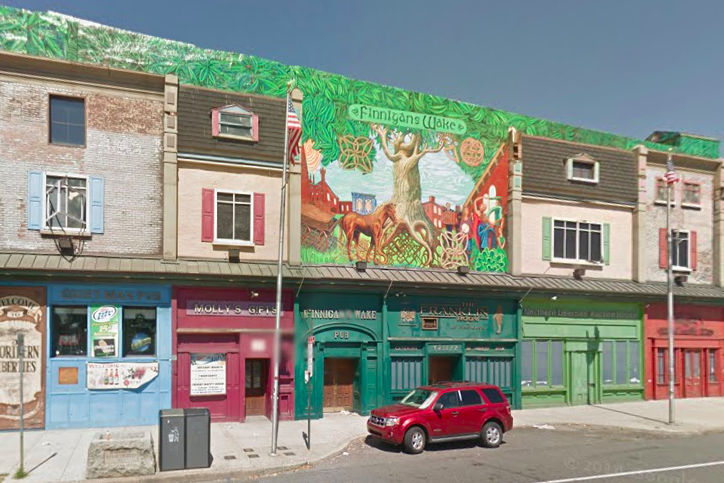 The colorful husk of Northern Liberties' Finnigan's Wake, a pub that once doubled as an Irish haunt and a local Democratic enclave, could soon gain support for an office redevelopment after Philadelphia City Councilman Mark Squilla proposed a bill on St. Patrick's Day to rezone the surrounding blocks at 3rd and Spring Garden Streets.

The bar, which opened in 1997, has sat dormant since late 2014, when an agreement of sale – somewhere in the vicinity of $3.9 million – fell apart and plans to refashion the controversial landmark ground to a halt.

This week, Councilman Squilla reintroduced a proposal that would upgrade commercial zoning to CMX-3 at 2nd, 3rd, Spring Garden, and Green streets, according to Plan Philly.

Squilla and City Council had previously downgraded the zoning to CMX-2 amid reservations within the community, which once strongly opposed an abortive redevelopment plan in 2012 that would have installed upper-level balconies and eliminated a strip of N. Bodine Street along the eastern side of the building.

As Hidden City Philadelphia explored in detail last year, the property has a fascinating history. It was constructed in 1906 for the United States Paper Box Company, which later sold it to the Datz Manufacturing Company, a box maker, in 1921.

Two decades later, in 1947, it was nearly destroyed completely by a massive fire, but the F.B. Davis Company rebuilt it and Datz remained there until 1957. The final owner of the property before the bar came around was coffin maker Standard Casket.

While Finnigan's Wake is often recalled as a boisterous neighborhood nuisance, the building's vacancy has felt a bit ominous along that stretch of Spring Garden. The beautiful "In the Shadow of the Wood" mural, painted by Paul Santoleri in 2006, survives as a memento of the bar's heyday.

If Squilla's bill to rezone the property goes through, the envisioned redevelopment would likely be a proposed office space, details of which have not been revealed. If that's the building's fate, it would be two blocks east of the massive, millennial-focused SoNo co-working space slated for a warehouse renovation at 5th and Spring Garden.