Biologist demystifies crow's ride on back of eagle 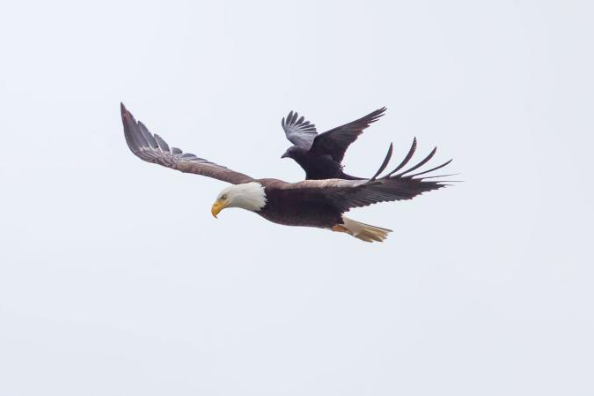 California-based photographer Phoo Chan caught a sequence of photographs showing a crow land on top of an eagle for a ride mid-flight.

Wild animals seem to have discovered that humans use them for memes. A few weeks ago, we were treated to this maniac raccoon riding on the back of an alligator in Florida's Ocala National Forest.

Raccoon hops on alligator's back and goes for a ride! http://t.co/9Z33KpxTKV pic.twitter.com/cPeTHNHTxh

It's not even something people would really think of staging, if your initial reaction was to doubt this actually happened. According to WFTV, a family out photographing some gators just happened to startle a raccoon onto the gator's back for a brief but glorious moment.

Now comes another strange incident out of Seabeck, Washington, where California-based photographer Phoo Chan captured a sequence of photos showing a crow alight on the back of an eagle in midair.

According to a biologist who specializes in crow behavior, the bird was likely in the middle of a territorial attack when it landed briefly on the eagle's back, National Geographic reports. Even the presence of a larger bird provokes a defensive reaction. In this case, the crow got closer than smaller birds typically do and settled in for the ride.

"This would be kind of like a dog chasing a car and jumping up" on it, says McGowan of the Cornell lab of Ornithology. "Dogs always want to catch the car, but they never know what they'd do if they get it."

As the largest bird of prey, Eagles are constantly heckled by littler species. McGowan says it sometimes looks like mosquitos.

According to a photo editor at National Geographic, Phoo Chan's presentation of an entire sequence means the photos are almost certainly legitimate. McGowan backed this contention by explaining the general behavior is not out of the ordinary, although the landing is unusual.

The pictures appropriately surfaced right before Independence Day in a uniquely American display. As for animals riding on backs, we all know where this began, but what will come next?