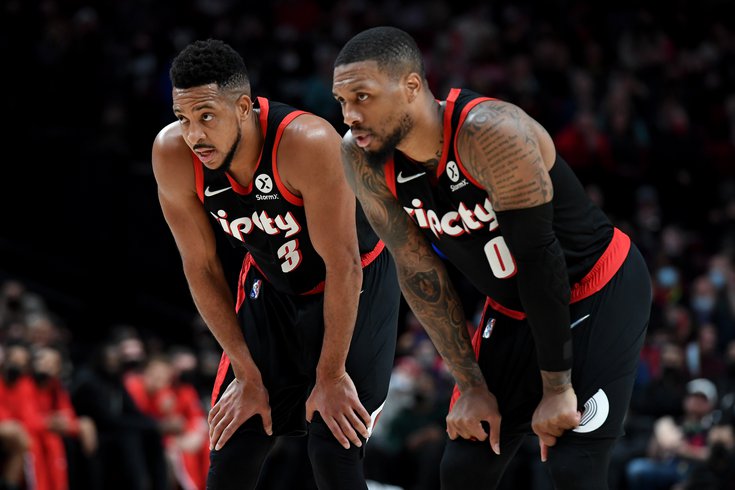 The Portland Trailblazers fired longtime executive Neil Olshey on Friday, the team announced in a statement, ending his reign as general manager and president of basketball operations after nine years with the team. Olshey, who was under investigation by a third party regarding his conduct in the workplace, was let go as the team strives to "build a more positive and respectful working environment" in Portland.

While it's not as splashy as a star player asking out, Olshey's ouster has the potential to send shockwaves around the league and certainly within the Blazers' organization. And while your mind might drift to how this impacts Damian Lillard's line of thinking (more on that in a moment), the most immediate side effect may involve another Blazers player, depending on how things shake out at the management level.

Hired in June 2012, Olshey's first draft in charge of the Blazers was a landmark moment for the franchise, as Portland came away with small-school star Lillard with the sixth overall pick. Lillard has exceeded any reasonable expectations for his career in the time since, transforming into one of the league's most dangerous offensive centerpieces, his slow start to the 2021-22 season notwithstanding. One year later, the Blazers scooped CJ McCollum with the tenth overall pick — one slot before the Sixers drafted Michael Carter-Williams — to form the backcourt that has driven Portland to eight consecutive playoff appearances heading into this season.

As time has worn on, however, many around the league have openly questioned whether that partnership is one that can be the foundation of a title-winning team, noting the overlap in skill sets, opportunity cost, and defensive issues that those two have had playing next to one another. Those questions have certainly bounced around the city of Portland, too, though Olshey's presence complicated matters quite a bit.

It is an open secret in league circles that Olshey viewed CJ McCollum as "his" guy to take credit for, a supposed testament to his own ability to identify talent from a non-prestige program. Though Olshey was technically in charge of the Blazers' basketball ops during the 2012 Draft, the selection of Lillard is and was largely viewed as a win for the scouting department and entrenched members of the organization, with Olshey not having anywhere near enough time to influence the draft process in the few weeks he had before the pick in June 2012. By comparison, the 2013 Draft was the culmination of his first full year in charge of the team, McCollum a feather in his cap that he has pointed to with some frequency since.

For years, people close to the situation have suggested that Olshey let that dynamic blind him as the Blazers have tried to make the leap from a consistent playoff team to an actual contender. As the Blazers have tried to find the right mix around Lillard, trading McCollum was a popular idea externally but viewed as crossing the rubicon internally. Some have even suggested that Olshey would have been willing to trade Lillard before moving McCollum, though that speculation will now remain a thought experiment permanently.

With that context, this situation could head in a number of different directions. There are two that are most pertinent to the Sixers as they continue to entertain Ben Simmons trade possibilities:

Option two is what most people in Philadelphia will be hoping for, including those at the management level for the Sixers. But frankly, it would be a huge pivot from Lillard given that he has repeatedly and consistently told the public he is committed to the Blazers. Maybe this is the straw that breaks the camel's back, but trying to spin it that way requires ignoring everything Lillard has said in public to date.

The first path seems more realistic. McCollum is not without his warts, and his contract is sort of an eye-of-the-beholder deal, but he is a high-level scorer with on-and-off-ball utility who has maintained excellent efficiency from deep as his volume has increased over the years. From where we sit today, he's shooting 39.6 percent from three on over eight attempts per game, blending catch-and-shoot reps with off-the-dribble sniping to great effect. And that contract, regardless of your personal take on it, could be swapped for a multitude of players or player-pick combos should they decide to make that call.

Any outcome that results in Portland looking to move more aggressively to surround Lillard with talent is probably bad news for the Sixers, who still covet Lillard above all else in Portland. It would signal a belief from the Blazers that Lillard can be convinced to stick it out long-term as long as he is satisfied with their efforts to bring the team closer to contention, and depending on who they'd be able to acquire for McCollum, they could very well get better as a team, if not immediately in record than perhaps as a more evenly distributed collection of talent, trading their surplus of shooting and scoring for a tougher defensive edge.

(It would be fair to ask at this stage of the game if the Sixers should view a Lillard-esque deal as a realistic Simmons return, and whether they should consider a McCollum-centric deal a little more themselves. His inability to get to the free-throw line would be an immediate offensive concern, but he's a trustworthy crunch-time option who would open up the floor and combine with Embiid for some interesting two-man looks. Assuming they don't move either before then, the Sixers would also have $75 million coming off of the cap sheet in the summer of 2024 between McCollum and Tobias Harris. But for now, my operating belief is that they're aiming higher than McCollum, or younger and cheaper if they can't get a grade-A star.)

In any case, there is at least uncertainty in Portland, and the Blazers are stuck in the mud on the floor to boot. With promises that the team would improve defensively under a new coach with a new system, Portland has continued to drown on that end and has often looked miserable doing so, transitioning from Terry Stotts' more freewheeling style to a demanding Chauncey Billups. The next executive in charge (and Joe Cronin is the interim GM for now) will be forced to figure out how to pull Portland together on several fronts.

The Sixers aren't exactly a picture of stability these days, but uncertainty elsewhere is something they'll welcome, as they continue to look for avenues to improve the team around Joel Embiid.