The Sixers' win over Magic was as ugly as it gets 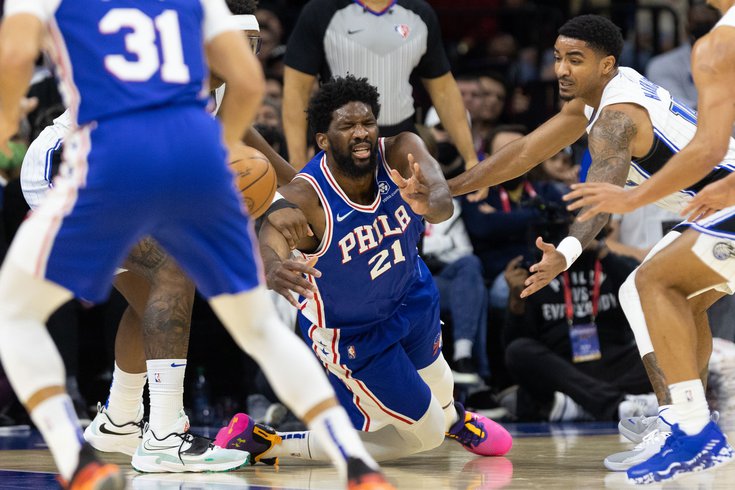 Philadelphia 76ers center Joel Embiid struggles to get a pass off against the Orlando Magic and guard Gary Harris.

For once, it appeared the Sixers were in for an easy night at the office. Up against a 4-win Magic team with their full rotation finally available once again, they raced out to a 19-4 lead out of the chute, looking like a team ready to rest the starters in the fourth quarter. But the script fell apart in the third quarter, with the Sixers eventually salvaging a win that saw them tied with Orlando with only 57 seconds left in the game.

Needless to say, no one was enthusiastic about squeaking by one of the worst teams in the league, head coach Doc Rivers leading the charge.

"It was a win, I'm not inspired," Rivers said. "I thought the first six minutes we played pretty much the right way with a lot of energy, and then after that, I just didn't think we played very well...I'll take any win, I'd rather win these than lose these, so you'll take them and keep pushing on."

Let's hit a few of the finer points and leave this one in our rearview mirrors.

In search of a way to junk up Philadelphia's offense, the Magic turned to a zone look early in the third quarter, using it on and off for a lot of the second half. It was a wrinkle the Sixers didn't sound prepared for after the game, as Tobias Harris sheepishly admitted during postgame availability.

"I thought when they first presented it in the third quarter, it kind of stunned us a little bit," Harris said Monday.

That much was obvious watching it in real-time. One of Philadelphia's consistent problems over the years has been the reluctance of their shooters to get shots up. Tobias Harris has often been the face of that issue, but it now applies to at least two guys in the starting group (Harris and Tyrese Maxey). They're much better equipped to beat zone broadly speaking, but that would require actually making a real effort to beat the zone.

Flat as can be for most of Monday's game, the head coach summed the problem up like so.

"It's hard to beat a zone with no movement, no downhill attacks, it was the slowest zone offense maybe ever," Rivers added. "We finally came out of two timeouts and ran our zone offense and scored both times because there was pace. The ball just was sticking tonight, it wasn't moving, we didn't get to the paint."

Cutting a bunch of clips of guys standing around or passing up clean looks from three isn't my idea of a good time, so we can move on and assume they won't look this inept vs. zone defense anytime soon.

Joel Embiid is getting closer to being the ultimate offensive weapon, a physical brute with range out to three who can also manipulate the officials, highlighting every reach and overstep from a defender at an expert level. As his passing catches up to the rest of his game, he continues to improve as he hits his late 20s.

The cost of trying to win the foul game, though, is you're going to end up throwing shots up like these from time to time, a potential rip-through move turning into a desperate heave at the basket when things don't go as planned.

If that was the only problem Embiid had against the Magic, the Sixers probably would have beat them comfortably, but he just never really arrived in this game despite filling up the stat sheet. With his touch evading him for most of the night and Franz Wagner keeping him off-balance on various drives to the basket, most of Embiid's impact in this game was limited to short bursts at the beginning and end of the game.

Frankly, it was pretty clear that Embiid either didn't give a shit or didn't have anything in the tank to offer on Monday, with lazy turnovers and half-hearted attempts to establish position showing up all over the tape. In the circumstances, a lack of interest or energy would be understandable on some level, with Embiid fresh off of 45 minutes in his return on Saturday and unlikely to be fired up for a meeting with the East's cellar-dweller. Rivers even warned the players of taking anybody lightly on their schedule prior to the game, cognizant of the double-overtime struggle they participated in just two days prior.

Still, this was a game reminiscent of the old Embiid, the guy who used to drift through chunks of the schedule depending on the respect he had for his opponent or the state of the roster at a given time. He has avoided these pitfalls over the last season-plus, and whatever the reason was, he regressed to that guy against Orlando, hoisting a ton of low-effort fadeaway jumpers.

They need the superior version of Embiid on this upcoming road trip, with two games against teams trailing them in the playoff race (Boston, Atlanta) and a pair against the Charlotte Hornets, current owners of a 13-10 record. The margin for error is gone after Embiid's lengthy layoff, and they need to start stringing wins together.

The unlikely duo of heroes

Strolling to the podium with a big smile on his face, Andre Drummond had a familiar piece of jewelry on his neck — the Sixers’ “big energy chain,” a reward for the effort he put in on the glass in the second half of the win. A first-time recipient of the award, Drummond recalled a former Public Enemy hype man in front of the mic.

Andre Drummond walks up to the podium wearing the Sixers’ Big Energy Chain.

It was the sort of lighthearted moment you expect after a big win over a crap team, but the Sixers really only snuck this one out as a result of the shooting efforts of Seth Curry and Drummond’s rebounding during a brief stretch in the second half.

Most of the credit belongs to Curry, who made nearly everything he put up against the Magic. While the rest of the team was doing their best to solve a basic 2-3 zone, Curry's biggest deterrent was simply getting the ball in the first place. As point guard Tyrese Maxey learns how to navigate the waters with Embiid and Harris both in the lineup, Curry is one of the players whose touches fluctuate depending on the game and situation, a fact he acknowledged on Monday.

"Me and Tyrese have been out there pretty much the majority of the games, so our roles kind of change a little bit as far as usage," Curry said. "We just got to adjust to having those guys back out there, and everybody's got to play their role."

True as that may be, what can't happen is a minimization of Curry on offense, where he offers all of his value to Philadelphia. Even on nights where Embiid can't buy a basket, the two-man weave with Curry is downright beautiful to watch at times, balletic in timing and precision.

Take this possession from the first quarter. After running an initial action with Embiid, both Orlando defenders converge on Curry, who throws a behind-the-back pass to Embiid to see how Orlando reacts. Embiid, waiting a beat after Wendell Carter Jr. flashes back to him, dupes the Magic with a fake handoff, hitting Curry for a smooth midrange make at the end of it all.

This sort of stuff is fun to watch even on a miserable night for the team. Getting to it is part of the battle, though. There are now pick-and-rolls with Maxey, isolation and mid-post possessions for Tobias Harris, post-ups for Embiid, and a number of other looks to consider for the Sixers. Whether some (or any) of those plays should take precedent over the Embiid-Curry partnership is another story, but if last year's playoffs were any indication, the Sixers will be relying on this in big moments again soon.

Then there was Drummond, whose eccentric style still managed to show up as he played his way into the good graces of his head coach late in the game.

"I thought Drum basically changed the game with his offensive rebounds and effort," Rivers said Monday.

Rivers is right about that, though true to form on an ugly night for the team, those offensive rebounds and his possession of the chain came bundled with some hilarious moments when he attempted to turn second chances into something more. Bless his heart for trying to hit a cutting Tobias Harris here, but Harris wouldn't have gotten to this ball even if he had Mo Bamba's wingspan.

Still, Drummond had four offensive rebounds in the final quarter alone, clearly finding a sweet spot inside Orlando's zone (and a sweet matchup vs. a skinnier Bamba) that he used to his advantage. He deserves to hold onto that gaudy piece of jewelry for the time being, though it should hopefully be the last time for a while the backup center is needed to set the tone for a game.