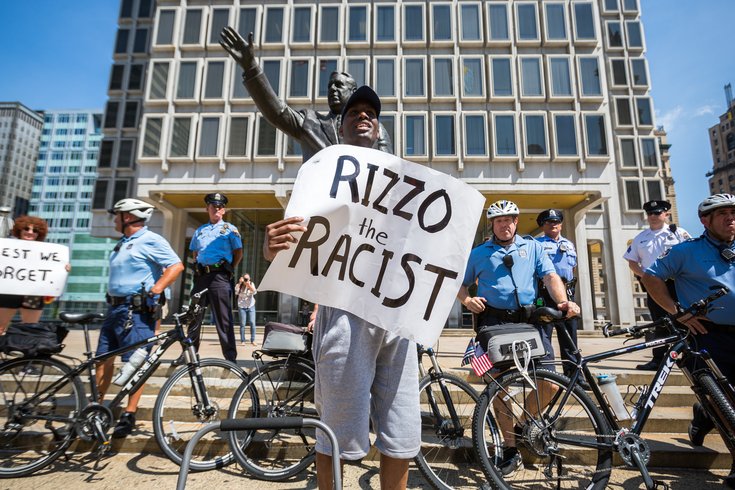 When you’re covering a story, you sometimes become – even tangentially – part of its narrative.

Such was the case for my iPhone at a sweltering Friday morning protest that saw a makeshift Ku Klux Klan hood temporarily placed over the head of the Frank Rizzo statue outside Philadelphia’s Municipal Services Building.

It sent live video from the scene out into the world (see often-profane footage here, here, here and here). It was watched by Rizzo grandson Joe Mastronardo.

Hearing words leveled at him personally, Mastronardo called me asking to speak with Asa Khalif, the Black Lives Matter Pennsylvania activist who led a small protest hatched during a 3 a.m. conversation with his grandmother.

Khalif, who said he was open to talking about relocation though he thinks the privately-funded statue “should go in the Schuylkill [River],” had already referenced Mastronardo during the spectacle, where protesters were outnumbered by reporters and police.

“I’ve heard Frank Rizzo’s grandson putting down some of our comrades in this movement. Maybe he can take it and drag it over to his yard. He can see his grandfather all day long,” he said. “But please bring it with the hood, so he can really know the legacy of his grandpop.”

Then, Khalif was more than happy to take Mastronardo up on the offer of a chat as he stood amid a circle of television cameras, radio-station microphones and reporters’ notebooks which captured one heated side of the 45-second confrontation.

“I’m sure he’s called me all sorts of names. I’m sure [n-----] was in his heart, just like it was in his grandfather’s." – Asa Khalif, Black Lives Matter Pennsylvania

Suffice it to say, it was an aggressive conversation on both ends.

According to both participants, it started with a Mastronardo question about whether Khalif has a job. The latter then broke down his beef with the Rizzo family and handed the phone back when he said what he’d wanted to say.

“It’s just a reminder of all the stories my grandparents, and my mother and father, told me that I never believed. Like, it couldn’t be this extreme, but that tone, the hateful spirit, that’s [still] in the Rizzo family,” Khalif said afterwards.

Asked if Mastronardo used the N-word, Khalif said, “I’m sure he’s called me all sorts of names. I’m sure [n-----] was in his heart, just like it was in his grandfather’s.

Asked whether he’d be willing to have a chat with Mastronardo, he noted that, “I don’t sit down with bullies or cowards who don’t come out and say it to my face, but rather do it over the phone. … I thought we were going to have a conversation, but if you want to threaten me, I’m still here. Come on down here. I welcome it. I’ll wait for you. I’ll wear your a-- out all over the city. Trust me.”

"Like I’m supposed to have a discussion with someone who just put a Klan hood on my grandfather’s statue? C’mon.” – Joe Mastronardo, grandson of late Philadelphia Mayor Frank Rizzo

For his part, Mastronardo said the statue should stay exactly where it is because Khalif's “not moving a Goddamn thing.” He also chose not to respond to the challenge to come to Center City since he can't teleport instantly from the suburbs.

“Me and my mom [Rizzo’s daughter Joanna] were watching the video and we were appalled. It was repulsive,” Mastronardo told PhillyVoice. “I don’t think he should be yelling swear words in public like that, but I’m sure he has a very limited vocabulary outside of what he’s heard in the rap music.”

Conceding that “everything went downhill” after he asked Khalif about his employment status, he said, “I’m not sure that a lot was heard on either side. It was a shouting match. I got nothing to say to that. Say what you want. Like I’m supposed to have a discussion with someone who just put a Klan hood on my grandfather’s statue? C’mon.”

So what we have now is Khalif, who made perfectly clear that he won’t rest until the statue disappears from its location (to the point of noting that he wouldn’t be averse to someone coming along and smashing it to bits) and Mastronardo, a vocal defender of his grandfather who's as equally unwilling to back down.

A battle that had just begun ratcheted up a few levels on Friday, so don't expect it to go away anytime soon.