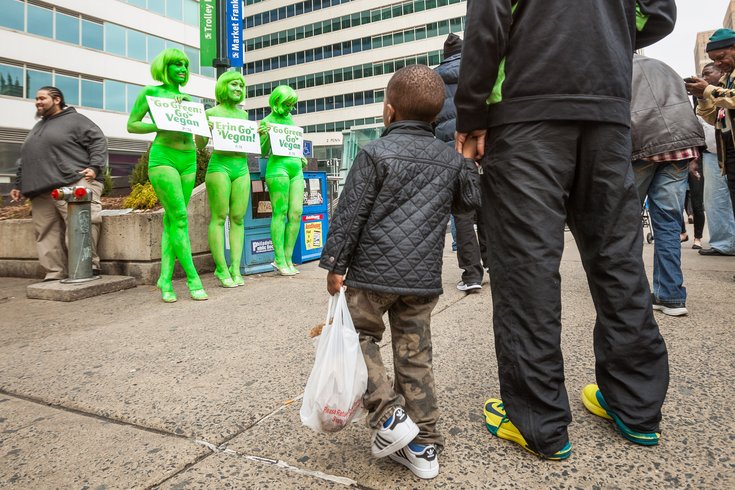 PETA's "Green Beauties" showed up at 15th and Market streets around noon on Wednesday to promote the organization's "Go Green: Go Vegan" campaign a day before many Irish-Americans will traditionally consume corned beef on St. Patrick's Day.

Avery Sanchez didn’t wake up in Wynnefield on Wednesday thinking he’d promise to swear off a meat-eating lifestyle in perpetuity, but that’s exactly (well, sorta) what ended up happening at 15th and Market streets.

The 26-year-old wanted to take a photo with three PETA members who stripped down to basically nothing but shamrock pasties and booty shorts, and applied green paint body to bare skin in a mission to urge passersby to “Go Green! Go Vegan!”

The painted Kelsey Brennaman from Kansas City, Missouri, made him a deal: “You got to be vegan forever; then, you can get a picture.”

Sanchez agreed, smilingly posed with the green trio and nodded when Brennaman said, “Congratulations on your new vegan journey.”

That journey wasn’t but 2-minutes old when I asked Sanchez – out of the trio’s earshot – whether he intended to live up to his end of the bargain. As expected, he was unsure whether he could.

Even if they’d been able to hear Sanchez’s instantaneous about-face, Brennaman and fellow green-activists Randi Fair and Sara Britt wouldn’t likely have regretted taking that one out of hundreds of photos in which they were captured from noon to 1 p.m.

After all, theirs was a mission of building awareness for a stance that eating meat has a negative impact on all facets of environmental health.

“This is the least I can do. The attention can be uncomfortable, but it’s not a huge sacrifice.” – Kelsey Brennaman, PETA

They distributed flyers to that effect to curious passersby who were jarred by the unusual sight in front of them. They also had leaflets with recipes for those interested in learning more about the issues that prompted this display of near-nudity at a public intersection crowded with lunch-goers.

PETA’s Ashley Byrne was not painted on Wednesday. She served as point person for the “Body-painted Beauties Say ‘Eat Green. Eat Vegan!’ for the St. Patrick’s Day” event.

“It’s a great way to get people’s attention and offer information. We’ve already handed out hundreds of our ‘Vegan Starter Kits’ and so many people have come up with questions about it, and eating healthier,” said Byrne, noting that the group would be in Chicago on Thursday with a similar mission. “St. Patrick’s is the ideal time to tell people the best way to ‘go green’ is to ‘go vegan.’

“Our volunteers are always happy to do eye-catching demonstrations that are fun, but have an important message to share.”

To be sure, there was a substantial amount of ogling and comment-fielding going on across the street from City Hall throughout the body-painted beauties’ time there. (One noteworthy exchange: Passerby: “Is that paint on your body?” Fair: “No, I’m naturally green.”)

So much so, in fact, that you had to wonder whether it made the models at all uncomfortable, even if the mid-60s temperature made for meteorological ease.

For Brennaman, this wasn’t a new experience. Though she admitted that she felt “like Kim Kardashian today with all the people taking pictures,” she first replaced clothing with paint in Denver, Colorado, four years ago.

On that day, she painted herself red and sat in a “shoebox” as part of an anti-leather demonstration. The inspiration for that came from a friend “who did everything he could for animals.” Though she’s worked with domestic-abuse victims, homeless people, children in need and other humans, she felt that “what animals have to go through” is worse.

So, she’s done several body-painting awareness/protest events in the years since.

“This is the least I can do,” she said. “The attention can be uncomfortable, but it’s not a huge sacrifice.”