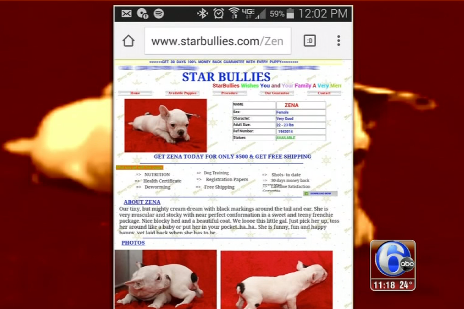 A screenshot of the Starbullies.com website, via the 6 ABC story.

Nydia Han of 6 ABC published a report Friday on several websites that have been scamming people with fake puppy sales.

The story explains what happened to Marcie Daniels from West Deptford, New Jersey, who paid $550 dollars for a French Bulldog puppy from the website Starbullies.

Daniels, who said she has made similar transactions in the past, was subsequently asked to wire an additional $1,700 to a separate website called Petcoshipping.com for 'puppy insurance.' When she tried to contact the seller, she couldn't get a hold of anyone and the puppy never arrived.

A similar incident happened to Robert Sonny Gotz of New York, who bought a puppy through the website GoldenBullies.com. When his dog never arrived, Action News went to the breeder's house listed on the website.

But the house at the listed address was different than the one pictured on the website, and the woman living there does not sell dogs but has had several prospective buyers arrive at her doorstep because of the bogus website.

The story warns that these websites often change URLs frequently to keep the scam going, and are often riddled with spelling and grammatical errors.