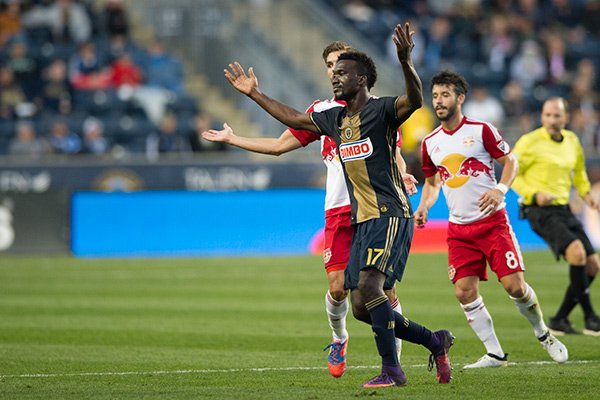 C.J. Sapong returned from a concussion to play 14 minutes in the Union's 2-0 loss to New York on Sunday evening.

With a 2-0 loss on fan appreciation night, the Philadelphia Union finished the 2016 season with 14 losses, a negative goal differential, and a seven-game winless streak.

They also qualified for the playoffs for the first time in five years, ending the longest postseason drought in Major League Soccer.

That juxtaposition of achievement and failure made for a strange atmosphere at Talen Energy Stadium on Sunday evening, with a smattering of boos to greet the final whistle.

Such is life in MLS, where 12 out of 20 teams get a shot at the postseason, which makes you wonder why we even play an eight-month regular season to begin with. In any other sport, the Union would have bombed out spectacularly with the form they've displayed in the past two months.

"It starts with me," head coach Jim Curtin said post game. "We've had a difficult end to the season. We're not happy about it, and again, I look in the mirror at myself, and things I can do better to get this thing turned around. Having said that, I do want to congratulate the players. While it has a strange feeling because we're in a bit of a dip in form, the accomplishment they made this year to get into the playoffs now, to have a ticket to lift an MLS Cup, to have that opportunity, is something that this club hasn't had for five years. It's a big accomplishment."

There were two different instances of booing on Sunday night, one at the final whistle and one when Curtin took the microphone at midfield to address the fans after the last home game, which is a Union tradition.

In fairness, the first round of booing was rather light, though certainly audible. The second round included the section of Red Bull fans who stuck around to cheer their team after the 2-0 win. Their booing of the opposition manager made it hard to tell how many Union fans were also involved.

"It's strange, of course," Curtin said. "Listen, it's Philadelphia first and foremost, so booing is popular. It's commonplace. It's normal when you don't win. They're entitled to boo. It is difficult for me because I feel bad for the players, the guys who put in such a good year, and the timing – it's the timing of it, right? Again, if we started horribly, and we're terrible, and we get booed early and finish strong, and we scrape in at the end, then I think it's a total shift in mindset, and everyone is going nuts (on Sunday). But it is what it is, we can't change it. It's the past now, and we have a ticket to the real season, as I call it."

Btw, Keegan Rosenberry set an unbreakable record today, played every single minute of every single game as a rookie

The Union will play Toronto FC, who were held in third place by virtue of New York City's win against Columbus.

It makes for a curious Wednesday night matchup between perennial underachievers, a pair of clubs that have experienced just 270 minutes of playoff soccer in 15 years of combined existence.

With high expectations entering 2016, Toronto certainly has more to play for. They're at home, in their recently renovated stadium, playing in front of a crowd that has watched a lot of ghastly soccer over the years. Last year's postseason entry was one for the history books and not much else, with Greg Vanney's club flaming out as 3-0 losers in Montreal.

Philadelphia didn't have much success in its only playoff series, with Peter Nowak inexplicably changing his formation in the first leg loss to Houston back in 2011. The second leg was equally impotent and Philly was easily dispatched by the eventual eastern conference champions.

"I think, personally, we can go negative with this or we can go positive," said goalkeeper Andre Blake. "We just have to remember that we're the same team that did what we did (at the start of the year), and that's the reason why we were able to make the playoffs. It's just unfortunate that we're hitting a tough spot right now. But as long as all of the guys continue to believe that we can play on any given day when we go out and do the work, then we can play against any team. I think we can still go into the playoffs and make a run."

There's a Grateful Dead song that features this verse:

"Sometimes the light's all shinin' on me
Other times I can barely see
Lately it occurs to me what a long, strange trip it's been"

It's the final line that sums up the last five years of Philadelphia soccer.

The success of 2011 quickly gave way to mediocrity on the field and apathy off of it. Season ticket holders abandoned the sinking ship while the team lost two cup finals on home turf. The Union half-heartedly went through the regular season motions with a meddling front office and an ownership group that needed time to construct training fields and a proper facility.

It took the club six years to build the infrastructure required to compete with 19 other MLS teams.

Some smart hirings and some smart firings provided a renewed interest in this campaign, and the club really did punch above its weight in the spring. Chris Pontius regained his all-star form, Andre Blake became an all-star, and three rookies made significant contributions to the team. Even with a long-term injury to Maurice Edu, and the midseason departure of Vince Nogueira, the Union did enough down the stretch to stay in playoff position, even though sixth place in a ten-team conference isn't much to celebrate.

But Major League Soccer makes up the rules, and you can only play the schedule that you're given.

In this case, there's nothing to lose for the Union, who probably should not be here. Expectations for 2016 were not high, and a playoff berth was generally regarded as the bare minimum for "success," if you crowd source the community of Union fans, media, players, and coaches.

So here we are, in late October, with a sub-.500 team entering the postseason for the first time in a half-decade.

It's okay to be upset and optimistic at the same time. Maybe the Union get smoked on Wednesday night, or maybe they pull off the unthinkable.