Pick your poison: A look at the Union's possible playoff opponents 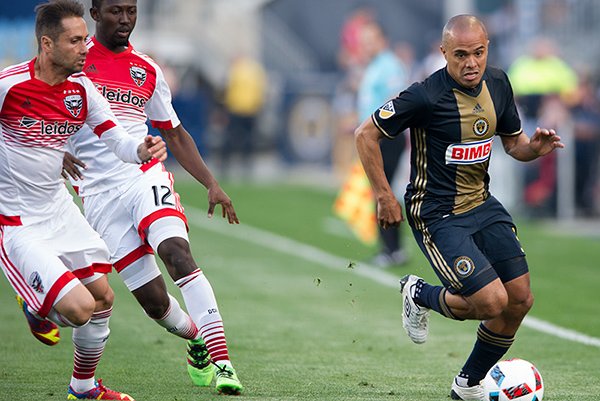 Red-hot D.C. United is one of three possible postseason opponents for the Philadelphia Union.

With the way the Philadelphia Union are playing, there really aren't any favorable playoff matchups.

But let's not forget what happened last year.

The Portland Timbers, sliding into the postseason as the third seed in the West, put together a six-game unbeaten streak to claim the MLS Cup.

And don't forget the 2010 NHL Playoffs, when the seven seed Philadelphia Flyers advanced all the way to the Stanley Cup finals. Peter Laviolette's team only qualified for the postseason with a rare shoot-out win on the final day of the regular season.

Anything can happen, even for a Union team that hasn't won since August 27th.

Philly only played Toronto twice this season, and both games had their various quirks. The 3-1 home loss was highlighted by a rough individual performance from Ken Tribbett, who had trouble with Sebastian Giovinco and Jozy Altidore. The Union midfield didn't help, providing little pressure on their TFC counterparts, who had time to to pick apart the backline.

The 1-1 road draw as actually a very good result for Philly, who had to start Tribbett again due to a concussion and red card suspension for Josh Yaro. Tribbett played a much better game on the road, with Altidore starting but Giovinco absent through injury. The Union were class for the first 60 minutes, then ran out of steam in the second half. Both teams settled for a point.

I don't think another road trip to Ontario suits Philly, especially with a healthy Giovinco back in the fold.

The biggest positive is that Toronto actually hasn't won at home since August 6th. They've had two losses and three draws at BMO Field since then, including a 3-3 result with Red Bull and a scoreless draw against Orlando.

The last Toronto win was on September 10th, though Greg Vanney's team finishes with Chicago at home.

The Union were 90 seconds from sweeping D.C. United, but conceded a late equalizer in the 2-2 draw at RFK Stadium back on August 6th.

Since then, D.C. Has six wins, one loss, and four draws. They are currently on a four-game winning streak and are the hottest team in MLS over the past six weeks.

There really are two different ways to look at this possible matchup.

One, can you really be afraid of a team that you beat twice this season?

Or, two, do you want to avoid a team that is in outstanding form right now?

It really has to be noted that D.C. was a much different team in the first two games, both of which were played at Talen Energy Stadium.

The May 20th game was destined for a 0-0 result until Richie Marquez found himself a stoppage time equalizer. D.C. was 3-4-4 coming into the game and started Alvaro Saborio alongside Lamar Neagle in a traditional 4-4-2. Ben Olsen was still experimenting with Nick Deleon in a central midfield role.

July 9th was a much more lopsided result, with Kofi Opare conceding an early penalty, then picking up his second yellow card in the 65th minute. Olsen benched Bobby Boswell and inexplicably tried Alhaji Kamara as his lone striker. The Union won 3-0.

NYC might be the most favorable matchup for the Union.

The teams only met twice in 2016, with Philly winning comfortably at home, then stumbling to a 3-2 loss at Yankee Stadium, a loss that really started the post-Copa America skid.

Andrea Pirlo and Frank Lampard did not play in the 2-0 loss to Philly on April 23rd. Kwadwo Poku was in the starting lineup and Andoni Iraola was still at right back. Jason Hernandez paired Frederic Brillant at center back.

Manager Patrick Vieira thought his team was the better side, despite being objectively outplayed for the majority of the game.

It was different, then, on June 18th, when NYC ended the Union's franchise-record eight-game unbeaten streak.

All three designated players scored for City, who took a 3-0 lead into halftime. The Union pulled one back through Roland Alberg in the 55th minute, then added a second in the 88th minute after a Brillant red card, but there just wasn't enough time to find the equalizer.

NYC has three wins, two losses, and one draw through September and October. David Villa is, of course, playing well and Lampard will likely return from injury this Sunday.

I still think the City defense is a problem, and I could see the Union scoring a goal or two on the road. NYC has a lot of star power, but Philly might be able to junk it up on a small field in a one-game wild card scenario.

The most important thing for me is to rest the starters this Sunday, though I don't think Jim Curtin will go that route. You might see a few changes here and there, but I really think it's smart to have your team as fresh as possible for a midweek road game. You're looking at only 72 or 96 hours of rest if you play the starters on Sunday.

Here's what you said about the possible matchups:

Alright, let's do the poll - preferred first round opponent for the Union?