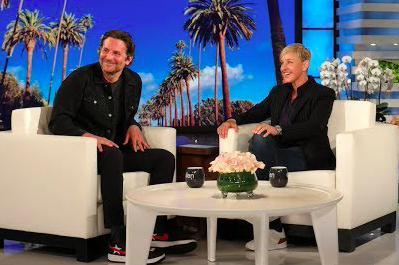 Bradley Cooper joins Ellen DeGeneres to talk about "A Star is Born," being a parent and even a little bit of HBO hit "Game of Thrones."

The Oscar limelight of "A Star is Born" has subsided a bit since the Academy Awards, but Bradley Cooper is still relishing the success of his directorial debut.

The Jenkintown native joined Ellen DeGeneres on Thursday for the first time since the movie began filming, discussing a range of topics from from fatherhood to a "Game of Thrones" theory and the possibility of going on tour with Lady Gaga.

On the latter point, Cooper flatly rejected the idea of ever launching a tour behind the Grammy-winning soundtrack of "A Star is Born." He did offer another suggestion, though.

"You know what I thought would be a cool thing to do, maybe one night?" Cooper said. "Maybe do a live reading of the movie, of the script, and sing all the songs as you're reading the script, like at the Hollywood Bowl."

Cooper also was asked about how fatherhood has changed him – he has a 2-year-old daughter Lea with supermodel girlfriend Irina Shayk. Cooper said it's impacted him in every possible way.

"It allowed me to embrace my childlike self without any sort of fear of judgment," Cooper said. "You know what I mean? I can just play with toys all day long and not feel like, maybe, is this weird? Or watch cartoons endlessly and not think I'm wasting my life."

Finally, Cooper joined DeGeneres for a game of "5 Second Rule," in which the two were given five seconds to respond to spontaneous prompts. Cooper was asked to name three shows he watches while he's home by himself. Stumped, he said "Game of Thrones" three times in a row. To save face, he offered a fan theory for the show's final season.

"How about this?" Cooper said. "Arya can be a White Walker. That's my thought for the next episode. Think about it. She can take the thing of a White Walker. Right? Might be a way in."