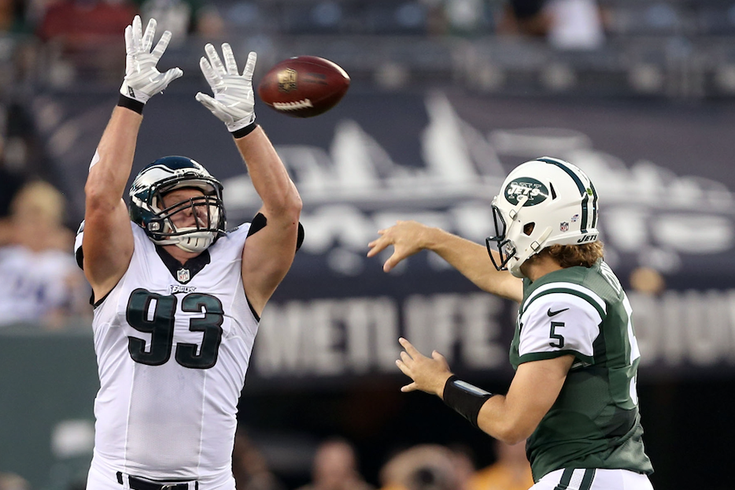 Former Eagles' defensive end Brandon Bair rescued a man from a burning semi-truck after it was struck by a train Thursday evening in St. Anthony, Idaho.

The 36-year-old was driving to work at around 5:45 p.m. when he saw the locomotive hit the truck on the passenger side, Bair said to East Idaho News.

"There was an explosion right away, and the train was pushing the truck down the tracks," Bair said. "I got on the phone with 911 and started driving down the median to get to the front of the train when it stopped.”

Bair then ran across the highway to the truck, where he found the driver pinned inside and unable to move as smoke and flames engulfed the vehicle.

“It was a conscious decision that I’m going in because he needs help right now,” Bair said. “I ran up to the window and saw dripping hot flames all over the inside of the truck. I could see a guy in a seatbelt and was able to reach in and get it off of him. He was talking, and I told him we had to get out of here now.”

Seconds later, the truck's roof collapsed and the entire vehicle went up in flames, Bair said. A couple of explosions followed minutes later.

Bair stayed with the man until emergency responders arrived at the crash scene and took the driver to a nearby hospital. The man, identified as 25-year-old Steven Jenson, was listed in fair condition as of Friday morning.

“All I can say is this guy was supposed to live," Bair said. "I’m a man of faith, and I’ve learned to listen to your gut and the promptings you get. The Lord wanted him alive. Things could have gone different a million different directions, but things worked out on his behalf. That’s my conclusion. Whether it was me or someone else, he was supposed to live.”

Bair had a few scratches, but no burns. After speaking with police about what happened, Bair drove home and called his wife.

“I was able to hold it together and be tough, but then I got a little shaky when I heard her voice,” Bair said. “Being able to go home and put my arms around my kids – it hit me. You never know what’s going to happen in life, and this shows you should hug your family every chance you get.”

A native of Idaho, Bair played in Philadelphia from 2013-2015 during all three seasons when Chip Kelly was the head coach of the team. He appeared in 21 games for the Eagles and made two starts. Bair racked up 28 total tackles, 1.5 sacks and four pass deflections during his three-year run in Philly.

Bair played at the University of Oregon under Kelly and went undrafted. He was a member of the Chiefs and Raiders before landing in Philly. Bair retired from football after the 2015 season.

Bair now lives in St. Anthony with his wife and four daughters. He helps run a home manufacturing business.