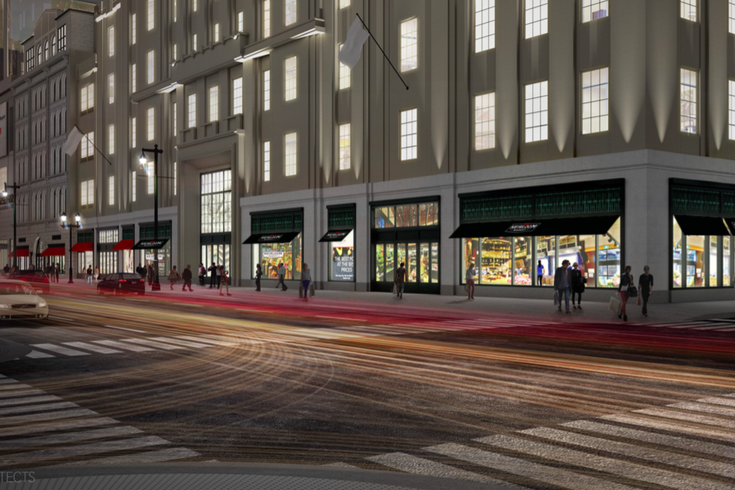 Giant's fourth Heirloom Market is planned for 801 Market St. in Center City. The company also has plans for several new supermarkets around Philadelphia over the next few years.

The Giant Company's widening footprint in Philadelphia will grow later this year with the opening of the grocer's fourth Heirloom Market store, this one at the former Strawbridge's department store building, the company confirmed Friday.

A Giant spokesperson also confirmed the locations of three more supermarkets it plans to open elsewhere in Philadelphia.

The 32,000-square-foot Heirloom Market will open at 801 Market St. in the Fashion District before the end of the year.

Giant opened its first Heirloom Market, a small format grocery store with strong local vendor partnerships, in Graduate Hospital at the start of 2019. The company has since opened Heirloom Markets in Northern Liberties and University City.

The Carlisle, Pennsylvania-based company — a subsidiary of Netherlands-based Ahold Delhaize — has made an aggressive push to cement itself as a supermarket of choice in Philadelphia. In March, the company opened a flagship, two-level supermarket in Logan Square.

On Friday, a company spokesperson confirmed three other planned locations that have long been rumored as part of other development projects.

A 46,000-square-foot store is planned for the corner of South Columbus Boulevard and Reed Street, where National Realty Investment Advisors has planned a massive residential complex with 855 apartments.

And at the corner of North Broad and Spring Garden streets, Giant will open a 50,000 square-foot-store in conjunction with developer EBRM's plans to build two apartment towers.

All three projects are expected to be completed by the end of 2023.

Giant plans to unveil store amenities and anticipated timelines for the new stores at a later date.