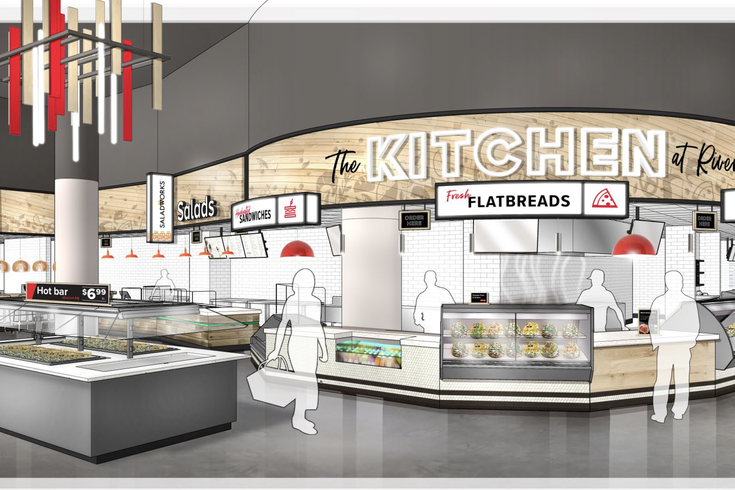 The store opened its doors Friday, making it one of the largest supermarkets in Center City. Mayor Jim Kenney, the Philly Phanatic and city officials attended the ribbon cutting ceremony, according to Supermarket News.

The 65,000-square-foot store takes up the first two floors of the Riverwalk apartment building on the corner of 23rd and Arch Streets.

This marks the latest addition to the Riverwalk project, a mixed-use development along the Schuylkill River. It is the fifth Giant location in the Philadelphia area.

“This is a very big day for our company, but it’s also a very big day for Philadelphia — a city that we love, and a city where we’ve made a commitment to bring a positive impact in the way that we do business, the way that we employ and the way that we give back. We’re trying to make a difference here because we believe in the future and the potential of this great city,” Giant President Nicholas Bertram said in a press conference at the store’s grand opening on Friday. “We don’t take that responsibility lightly, and we don’t come to it without anything other than great ideas and innovation.”

There will also be a beer garden featuring 40 craft beer, wines, hard seltzers, cider and kombucha on tap. It features Giant's largest plant-based prepared food section with impossible and beyond products, vegan cheese, ice cream and desserts. The store has an outdoor dining area

Customers can access the second floor from the escalator, elevator or from the two story parking garage. There's a "cartalator" inside as well that moves shopping cars between the levels of the store.

Construction on the store started in 2019 and more than 200 employees were hired to work at the store. The store is not as big as the Giant on Grant Avenue near the Northeast Philadelphia Airport, Billy Penn reported. It's larger than the Whole Foods located behind the Art Museum and the ShopRite at Waltman Plaza.