Cat, now about 11 weeks old, was rescued by DRPA officer and has since found an adoptive home in Camden County 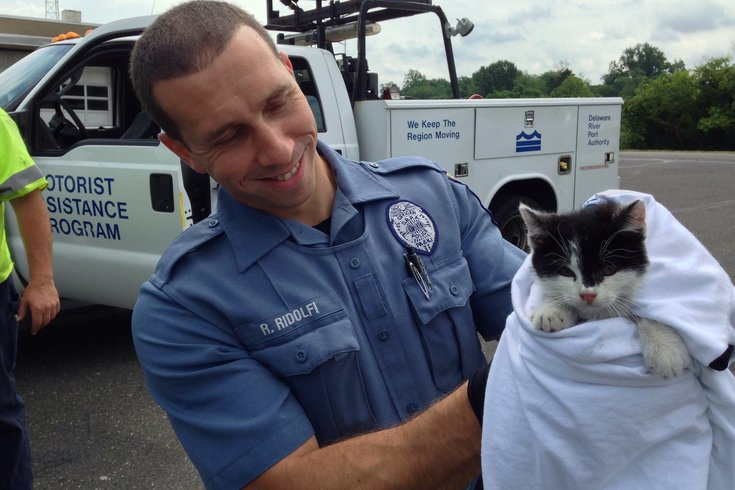 Delaware River Port Authority Patrolman Richard Ridolfi saved a kitten tossed from a car into traffic on the Walt Whitman Bridge. The kitten, which has been named Bridgette, has since been adopted. Ridolfi, shown above holding Bridgette, is an animal lover who carries cat and dog food in his lunch pail while on duty, "just in case."

If cats really do have nine lives, the kitten tossed from a moving car onto the traffic-choked deck of the Walt Whitman Bridge burned through a bunch all in one day last month.

But there’s a happy ending for the cat that was 7 weeks old at the time and now is known as Bridgette, the miracle kitten.

A horrified good Samaritan saw the small black-and-white kitten get thrown from the moving vehicle into the eastbound lanes of the bridge on June 24. 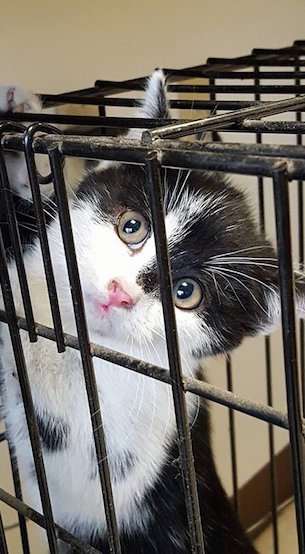 Delaware River Port Authority Patrolman Richard Ridolfi saved this kitten that had been tossed from a car onto the deck of the Walt Whitman Bridge. The kitten, since named Bridgette, has been adopted by a family.

She immediately called 911 at about 10:30 a.m. to report the incident, but she had no description of the vehicle or the despicable driver.

The DRPA dispatched Patrolman Richie Ridolfi, 33, an animal lover who carries cat and dog food in his lunchpail while on duty, "just in case."

Ridolfi sped across the bridge in the westbound lanes to respond.

As he approached, the patrolman was amazed to see that another motorist had stopped her car on the eastbound side to prevent the feline in front of her vehicle from being hit.

Ridolfi stopped his police cruiser in a westbound lane, vaulted the concrete divider wall and, dodging traffic, ran toward the stopped car.

Another DRPA patrol car pulled up behind the stopped car to protect it, its driver and the kitten from approaching traffic. Then Bridgette disappeared from sight.

Ridolfi assumed at first the animal had bolted and been run over.

Then he realized she’d jumped up into the wheel well of the stopped car.

“It was nerve-wracking,” said Ridolfi, who had dealt with strays before, but never on the deck of a bridge in the middle of traffic.

He took his gun belt off, shimmied out of his protective vest and wiggled his way under the car.

As he reached for Bridgette, she decided to crawl further away, into the undercarriage of the car, totally out of sight and inaccessible.

Unable to reach the cat, the DRPA cruiser got up right behind the stopped civilian vehicle and gently nudged it toward the outside lane, which police had shut down for safety. 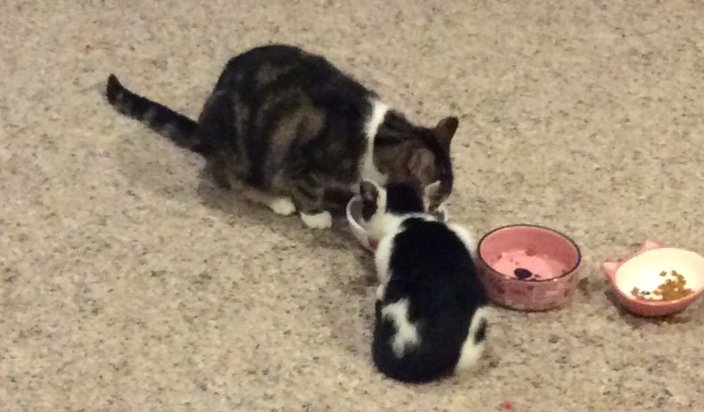 Bridgette, the cat rescued from the Walt Whitman Bridge, remains skittish, her new owner Brian McGlinchey says, but she's growing more confident. Bridgette was rescued by Delaware River Port Authority Patrolman Richie Ridolfi after the cat was tossed from a moving car into traffic. Bridgette, the smaller cat near the bottom of the photo, is seen here sharing food with McGlinchey's other cat, Roxy.

An emergency truck arrived. It seemed the only solution was to load up the car containing the kitten, tow it off and then find the scared animal.

That’s when Bridgette (who would have been named Walt had she been a boy) moved back down again into the wheel well.

Ridolfi, wearing gloves and using a borrowed T-shirt, snatched up the cowering kitten, swaddling her in the shirt until someone brought him a box.

He drove the kitten back to DRPA headquarters, where there is a cage used to temporarily hold stray animals.

When his shift ended, Bridgette was taken to a vet, checked for diseases and had her fleas removed. Ridolfi paid the $130 medical charge out of his own pocket.

The officer posted a photo of the cat on Facebook shortly after the rescue mission, and he said he was contacted by Brian McGlinchey right away, who said he was interested in adopting her.

McGlinchey knew Bridgette’s backstory firsthand: He’d seen the commotion on the Walt Whitman during his drive from Runnemede, Camden County, to his job at Pennsylvania Hospital in Center City.

McGlinchey picked up Bridgette when his shift ended.

She’s slowly adapting to a quiet home life shared with another cat named Roxy, a dog and McGlinchey’s two daughters.

“She tends to hide a lot. She’s skittish still,” he said.

“Who knows what happened to her before the bridge? But slowly and surely, she comes out more and more," said McGlinchey, pleased to have provided Bridgette, the miracle kitten of the Walt Whitman Bridge, with a storybook happy ending.