But check out the stop Aaron Nola made as catcher 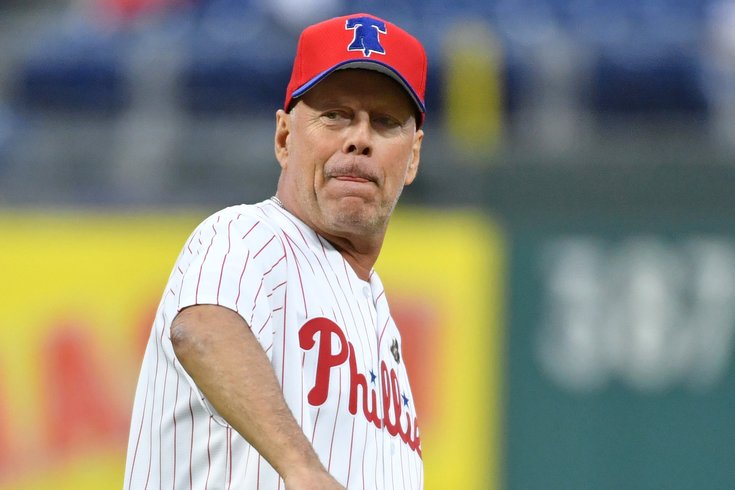 Actor Bruce Willis, originally from Carney's Point, Salem County, throws out the first pitch before game between the Philadelphia Phillies and Milwaukee Brewers on Wednesday, May 15. Willis' pitch bounced before home plate.

Bruce Willis threw the ceremonial first pitch at the Phillies game against the Milwaukee Brewers on Wednesday night ... and, uh, we've seen better.

The actor and South Jersey native, known for "Die Hard" and "Pulp Fiction," wore a No. 19 Phillies jersey for the appearance. A few hours earlier, the left took some swings at batting practice using outfielder's Nick Williams bat. Then he stepped onto the mound, or rather, a few feet in front of it.

When it came time to throw the pitch, Willis' mechanics actually weren't terrible. He led with with his right shoulder, extended his left arm backwards, but some where as his hand accelerated forward with the baseball perhaps he got nervous he'd launch it over the head of Phillies starting pitcher Aaron Nola, who served as catcher.

That hesitation caused the exact opposite to happen, and the ball bounced a few feet in front of home plate. Nola did make a nice stop, though.

The Philly faithful gave him a "warm" reception. pic.twitter.com/EQlBAglbIi

Let's see that again from the home plate.

Bounced it up there 🤦🏼‍♂️
Few boos 😂#Phillies pic.twitter.com/uu1VD8I1qE

The crowd sent mixed signals with polite cheering that ultimately was overpowered by the sounds of booing coming from the stands. Even the "Die Hard" theme song was muddled by the crowd's disappointment.

He seemed to take it all in stride, however, and considering Willis grew up a Phillies fan in Carneys Point, Salem County, maybe he's just thick-skinned enough to not care.

Though the actor's wife, Emma Heming Willis, claimed in a tweet that the crowd was actually saying "Bruuuuce" and not booing the actor.

Thank you Kevin. Happy someone cleared that up. https://t.co/Q9YIBSQdCh

But look, whether it was boos or "Bruuuce," I think we can all agree that it wasn't the worst first pitch in history, and really, at the end of the day, maybe he's just always seen himself as a hitter.

Bruce Willis couple of nice swings in the batting cage. He grew up in South Jersey, and loves baseball#Phillies pic.twitter.com/YowLsX5enN