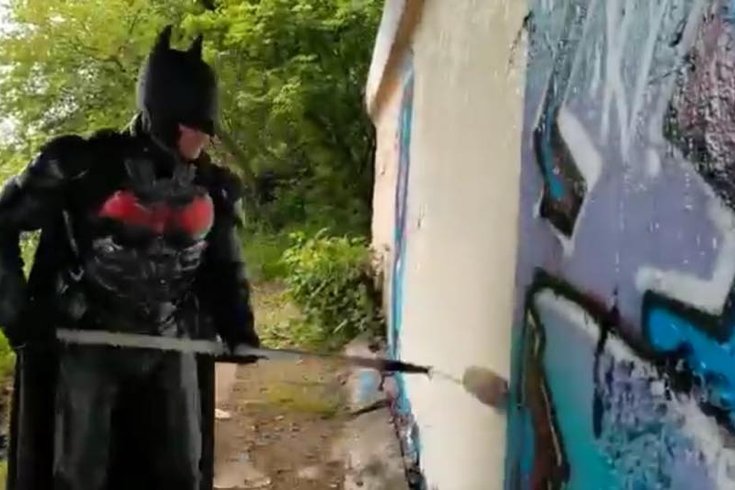 He's the hero Bensalem deserves, and the one that it needs right now.

At least, that's according to the folks over at Ed's Bait and Tackle Shop on Haunted Lane. The shop took to Facebook on Monday to thank someone dressed as the caped crusader for cleaning up graffiti under the Bristol Pike bridge on the other side of the Neshaminy Creek in Croydon.

"We understand that the wall will probably be tagged over again but it is good deeds like this that makes (sic) our community great to live in," the post said.

The post added that it seems the most popular option to deal with graffiti under the bridge is to get a local artist to paint a mural.

"Bucks County Batman" started a YouTube page a month ago, but only in the last couple of weeks has he been posting videos of himself in the quite authentic-looking costume.

His other videos include karate chopping a watermelon and riding a motorcycle as Batman. His latest — and most popular — video shows him taking a roller over the graffiti.

Bucks County Batman, who still hasn't released his identity, told FOX29 that he grew up in Croydon and moved to Bensalem. He said he knows how the graffiti bothers the owner of the shop, Ed Brodecki, so he decided to help out.

It remains to be seen if a mural will go up in the graffiti's place. Maybe the Bat-Signal would work?