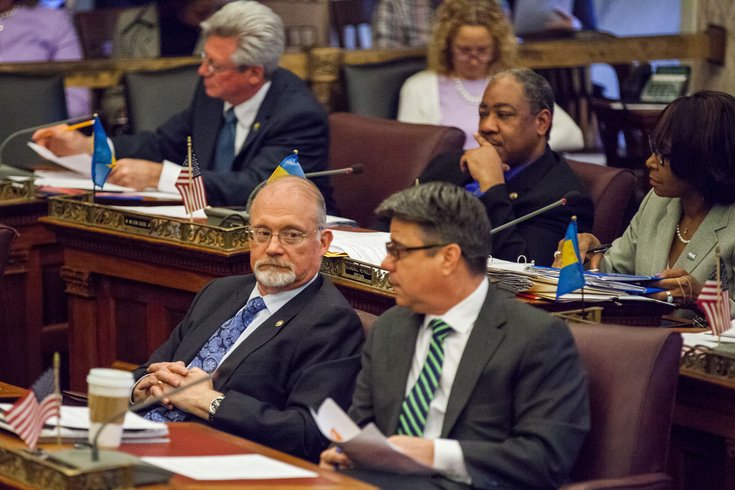 City Councilman Wilson Goode Jr. didn’t get very far back in 2010 when he introduced a bill to put a 12-year limit on consecutive terms for City Council.

“The bill had only one co-sponsor, which was (former Councilman) Bill Green, it met with resistance, and I did not proceed with a hearing,” Goode told me.
But that doesn’t mean it wasn’t a good idea.
Now here we are in 2015, with Philly’s newest PAC, Philly 3.0, putting big bucks behind the issue. For the past week, the group has been running two television ads in favor of terms limits.

The political action committee says a lack of healthy political competition for City Council has produced a legislative body stacked with longtime members who feel they have a job for life and no incentive to tackle difficult problems. The PAC points to Council’s recent decision to scrap the proposed sale of PGW without holding hearings as a perfect example of the problem.
“Putting aside the question of whether this specific sale was the right sale, at a minimum, there should have been a public hearing and debate about it,” said Alison Perelman, executive director of Philly 3.0. “It was a huge piece of legislation, a matter of tremendous importance to the city, and it didn’t even get a hearing. That’s the very definition of a political climate where tough issues won’t be discussed and tough votes can’t be taken.”
She has a point. Seven of the nine incumbents running for 10 district council seats aren’t facing any challenge at all, not even a nominal Republican bid in November. Longtime incumbent Marian Tasco is resigning, but her friend and political ally, State Rep. Cherelle Parker, is running for the seat against no primary opposition.
That leaves only two competitive races: incumbent Maria Quinones-Sanchez versus the party-backed Manny Morales, and the dogfight between incumbent Kenyatta Johnson and Ori Feibush, a largely self-financed developer from Point Breeze.

TERM LIMITS, OR A BETTER WAY

For most longtime Philadelphians, of course, this is just the normal way of things. In the last 40 years, 49 people have served on the 17-member City Council and gone through nine elections. Since 1979, five members stayed in office until they died, six had to leave office because they were arrested, four resigned in order to take the lucrative retirement package known as DROP and seven resigned to run for another public office. Only 20 actually lost their seat in a contested election.
Some people think this is a good thing. They reason that time gives council members experience and makes them better at what they do. Blondell Reynolds Brown, for instance – an at-large city councilwoman who has faced and paid for a series of ethics violations and is now running for a fifth consecutive term said, “We already have term limits. They’re called elections. If I’m doing good work and delivering legislation that makes a difference in people's lives, you better have a doggone good reason why I should not be re-elected.”
Others agree that Council needs more competition but think term limits aren’t the best way to get it.

David Thornburgh, CEO at the government watchdog group Committee of Seventy, told me he’d prefer to see the city move toward open primaries – which means that all voters would be able to vote in a Democratic primary, whether or not they’re registered Democrats. 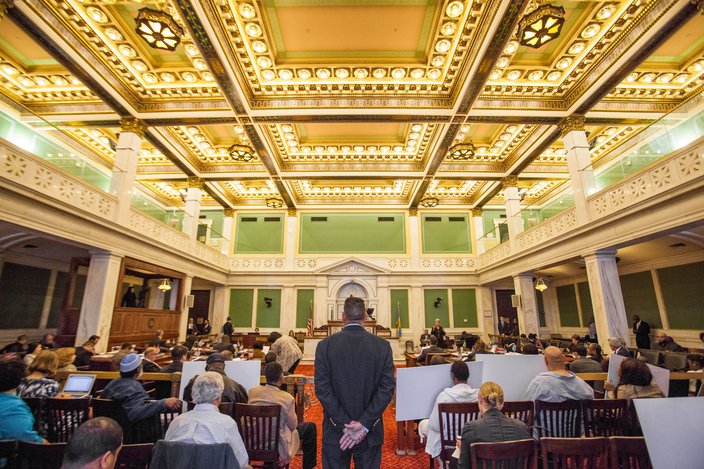 Philadelphia City Council meets last Thursday in chambers at City Hall. Enacting term limits would require a change to the city charter, which requires the approval of at least 12 sitting council members  and a majority of voters. (Thom Carroll / PhillyVoice)
Susan Carroll, who studies the issue at the Eagleton Institute of Politics at Rutgers University, said she worries about losing expertise.
“Term limits can force open a closed club of established power brokers and bring in new ideas, but the problem is that you also lose people who’ve gained a lot of experience,” she said.
Even Goode now says he thinks term limits have a mixed record.

"Given the fact that you’re much more likely to see a council member die in office or go to jail than you are to see them lose an election, it’s pretty clear that Philadelphia has proven unable to infuse our Legislature with new blood." – Brett Mandel, political activist

“In New York, for example, term limits really enabled them to bring in new blood and build a progressive bloc,” he said. “In other places, people who thought they were building progressive blocs wound up getting term-limited out. And, in several places, such as California, there were limits on both the local and state level, so you wound up with people simply switching seats.”
But according to Perelman, these people represent a distinct minority in Philadelphia. She said her group conducted a poll last fall that showed citywide support for term limits to be 73 percent.

Whether or not you believe that number, I didn’t have to look very hard to find people who love the idea.
“That’s the problem with a one-party town,” said political analyst Larry Ceisler. “It’s just so difficult to run against an incumbent, especially for a district seat. And people do become stale. So you’ve got to put the brakes on things somewhere.”
Political activist and civic reformer Brett Mandel put it this way: “It’s not that term limits are in and of themselves a great thing. But given the fact that you’re much more likely to see a council member die in office or go to jail than you are to see them lose an election, it’s pretty clear that Philadelphia has proven unable to infuse our Legislature with new blood.”
As opposed to the district seats, there is more competition for the seven at-large Council seats, where candidates compete to become one of five names nominated by each party. The chosen 10 then face off for the seven available spots, guaranteeing at least two Republican council members in this heavily Democratic City. And we’re seeing several new faces vying for those seats this year.
But still, it’s difficult to win without the backing of Philadelphia’s party machine, which decides whether your name gets on the coveted lists of “recommended” candidates that get handed out at polling places on Election Day.
So the end result is that in the past nine election cycles, which included a total of 153 Council seats on the ballot, only five were actually open seats.
When you really think about it, this seems crazy. Despite recent population gains and some economic momentum in Center City, Philadelphia is facing big problems that could sink our city: failed public schools, crippling pension debt, a self-defeating tax structure and an ever-shrinking base of well-paying jobs. So far, this long-serving City Council hasn’t done much to fix them.
Why aren’t more people trying to take their jobs?
“Actually, it doesn’t surprise me at all, and I’m betting that your incumbents win over and over again, with no challengers and very low voter turnout,” said Nick Tomboulides, spokesman for U.S. Term Limits.org, a group that advocates for term limits nationwide. “Who wants to jump in and challenge someone who’s backed by a massive machine, with all kinds of special-interest money, and expose themselves to political retribution when they lose? That’s why most smart challengers wait for open seats.”
If enacted, term limits would put Philadelphia in good company. Of the nation’s 10 largest cities, only one, Chicago, has no term limits at all. Philadelphia is the only large city that limits the mayor’s term and not City Council’s.
But it wouldn’t be easy. It would require a charter change, which means a yes vote from at least 12 sitting council members as well as the approval of a majority of voters.
Still, Perelman feels like they’re getting somewhere. For proof, she pointed to the Philadelphia Inquirer’s recent endorsement of four challengers in City Council races.
“We checked – the last time they endorsed so many new faces was back in 1991. So it’s not like this is a paper that has a habit of embracing newcomers,” she said. “For me, that’s the best example of why we feel our message is the right one for right now, and that it’s registering with voters.”