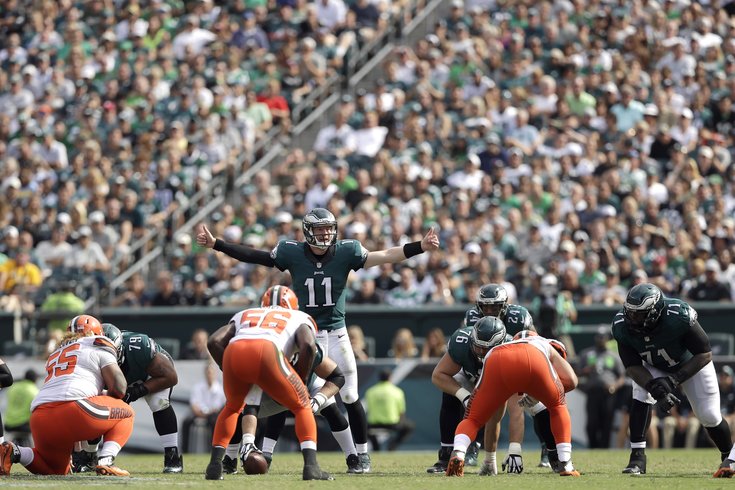 As any football novice could easily surmise Sunday afternoon, Philadelphia Eagles rookie quarterback Carson Wentz was really good in his professional debut, poor opponent or not.

Let's take a look back at all of Wentz's notable moments in the game:

• On the Eagles' first two plays, they ran the ball, getting 7 yards. On third down, lined up in the shotgun, Wentz barked out a hard count getting the Browns to jump offsides. So he has that in his repertoire.

• On Wentz's first completion in the pros, he threw a back shoulder jawn to a seemingly covered Zach Ertz, however, he placed the ball where only the 6'5 Ertz could get it over 6'0 safety Jordan Poyer. Ertz rewarded Wentz with a one-handed grab.

I loved this throw, or rather, the willingness to make it. Not to compare Wentz all season to Sam Bradford, but that's a throw Bradford would never even attempt.

• On the TD pass to Jordan Matthews, first of all, h/t to Doug Pederson on the play design. Here were routes on that play: 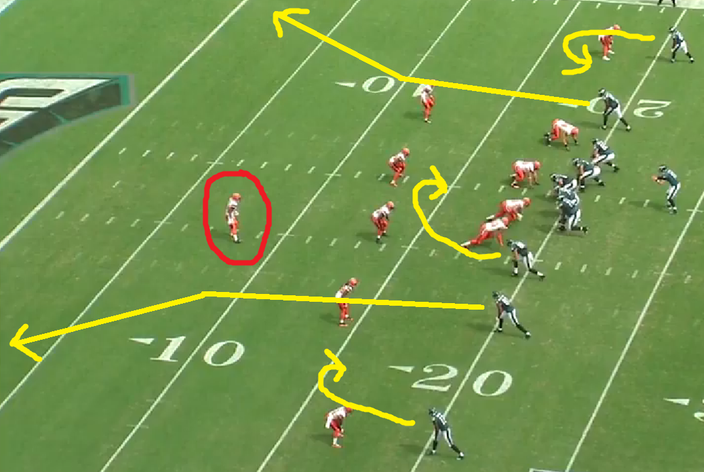 One thing to note here is that Matthews (6'3) is lined up slot left. Dorial Green-Beckham (6'5) is lined up slot right. More often than not, when you're lined up in the slot, you're going to get a shorter slot corner on you or a safety. Either way, you're getting a mismatch. The Eagles seemingly wanted to use their bigger receivers here to their advantage, as they have DGB and Matthews running corner routes. Throw it high, where only your guy can get it. On this play, Wentz had to identify that it was man coverage, while noting the positioning of the deep safety (circled in red).

The deep safety's initial move is toward Wentz's right, so Wentz knows that he has Matthews in single coverage on a smaller DB, and he places the ball only where Matthews can get it with pristine accuracy.

• One of the concerns I had when observing Wentz during training camp was that when he's inaccurate, he'll often miss high. On a little rollout, Wentz tried to flip a pass into Matthews in the flat, and missed high, although he had a pass rusher in his face, who may have affected the trajectory of the throw.

• On the first play of the fourth drive, Wentz did an outstanding job of getting the Browns to show their blitz before checking to a different play. Fran Duffy of the Eagles showed this in a way that I can't:

• In the red zone, Wentz had an open Matthews, but missed him high again.

If you're going to miss, that's where you want to miss when you have a receiver with a size advantage, but this was a missed opportunity.

• One of the things that stood out to me in watching Wentz at the Senior Bowl practices this past January was quickly the ball gets to the target in comparison to other quarterbacks. Here's what we said back in January:

North Dakota State's Carson Wentz is by far the best quarterback here. If there's a word I would use for his play so far, I'd go with "effortless." There haven't been many "wow moments" from Wentz, but the ball just always seems to get there on target, and quickly. You can see a noticeable difference in arm strength between Wentz and the other North team quarterbacks, particularly Cody Kessler of USC. You'll see Wentz drill one in to a receiver, and then on the next rep, you're almost willing the ball to get there faster from Kessler. It's reminiscent of watching Matt Barkley following Michael Vick in training camp reps, although maybe not to that extreme.

Wentz makes sideline throws look easy. During a hurry-up situation near the end of the first half, Wentz fired off a throw on a 10-yard stop route from the opposite hash to Nelson Agholor. This looks easy, and it is... for Wentz. But it requires a strong arm. Matt Barkley, for example, as noted above, is not going to make a throw like this.

• Generally speaking on this drive, you couldn't see it on the TV feed, but it was fun watching Wentz direct traffic and getting players lined up correctly in a hurry-up situation. He is poised beyond his years.

I mean, he's even getting hit while making that perfect throw.

• Small point here, but watch how Wentz gets the entire Browns defense moving away from the play because he really sells the fake pitch, and then he has the height to throw over 6'7 DE Carl Nassib.

• On 4th and 4, Wentz made a big boy throw. Facing immediate pressure, Wentz reacts quickly and hits Ertz in stride for a first down while standing in and taking a shot.

One other note here -- Leading up to the game, Browns DE Carl Nassib criticized Wentz for having a slow release. His release looks pretty good to me here.

• Next play, drop in the bucket on a dime to Nelson Agholor.

• Here Wentz has a big running lane available to him up the middle. I'm a little torn on this one. On the one hand, there's an easy 10 yards to be had here. On the other hand, I do like that he exhausts all his options before taking off to run, which is rare for a rookie with running ability.

There really wasn't much not to like out of Carson Wentz in his rookie debut. He showed off all of his obvious physical traits, but the more-impressive part of his day was that he looked absolutely nothing like a rookie. If you didn't know a thing about Wentz and were just judging him off this game, you'd think he was a seven-year vet.