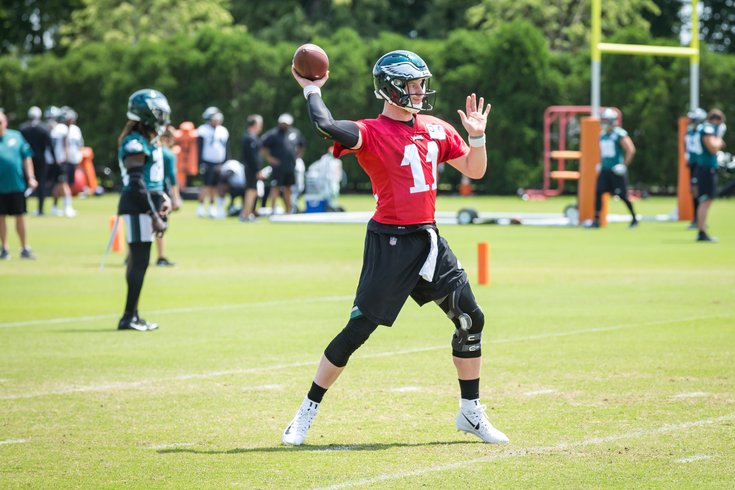 Carson Wentz during OTAs at the NovaCare Complex.

The Philadelphia Eagles players will have five weeks off from now until the start of training camp in late July, and while one quarterback, Super Bowl MVP Nick Foles, has big plans that involve a book tour and a trip to the ESPYs, the still-healing quarterback that he replace, Carson Wentz, has only thing on his mind: Rehab. Rehab. And more rehab.

While most of the players will get a away from the NovaCare Complex for this dead period between minicamp and training camp, Wentz, who tore his ACL in December, and other players still recovering from their respective injuries will continue to put in work at the team facility in the hopes that they'll be ready to go by Week 1 ... if not sooner.

But with how well his rehab has gone to this point, the Eagles quarterback said Wednesday that other than the smaller crowd, there's no reason to change what he's currently doing.

"Same as they've been," Wentz said of his rehab plans once minicamp ends. "Obviously now [all] the guys won't be here, but me and a handful of guys will still be here rehabbing and just doing what we need to do to get back out there."

So what does Wentz need to do over the next five weeks — and in training camp once that gets underway — to be able to get back out on the field?

"Well, the medical staff will put those benchmarks in place for him from a health standpoint," head coach Doug Pederson said prior to practice. "Those are all things that are kind of out of our control [and] my control right now. It's just a matter of steady progression as we build towards training camp. He's going to work extremely hard over the next month, month and a half, and be ready for camp, obviously, and then we'll just reevaluate. But those boxes will all get checked based on what our doctors and training staff will put forth for him."

It's not hard to see how badly Wentz wants to be fully cleared to play. Not for Week 1. Not for the start of the preseason. And not even for the start of camp. No, he wants to be cleared yesterday. After all, this is the guy who said he was throwing while sitting down, not because trainers had told him to do so, but because, as he revealed on Wednesday, he can't stand not playing football.

"I don't know if anyone recommended it. I was just too stubborn to not do anything," Wentz admitted. "During that playoff run and everything, it was tough to just sit around so I just kind of did that myself."

Wentz has done considerably more than that in recent weeks, looking way more mobile than many thought he'd be during this part of the offseason schedule. And keeping Wentz from pushing himself too hard is going to be important as his surgically-repaired knee continues to heal.

The hurdles now standing between the young quarterback and a return to full health may be fewer than they were a few weeks back, but the ones remaining are the hardest to clear.

"I think the biggest thing right now is to just keep pushing along until I'm cleared," Wentz said. "At the end of the day, there's little benchmarks along the way, but there's nothing huge. As you see out here [on the field], I'm doing quite a bit. Obviously, the biggest last hurdle is going to be the contact part."

There's no telling when Wentz will get that all-clear from the doctors, but you can safely bet that the Eagles aren't going to take any chances before the season starts. After all, that's why they have the reigning Super Bowl MVP, to allow them to be patient and cautious with their franchise quarterback, even if that means a somewhat complicated dynamic during camp.

"Well, for me it's going to have to be about communication with both of them," Pederson said of managing the quarterback situation. "I think the biggest factor is just the medical side with Carson. That's out of my control. The experts there know best for the health of our players [and] for the health of Carson. And again, it just goes back to when he's ready 100 percent, then we'll put him out there. But until that time, we're going to continue to keep him working and progressing along."

"It's a fluid process," Wentz added. "I'd love to answer that and tell you, but I feel good with where I'm at. Once training camp comes along, again, we can each day just kind of put a little more and a little more on it. Time will tell when camp comes around."