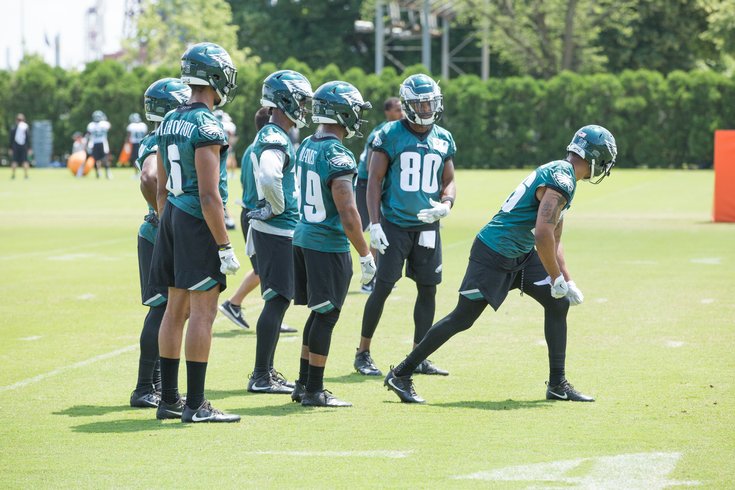 Eagles players during OTAs at the NovaCare Complex.

Do you remember what the Eagles wide receiving corps looked like in 2016, less than two seasons ago?

We don't blame you if you can't remember. Or don't want top. The top two wideouts that year were Jordan Matthews and Dorial Green-Beckham as the Birds WRs were one of the worst positional groups in football.

The only carryover from that campaign is Nelson Agholor, who is more or less a completely different receiver now.

Struggling with a crisis of confidence as he failed to show up, both literally and figuratively through his first few seasons, the former first round pick emerged as a reliable slot receiver and starred last season — catching eight touchdowns and collecting 768 yards as the Eagles flew toward a Super Bowl title. The wide receivers room has transformed once again in 2018.

"We have a new wide receivers coach [Gunter Brewer]," Agholor said last week (their old wide receivers coach Mike Groh was promoted to offensive coordinator). "We added guys, Markus Wheaton, we have Mike Wallace, we are doing a good job having fun competing with each other."

Wallace knows how to win in the NFL and knows how to run fast, as he was tagged to replace the recently traded Torrey Smith as a downfield threat. But that's not all he can do, Agholor was fast to point out.

"Everyone talks about Mike taking the top off but Mike can route you up in the immediate game also," Agholor said. "He has good change of direction."

Alshon Jeffery has not practiced yet in OTAs, recovering from offseason surgery. Though he is expected to be ready for the regular season in three months, his absence is giving other guys chances. Mack Hollins looks to take a step forward in Year 2, as Wheaton and another sophomore, Shelton Gibson, will likely battle for the fifth spot on the depth chart. Jeffery is still around in the NovaCare Complex providing guidance and knowhow, as Agholor and Wallace also begin to step up as leaders in the wideout room.

"You bring another guy in who has played a lot of football like Mike Wallace," Agholor said, "and a guy whose played a lot of football in Markus Wheaton, we pick each other's brains. I get to watch those guys run routes. The same thing happened last year when we brought Torrey Smith and Alshon in here. I try and make myself as well-rounded as possible. Guys who do things really well, I want to emulate those things."

With the skill players honing their craft, the receivers still don't know who will be throwing to them in Week 1 as Carson Wentz continues to impress in his rehab from December ACL surgery. Super Bowl MVP Nick Foles is currently holding down the fort, ready if called upon to play as much as needed. The uncertainty doesn't bother Agholor at all.

"He's done a great job," he said of Wentz' return. "He loves football so much and we are his guys. He wants to make sure he takes care of his players. Nick is a quarterback in the league that's going to make plays and that’s what he's doing. He does a great job of communicating, and when he takes the huddle he's our quarterback."

Does Agholor think Wentz will be ready in Week 1?

"He looks like a guy who is making the right steps forward," Agholor said. "I am not a doctor but I know him as a friend and he's my quarterback. And when he lines up there, he wants to shred the defense."