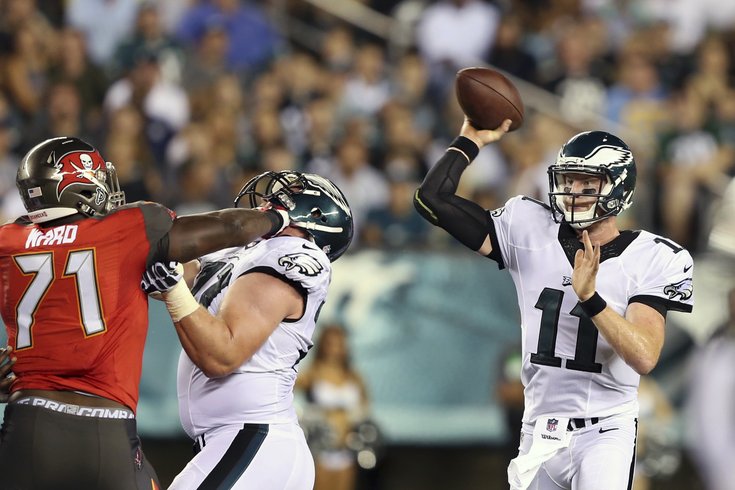 Carson Wentz showed why the Eagles think he can be a franchise quarterback Thursday night.

The first Philadelphia Eagles' first preseason game of 2016 is in the books, but more importantly, it was our first glimpse of rookie Carson Wentz as an Eagle in a game setting. And so, we'll over-analyze the crap out of it.

Wentz first entered the game in a two-minute offense scenario, and on the re-watch, it was better than I remembered. His first throw was to Nelson Agholor on the sideline. This throw obviously needs to be lower, although maybe I can buy that he was a little amped up. But make the catch, Agholor.

Throw number two was a play that displayed Wentz's athleticism and arm strength. He climbs the pocket, keeps his eyes down the field, and zzzzzzip to Zach Ertz. The best part of this play is how effortless Wentz makes it look.

To begin, the center is put on roller skates, and gets pushed back into him. No quarterback is going to be successful when their center is driven back seven yards into their lap:

And watch this atrocious route by Rueben Randle.

This is man coverage on a deep route. This is what receivers should live for. Randle runs three-quarter speed down the sideline seemingly having no interest in beating his man, turns his head as he's throttling down, and looks legitimately surprised the ball is coming his way. Awful.

On this next throw, Wentz is once again high, but it's a catch his receiver should make. The Bucs are sending six on a blitz. Wentz reads it and gets the ball out quickly:

But here's what I really like on this play. First, Wentz knows he's going to get hit, but he stands in and takes the shot as he delivers the football.

And secondly, I love the quick release. This is slow-mo:

This next play is great. The center snaps the ball too early, and the entire offensive line is beaten. Watch RT Halapoulivaati Vaitai. He doesn't even get out of his stance. There are multiple free rushers coming at Wentz, but he gets outside them and delivers an accurate sideline throw to Paul Turner, who ran his route short of the sticks. Wentz gets no help at all on this play and still almost converts a 3rd and 11.

Here's a little pre-snap recognition. Wentz sees the slot corner inching toward the line to blitz, so he calmly hits the slot receiver for an easy completion. Nothing complicated here, but nicely done:

Here you see his poise. There's a bad snap, but Wentz tracks it down, scoops, gets outside the DE, looks downfield for an open receiver, doesn't see one, and dumps it out of bounds. Golf clap.

Here's the pick. The receiver runs a good route, but Wentz gets late pressure and tried to throw as he's being hit. I'm OK with the decision here. The receiver is open, so you want to try to hit him. He simply delivers it too high, although obviously the hit affected the throw.

And some more bad. Wentz steps up in the pocket to give himself a cleaner look, chooses the correct receiver, and just missed him.

And finally, the flip. This is 3rd and 7. If he slides here during a regular season game, he's going to be criticized for not getting the first down. I have no problem with this from Wentz's perspective. It's football. However, from Doug Pederson's perspective, I'd maybe hold off calling designed QB runs in the preseason.

In summary, Wentz showed that there's a lot to look forward to, but certainly he's not yet a finished product, and it would be nice if his teammates would give him a little more help.