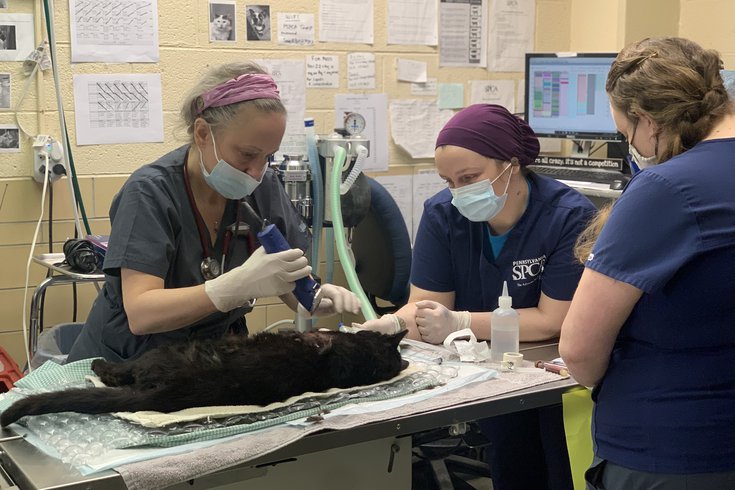 Two people let their dogs attack a cat that had been on porch of home in Philadelphia's Frankford neighborhood on Tuesday morning. The cat was seriously injured, and Pennsylvania SPCA posted video of the incident on social media as they search for the people who had been walking the dogs.

Two people were caught on video allowing – and even encouraging – their dogs to attack a cat in Frankford, leaving the feline in critical condition.

The Pennsylvania SPCA posted a clip of the incident on social media Tuesday afternoon and is asking for help identifying the people who were walking the dogs.

LATEST: Two juveniles arrested for alleged roles in dog attack of Buddy the cat in Frankford

The cat, named Buddy, had been on the porch of a rowhome on the 1600 block of Granite Street on Tuesday morning. In the video, the cat appears to notice the dogs first, and after slipping through the railing separating the front porches of two homes freezes as the dogs pass by.

The dog walkers nearly go past the cat, before at least one of them sees Buddy. Both people then drop the leashes they are holding and sic the dogs on the feline.

During the attack, one of the two people sought by the PSPCA is heard shouting "good boy."

As the mauling is happening, a person comes out of the house where the attack took place and intervenes.

This tweet contains video of the incident. The dogs attacking the cat has been blurred but some still may find the video disturbing to watch.

The Pennsylvania SPCA is asking for the public’s help identifying two individuals who appear to be responsible for an intentional dog attack on a family’s cat in the city’s Frankford neighborhood this morning. pic.twitter.com/tBvTJJOTiL

The PSPCA described Buddy as a family's cat and said it was taken to the PSPCA's hospital to be treated for life-threatening injuries.

The organization sent an update on Thursday noting that Buddy made it through the night on Wednesday and that they're optimistic about his chances for a full recovery even though he remains in critical condition.

Gillian Kocher, a spokesperson for PSPCA, said the dog walkers could be charged with animal fighting and aggravated cruelty to animals, both of which are felonies.

​​"This act of cruelty is especially heinous for its apparent intentional nature," Julie Klim, PSPCA's CEO, said. "An innocent animal simply sitting on a porch may lose its life for absolutely no reason. Animals are beloved members of our family, and should be treated as such."

Anyone with information that could help investigators identify the two perpetrators is asked to call SPCA's cruelty hotline at (866) 601-7722 or send an email to cruelty@pspca.org. Tips can be submitted anonymously.