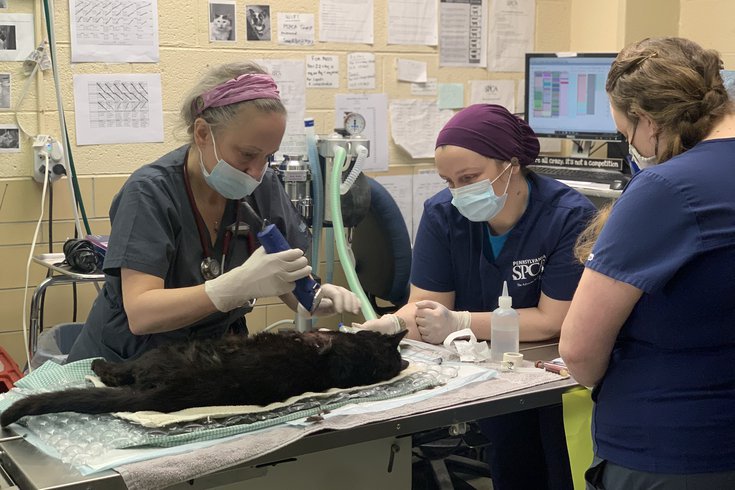 Two suspects have been arrested for allegedly encouraging two dogs to attack a cat sitting on the porch of a Frankford rowhome earlier this week.

A 12-year-old and 17-year-old have been taken into custody for allegedly encouraging two dogs to maul a cat sitting on the porch of a Frankford rowhome earlier this week.

The two suspects wanted in connection with the brutal attack surrendered to authorities Friday, the Pennsylvania SPCA wrote on social media. The juveniles came into the PSPCA's offices with a parent at around 12 p.m. Friday to address the alleged incident.

The child and teenager have both been charged with animal fighting, aggravated animal cruelty and conspiracy. The first two charges are felonies.

However, the crimes that the suspects are accused of do not qualify them to be charged as adults, according to the PSPCA. Both suspects are now awaiting a custodial determination hearing.

The two dogs connected to the alleged attack have also been apprehended and are currently being held as the investigation continues, the PSPCA said.

BUDDY UPDATE: The Pennsylvania SPCA announces that after following up on numerous leads, its Officers have identified...

The PSPCA released a video Tuesday that showed two people encouraging a pair of dogs to attack a cat sitting on a porch in the Frankford neighborhood of Philadelphia.

The cat, named Buddy, had been on the porch of a rowhome on the 1600 block of Granite Street on Tuesday morning. In the video, the cat appeared to notice the dogs first, and after slipping through the railing separating the front porches of two homes, froze as the dogs passed by.

The dog walkers nearly went past the cat, before at least one of them saw Buddy. Both people then dropped the leashes they were holding and sent the dogs to attack the feline.

During the attack, one of the two suspects sought by the PSPCA could be heard shouting "good boy."

As the mauling was happening, a person came out of the house where the attack took place and intervened.

Buddy, described by the PSPCA as a family's cat, had to be taken to the PSPCA's hospital to be treated for life-threatening injuries.

"This act of cruelty is especially heinous for its apparent intentional nature," PSPCA CEO Julie Klim said. "An innocent animal simply sitting on a porch may lose its life for absolutely no reason. Animals are beloved members of our family, and should be treated as such."

Since the alleged attack, the organization's Humane Law Enforcement team had been looking for help identifying potential suspects in the mauling.

Buddy remains in critical condition, but the PSPCA is hopeful and confident that the feline will make a full recovery.

The organization is accepting donations for Buddy and his medical care.