Actor Tom Hanks hosted the 90-minute primetime celebration, which consisted of musical performances and a fireworks show across Washington, D.C. 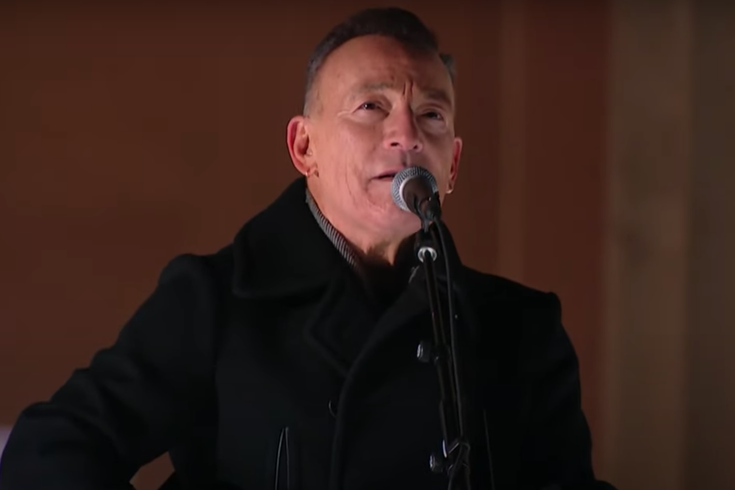 Bruce Springsteen performed 'Land of Hope and Dreams' from the steps of the Lincoln Memorial on Wednesday night as part of the 'Celebrating America' concert.

The inauguration of President Joe Biden and Vice President Kamala Harris closed out on Wednesday night with a star-studded "Celebrating America" event that featured musical performances, speeches and a fireworks show which lit up the entire Washington, D.C. sky.

The 90-minute inauguration special, hosted by actor Tom Hanks, focused on the perseverance of U.S. democracy, the strength of the American people and the ability to unite during difficult times.

The primetime concert was kicked off by a performance from Bruce Springsteen. A lifelong Democrat, the New Jersey native performed "Land of Hope and Dreams" on the steps of the Lincoln Memorial.

But The Boss was not the only Jersey native to share his musical talents to the country on Wednesday night. Fellow Democrat Jon Bon Jovi followed Springsteen's performance with a rendition of the Beatles' hit song "Here Comes the Sun."

Along with Springsteen and Bon Jovi, Burlington County native Ant Clemons teamed up with Justin Timberlake to tell the country that "better days are ahead."

Other performances during the concert came from John Legend, Demi Lovato, Lin Manuel-Miranda, the Black Pumas, Tim McGraw and Tyler Hubbard. Actresses Kerry Washington and Eva Longoria also made appearances during the celebration to introduce stories of "young people making a difference" and "American heroes."

Biden also spoke to the country for a second time on Wednesday night. Standing at the Lincoln Memorial, the 78-year-old Biden reiterated his inaugural address message of coming together during tough times.

"This is a great nation," Biden said. "We're good people. To overcome the challenges in front of us requires the most elusive of all things in a democracy: unity."

Harris, the first female vice president in U.S. history, also addressed the American people from the steps of the Lincoln Memorial on Wednesday night. She said that "this moment embodies our character as a nation."

"It demonstrates who we are, even in dark times," Harris said. "We not only dream, we do. We not only see what has been, we see what can be.”

The event closed out with a performance of "Firework" by Katy Perry at the Lincoln Memorial, which preempted a fireworks show across the nation's capital to celebrate the new presidential administration and close out the inauguration festivities.

The "Celebrating America" event was one of several inaugural celebrations that were held virtually due to the COVID-19 pandemic. The in-person celebrations like inaugural balls and parades that typically highlight a presidential inauguration did not take place this year due to the public health crisis.

You can watch the entire "Celebrating America" event below.