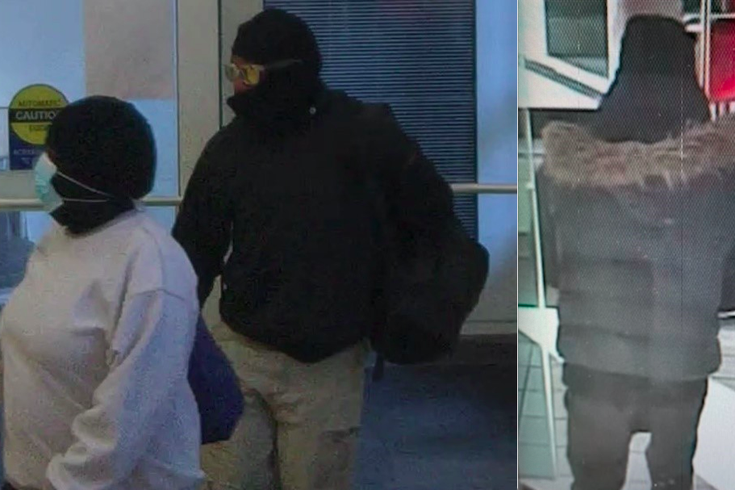 The three robbers who hit two banks in Center City within roughly ten minutes on Thursday morning. The subject in the first robbery is on the right and the two subjects in the second are on the left.

Two Center City banks were robbed within roughly 10 minutes of each other on Thursday morning. The FBI is now looking for help identifying the perpetrators according to two press releases put out this afternoon.

The first incident was perpetrated by one individual at the Santander Bank at 1101 Market Street around 11 a.m. The second occurred about 10 minutes later, when two robbers hit the Wells Fargo Bank at 2005 Market Street.

In the first robbery, the subject entered the bank and handed a demand note to the teller before he fled on foot with an unspecified amount of money.

He was described as a Black male between the ages of 18 and 21 and 5'3" to 5'5" tall. He had a blue mask, black pants and a puffy black jacket with brown fur on the hood.

In the second robbery, the two subjects handed the teller a threatening note and then fled on foot.

The first subject was described as a Black male between 60- and 70-years-old. He stood between 5'4" and 5'6" tall and was wearing a ski mask with a coat and work boots, all black, with tan pants and mirrored glasses.

He was accompanied by a Black female who was between 5'2" and 5'4" with a medium build. She had on a gray sweatshirt, a black headscarf and a blue mask. She was also carrying a dark-colored bag.

Center City banks have become a frequent target recently. The FBI put out a press release on Tuesday about another bank robber they're looking for. He's hit banks in the neighborhood seven times in the last four months.

All these subjects are considered armed and dangerous.

People with information about these robberies or the subjects are urged to call the FBI/Philadelphia Police Department Violent Crimes Task Force at 215-418-4000 or go to tips.fbi.gov.

A reward is being offered for information leading to the capture of any of these subjects. Tipsters can remain anonymous.