From a teen serial killer to a lost soul that really likes electrocution, the Chicago rapper did not disappoint 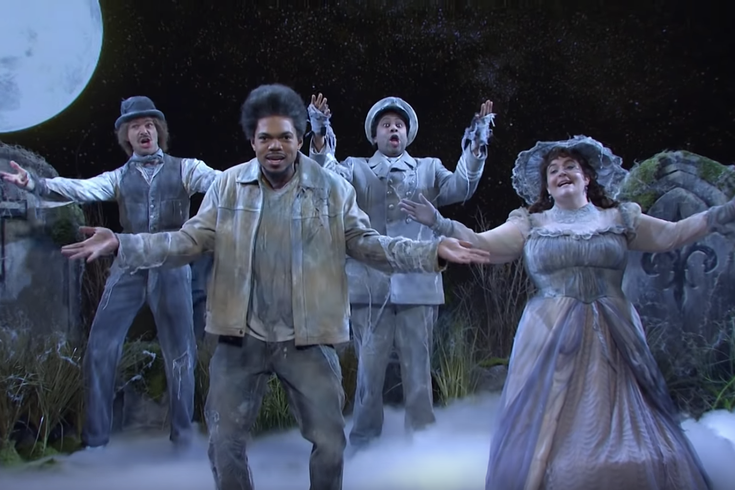 Chance the Rapper returned to host 'Saturday Night Live' on Saturday and starred in an array of hilarious Halloween-themed sketches, including "Spooky Song" with Aidy Bryant, Kenan Thompson, and Mikey Day.

Chance the Rapper returned to host "Saturday Night Live" for the comedy show's Halloween episode. His energetic and incredible comedic timing paired well with the absurdity of the SNL spook fest.

Following in the footsteps of the "David S. Pumpkins" sketch, "Spooky Song" is a graveyard musical of lost souls that sing the tales of how they died to two frightened teens played by Kyle Mooney and Heidi Gardner. While the spirits played by Mikey Day, Kenan Thompson, and Aidy Bryant were open about their death tales, Chance the Rapper was a bit shy to share his story.

He notably tried to "pass" his turn but the spirts, teens, and even a disapproving owl weren't having it. (You see, it was one of those "had to be there" death situations.) After some push and shove, he finally tells his death story in gruesome detail, and, uh, yeah, let's just say he really liked being electrocuted.

Chance returned to play Lazlo Holmes, a basketball reporter that somehow finds himself covering sports he doesn't understand. First it was hockey, and now it's the world of e-sports. MSG's usual correspondent is out taking the PSATs and Holmes thought this "League of Legends" World Championship, or as he calls it "League of Legos," was a league of basketball legends. Oops. Is this a real Halloween sketch? No, but the reporter is clearly spooked by the site of teen gamers, their groupies, and a $7 million cash prize.

The rapper takes on the part of an upbeat teen serial killer that may have murdered his parents and stuffed them in a fridge. It's cool, though, because he has snacks! All the snacks you can imagine! All of his friends are so excited by all the snacks. That is until they start realizing there's a blood stain on the carpet, the fridge is taped up, and his parents are apparently "on vacation." Don't worry though, he has Tasty Toaster Tarts, so, really, who cares?!