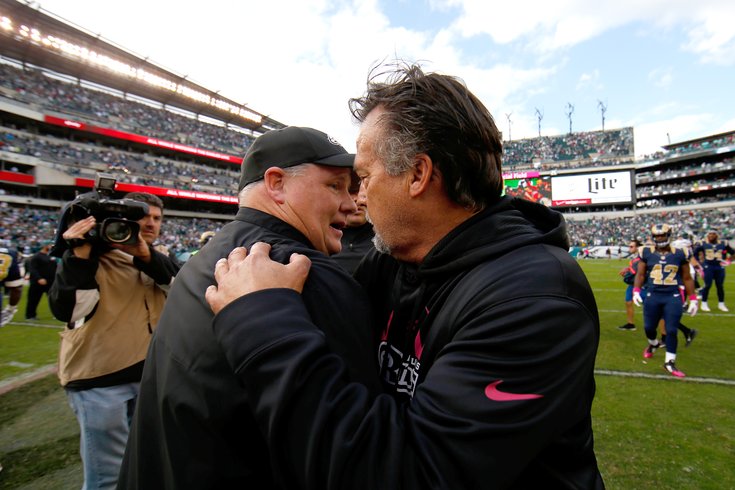 "Let's both turn down a #1 pick for a QB coming off two ACL tears this offseason. Hug on it?"

According to both Chip Kelly and Rams head coach Jeff Fisher, there's some team out there willing to give up a first round pick for Sam Bradford. Both coaches have gone out of their way to tell you that.

"I was offered a first round pick for him this morning," said Kelly in an impromptu interview session the day after the Eagles traded for Bradford.

Fisher echoed those sentiments, via Mike Florio of ProFootballTalk.com:

“There were some discussions, yes, but from our standpoint, the first-round pick — obviously it’s attractive, but you still don’t have a quarterback. It’s a late pick and then would we move up and get into position to draft one? It didn’t make sense to us,” Fisher said.

Maybe Kelly and Fisher are lying. Maybe not. When you look at the draft order, the one team that makes the most sense is the Cleveland Browns, who have multiple first round picks at 12 (their own pick) and 19 (acquired from Buffalo). The 19th overall pick would of course be the "late pick" pick Fisher referred to.

Nobody has come out and definitively reported that it was the Browns (if anyone). However, former NFL general manager and current NFL Network analyst Charley Casserly said that he was hearing that the Browns did indeed offer one of their first round picks while appearing on the Michael Kay show on ESPN New York 98.7.

While discussing his mock draft, Casserly casually noted, "I'm looking at Cleveland, the information I have is that they offered a one for Sam Bradford, ok, so clearly they're aggressive in trying to get a quarterback. They've got two one's. (They) can't be sold on what (they've) got. I think they'll be aggressive in the draft."

So there you go -- It was the Browns. Unless everyone is lying.