As seems to be common practice now, the star athlete takes out an advertisement in the local newspaper thanking the organization and fans upon leaving that market after a long and successful tenure. Apparently Chase Utley thought enough of our fine city that he decided to take out ads in two newspapers. Who said print is dead?

Utley had a full-page ad in both the Inquirer and Daily News that started with the caption, “Thank You Philadelphia”:

Hardest working guy in Philly. Chase Utley took out full-page ads in both the @PhillyInquirer and @PhillyDailyNews: pic.twitter.com/UGEq8xJsmi 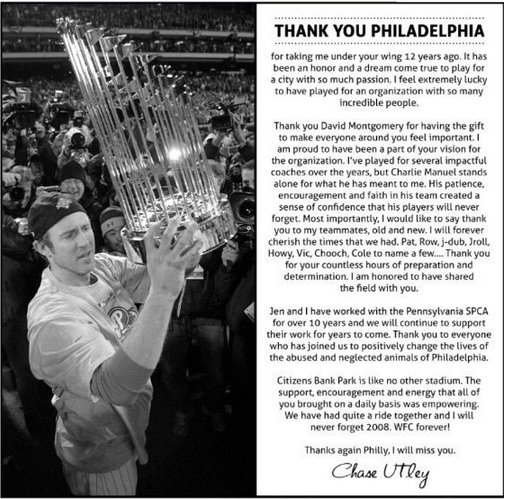 Now only Ryan Howard and Carlos Ruiz remain as candidates from the 2008 Phillies to take out a full-page ad upon their departure. Pressure's on, fellas. In his personal ad, Utley thanks David Montgomery, Charlie Manuel, his teammates (Burrell, Rowand, Werth, Rollins, Howard, Victorino, Ruiz, and Hamels were the names who were called out specifically), the Pennsylvania SPCA, and finally, the fans. At the bottom of the ad, Utley alludes to one of the moments he’ll always be remembered for by writing, “WFC forever!”