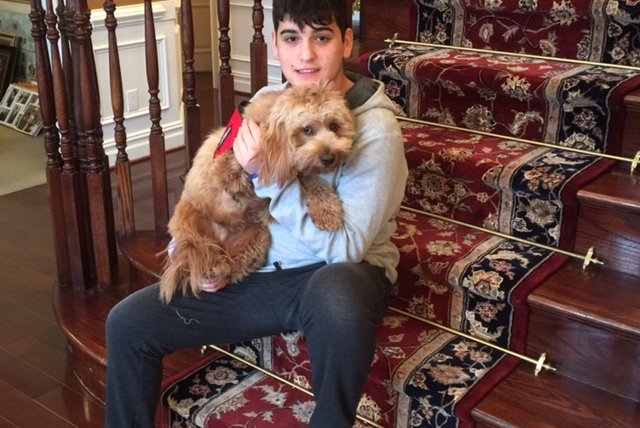 Ben Shore and his service dog, Charlie, pictured at the family's home in Cherry Hill, have never once gone together to Cherry Hill East High School together. Charlie is trained to detect the onset of a debilitating panic attack, one of Ben's disabilities, but school district policy bars service animals from school buses.

Ben Shore, a 16-year-old junior at Cherry Hill East High School, has had a service dog for about 18 months to help him cope with multiple disabilities.

Charlie, a goldendoodle, is trained to detect the onset of a panic attack and can calm Ben while warning others. The dog also helps him cope with ADHD and autism.

The golden retriever and poodle cross-breed “has been a calming force” in the Shores' South Jersey household, said his father, Eric A. Shore, a lawyer. Ben now takes five medications, down from more than 20.

And while Charlie is a champ of a service dog in the Shore’s home, the animal has never had the opportunity to help Ben at the high school, where classes and social situations can send the teen's anxiety spiraling.

"It is the parent’s responsibility to safely transport the service animal to and from school," the policy reads. “In no case can a school bus be used for this transportation.”

But the bus ban on service animals appears to directly contradict state law adopted in 2015. The law reads, “A student with a disability, including autism, shall be permitted access for a service animal in school buildings, including the classroom, on school buses, and on school grounds.”

A spokesman for the state’s Division on Civil Rights declined comment on the discrepancy.

Because Charlie is barred from the bus, Shore rides his bike or walks to school most days, leaving the service dog at home. 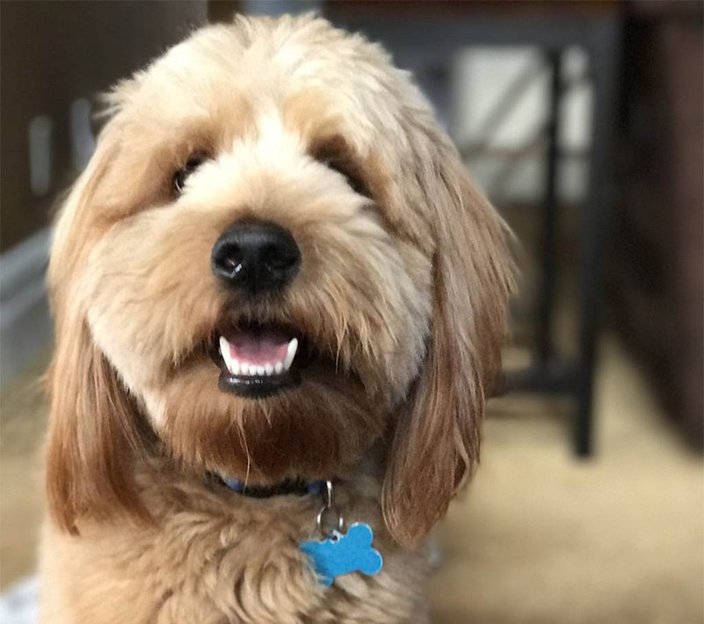 And while the bus ban is the biggest issue, Ben Shore takes issue with other elements of the district’s service animal policy. He is especially annoyed by a provision that designates a teacher’s assistant to replace a dog in certain instances, such as when other students' have allergies to the animals.

Several times, the student told Meloche he planned to bring his dog to school on Tuesday. Meloche responded each time that he should not bring the dog. Shore also raised the possibility with Meloche that he would contact authorities to complain that state statutes were not being followed.

A video clip of a portion of the exchange was posted on Shore’s YouTube channel and reposted on a local Facebook page, Cherry Hill United.

But Wilson indicated the policy is being revised, though she declined to specify the changes.

She said Meloche will, however, talk after the board considers and adopts proposed changes at its January 24 meeting.

'STUDENTS NEED TO BE TREATED FAIRLY'

Shore, who sees himself as an activist on a number of topics, not just service animals, said he’s had run-ins over his previous video postings and other issues in the district, including his Individualized Education Program, or IEP, and his allegations of bullying by other students.

“My hope is the school will recognize that students need to be treated fairly and fully allow everyone to have a fair and equal quality of life,” said Shore.

Ben's father said he had no issue with the district establishing “a process and order” for bringing service animals into schools. "There is definitely some conflict between the law and the school policy," he said.

“I have a feeling the district will do the right thing, read the state laws and make policy in compliance with the laws,” Eric Shore said.

“Most violations are out of ignorance,” he added.