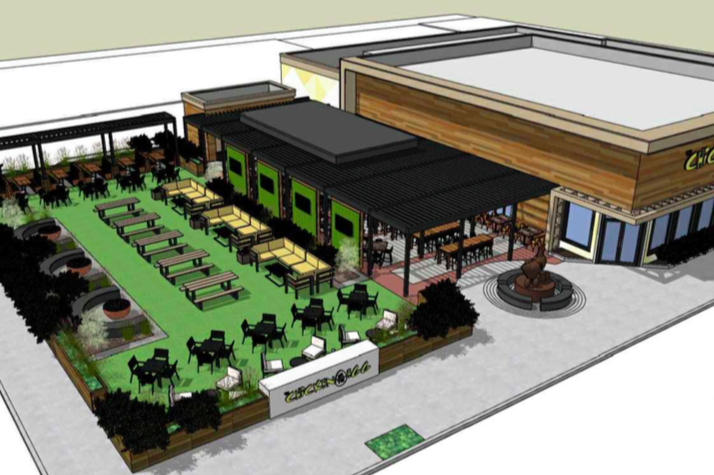 The Chicken or the Egg's new location, under construction at the Renaissance Square shopping center in Marlton, is set to open by next summer.

The Chicken or the Egg will open its new Marlton restaurant by next summer with a feature distinguishing it from its popular Beach Haven location.

The new restaurant will feature the same food menu and color scheme as its Jersey Shore location, but it will include a beer garden with an outdoor bar, the Courier Post reported. The original location does not serve alcoholic beverages.

The new Chicken or the Egg, affectionately known as Chegg, is under construction at the Renaissance Square shopping center. It will have room for 210 patrons in a large outdoor area and feature lounge seating, fire pits and a space for live music.

News of the second Chegg location broke in May after the Evesham Township Planning Commission approved the project. The restaurant will occupy the site of a former Kmart store at Route 70 and North Locust Avenue.

The project's developer, the LaScala Restaurant Group, owns several restaurants in Philadelphia and South Jersey. They include LaScala's Fire, located in the Promenade at Sagemore shopping center – about a mile away from the new Chegg location.

An earlier proposal had called for two new eateries – a Mexican restaurant and an Italian restaurant.

The planning board agreed to a three-year period in which The Chicken or the Egg will maintain its large outdoor dining area. After that period, it's possible that a second restaurant may be built at the location.

The Chicken or the Egg has been serving customers at the Jersey Shore since opening on Long Beach Island in 1991.

The restaurant is known for its breaded and naked wings that come in 16 sauces of varying spiciness. The eatery also has an expansive all-day breakfast menu, sandwiches, nachos, fries and other beach favorites. Chegg stays open 24 hours a day during the summer.