The actress's daily TV show was all about Philadelphia on Wednesday 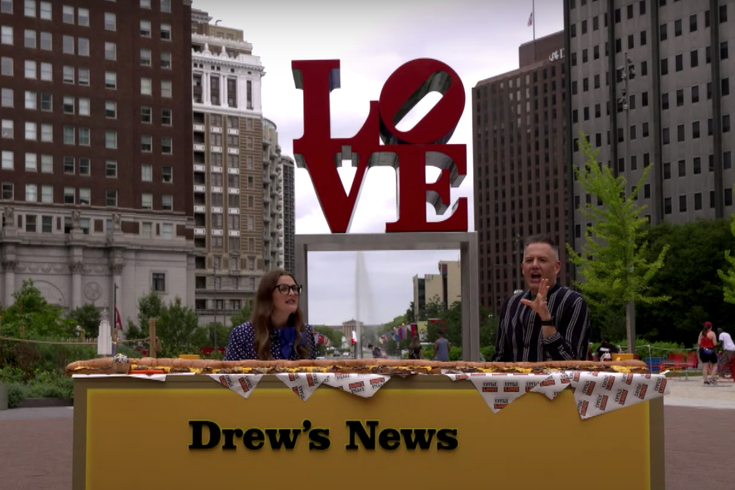 It's fair to say that Drew Barrymore's choice in the age-old debate between Pat's and Geno's would certainly be the latter cheesesteak shop.

During a "Drew's News" segment filmed at LOVE Park in Center City that aired Wednesday on "The Drew Barrymore Show," the actress enjoyed an 8-foot Geno's cheesesteak alongside TV personality Ross Matthews.

Barrymore opened the segment by joking that it's "the only news that kindly requests eight feet of your city's finest sandwich."

When asked what type of cheese she would put on her sandwich, Barrymore called on Geno's Steaks owner Geno Vento to select the best option. Vento told Barrymore that they made her "the famous one" — with Cheez Whiz.

Well, based upon Barrymore's reaction after taking her first bite, the cheesesteak didn't disappoint.

"Oh my God ... Geno. This is incredible," Barrymore said.

Barrymore had been spotted filming her "Drew's News" segment in Philly late last month, when observers took note of the massive Geno's cheesesteak on the set.

Wednesday's episode was all about Philadelphia.

"What I love most about Marsh & Mane is that it has the latest, greatest, even the big and small brands, that you may find in your big-box retailers or ones that you've never heard of," Oliver said.

The episode also included an appearance from Marie Lambert, a local educator whom Barrymore called a "real life hometown hero."

Born and raised in Philly, Lambert has spent 30 years educating and working with students in the city. She started the True Way Youth Empowerment Foundation, a nonprofit that helps students build their problem-solving and critical-thinking skills.

"Our mission is to empower, inspire and enlighten young people to tap into their greatness, to think outside the box, to be problem-solvers and critical thinkers and to build strong character," Lambert said. "We do a series of games and activities to really work through a problem without getting angry or using foul language or violence. They really have to use their minds to really think about what they would do and how they would solve a problem."

The organization typically puts on conferences and workshops for students, but those events were canceled due to the COVID-19 pandemic.

In the meantime, Lambert started "Cooks with Books," an online educational experience that pairs cooking with literacy. The program consists of Lambert making a dish while reading a book on social media.

Lambert said her organization is planning to host a youth virtual conference in January. Educators and professionals in business, the arts, science, health and wellness will work alongside students.

Barrymore finished the interview by presenting Lambert with a $20,000 donation to the True Way Youth Empowerment Foundation on behalf of Jada Toys and B-Kind Dolls.

The episode also included shoutouts to the LOVE sculpture, the Eagles, Rocky Balboa and soft pretzels.

"It was such an honor to be in this fabulous city today," Barrymore said to close out the show.

Barrymore's daily talk show premiered last fall and was nominated for three Daytime Emmy Awards this year. The show is now in its second season and airs weekdays at 9 a.m. on CBS3.