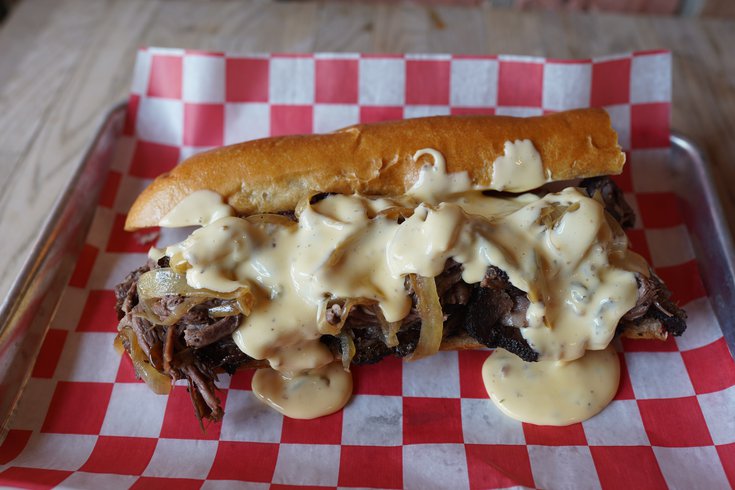 The Smoked Brisket and Queso Wiz Barbecue Cheesesteak, a collaboration between Pat's King of Steaks in South Philly and Morgan's Brooklyn Barbecue in King of Prussia, will be available at both shops starting at noon on Wednesday, Sept. 22, 2021. Proceeds will support the Philadelphia nonprofit Sanctuary Farm.

A mouthwatering variation on the classic Philly cheesesteak will be on sale at Pat's King of Steaks and the recently opened Morgan's Brooklyn Barbecue in King of Prussia on Wednesday to support a good cause.

The two businesses have joined forces on a Smoked Brisket and Queso Wiz Barbecue Cheesesteak that brings a smokehouse twist to the Philadelphia staple.

They'll be available at Pat's King of Steaks, 1237 E. Passyunk Ave. in Philadelphia, and Morgan's Brooklyn Barbecue, 160 N. Gulph Road, Suite 1397, King of Prussia, from noon until the special cheesesteaks are sold out.

Half of the proceeds from each sandwich sold will support Sanctuary Farm, a Philadelphia-based nonprofit that seeks to address health inequities resulting from systemic racial oppression and economic injustice. The organization converts abandoned and neglected areas in the city into spaces that promote safety, hospitality, nutrition and growth.

Since 2017, Sanctuary Farm has grown and harvested over 7,800 pounds of fresh, sustainably grown vegetables that have gone to hundreds of families in the Sharswood section of Philadelphia.

Pat's owner Frank Olivieri said his wife, Nancy, selected Sanctuary Farm because of its impact and service in the city.

Olivieri told PhillyVoice he was eager to team up with Morgan's Brooklyn Barbecue, which opened its King of Prussia location earlier this year and now has three total, including the original restaurant in Brooklyn and a ghost kitchen in Manhattan.

"They invited us up for a tasting and we brought some of our bread," Olivieri said. "We tasted the sandwich and it was pretty amazing. I mean, a brisket sandwich with smoked poblano Velveeta cheese and caramelized onions? Yeah, it was pretty damn good. The brisket was absolutely amazing. It wasn't oversmoked or undersmoked. It just fell really nicely right in that groove."

The collaboration comes less than a week after a violent incident outside Pat's King of Steaks left one man dead and several others injured. In August, another man was killed in a fatal shooting outside the South Philly landmark.

Olivieri, who has aided police in their investigations of the incidents, expressed sadness about the loss of life. He said he was grateful that supporters and customers of Pat's haven't turned away from the business.

"Things are back to normal," Olivieri said. "Since the first incident, we put an additional seven cameras in, so we have more than 30 high-definition cameras. They're so good you can practically count the pores on people's faces. If anybody's here doing something they're not supposed to be doing, they're going to be caught."

Glazier was sorry to hear the news that a person had died outside Pat's King of Steaks. He noted that New York is reeling from a shooting last Wednesday on Manhattan's Upper East Side, where a man suffered a leg injury during an attempted gun-point robbery at the upscale Philippe Chow restaurant on East 60th Street.

Wednesday's collaboration, which had been planned before the incident last week, will be an opportunity to try to help restore the sense of community around Pat's and support a local nonprofit with funding and visibility.

"There are so many great charities out there, but when you hear about what everyone has been going through in these hard times, that one was a no-brainer when I was told about that," Glazier said. "Hopefully, this gets Sanctuary Farm some money and recognition."

When Olivieri visited the King of Prussia restaurant to sample the smoked brisket cheesesteak, Glazier recalled a friendly point of rivalry that came up about how New York subs and Philly cheesesteaks are served.

"The second we bring it out to the table, Frank goes, 'I can tell you guys aren't from Philly,'" Glazier said. "I'm like, 'How can you tell?' He says, 'Because in Philly we don't cut the bread all the way through.' We had separated the top from the bottom. Everybody has their regional things."

Glazier said the smoked brisket cheesesteaks, made with prime beef, will not disappoint. He encourages barbecue lovers and Pat's lovers to come out Wednesday.

"Wednesday is supposed to be a nice day," Olivieri added. "Hopefully, it's going to be a good turnout."