Found at local supermarkets, the popular brand will soon have its first storefronts in Pennsylvania 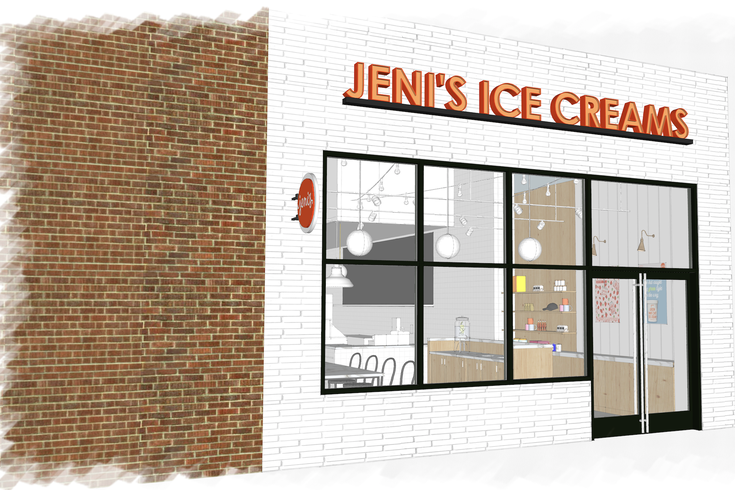 The rendering above shows the planned Fishtown location of Jeni's Splendid Ice Creams at 1322 Frankford Ave. A second shop also will be opening at 1901 Chestnut St. in Rittenhouse.

Philadelphia's ice cream scene — is that a scene, ice cream? — has been expanding lately and soon will have another two shops to visit.

Jeni's Splendid Ice Creams, a popular brand with more than 40 locations in cities around the U.S., will open a pair of shops this fall in Fishtown and Rittenhouse. They'll be the first Jeni's locations in Pennsylvania.

Pints of Jeni's Splendid Ice Cream have been available already at ACME, Whole Foods, Wegman's and MOM's Organic Market, but soon Philly residents can get a taste of the brand's fresh scoops. The company describes its ice cream as "uniquely smooth" in texture with a buttercream body. They also avoid stabilizers and emulsifiers in favor of building texture and flavor without them.

"We shipped our first order to Philadelphia in 2005 and people have been asking us to open there ever since," founder Jeni Britton said. "It's just been a matter of finding the right spot. We make ice cream to bring people together and we design our shops as gathering places.

"Our ideal is to join neighborhoods where we can become an active part of the community, and we think we've found that in Rittenhouse Square and especially in Fishtown. Fishtown has this historic, enduring sense of community that is so rare a find. Honestly, we just feel lucky to be a part of the neighborhood story at this moment in time. Can't wait to open."

The news comes after recent Philly newcomer Leeuwen's Ice Cream opened its first shop in Midtown Village in August and recently announced plans to expand to Fishtown and Rittenhouse, as well, some time next spring.