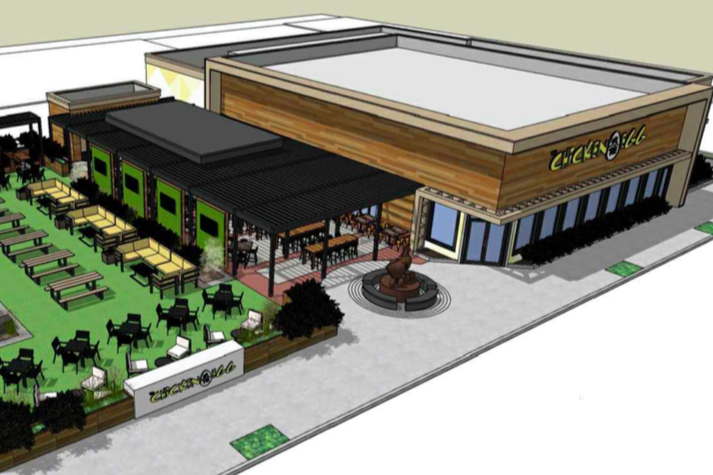 The rendering shows plans for The Chicken or the Egg at Renaissance Square in Marlton, Burlington County. The original Chicken or the Egg opened in Beach Haven, Long Beach Island, in 1991 and has a been a mainstay at the Jersey Shore ever since.

The Chicken or the Egg, a staple of Long Beach Island for the past 30 years, is planning to open a second restaurant at Marlton's Renaissance Square, according to Evesham Township planning documents.

The popular Beach Haven restaurant, known as Chegg, for short, is slated for the shopping center at Route 70 and North Locust Avenue, occupying the former site of the Kmart in Marlton.

The developer for the project is listed as the LaScala Restaurant Group, which owns several restaurants in Philadelphia and South Jersey, including LaScala's Fire, about about mile away form the proposed Chicken or the Egg location, at the Promenmade at Sagemore shopping center, also in the Marlton section of Evesham Township.

The group also owns a LaScala's Fire in Center City and La Scala Birra in Pennsauken, along with other restaurants in New Jersey and Pennsylvania.

Planning documents show renderings of the restaurant featuring The Chicken or the Egg signage and a large outdoor eating area.

The Chicken or the Egg is widely known for its breaded and naked wings that come in 16 different sauces of varying spiciness. The restaurant also has an expansive all-day breakfast menu, sandwiches, nachos and fries and other beach favorites. During the summer in Beach Haven, the restaurant is open 24 hours a day.

Contacted Friday morning, the staff at Chicken or the Egg declined to comment about plans for the new location.

A post on the Facebook page A View from Evesham said the plan to open The Chicken or the Egg was approved unanimously at Thursday's township planning commission meeting. The Evesham Township planning commission's Thursday night agenda showed the plan was slated to be discussed. As of Friday afternoon the township had not posted the minutes from the meeting, which would confirm how the board voted.

A earlier proposal from La Scala Group in December had called for two new eateries – a Mexican restaurant and an Italian restaurant, joined by a beer garden.

Chicken or the Egg has been approved at Evesham Township Planning board by a unanimous vote! Its official! Chegg is...

According to the Facebook post, The Chicken or the Egg will have seating for 210 patrons in the outdoor area, along with lounge seating, fire pits and space for occasional live music. The planning board agreed to a three-year interim period, during which The Chicken or the Egg will maintain its large outdoor dining area. After that period, it's possible that a second restaurant may be built at the location or the setup will remain the same.

A timeline for the project is not yet clear, but it's an exciting development for The Chicken or the Egg fan in the Philadelphia area, who can look forward to a South Jersey location to visit in the future.