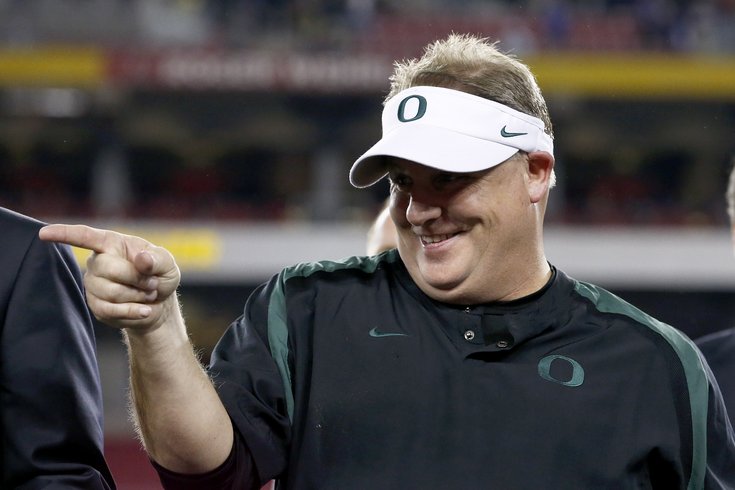 Chip coached in college once, but doesn't plan on returning if he can help it.

In today's fast-paced world of journalism, the speed with which you can re-blog other news-worthy reports from around the web is important. The faster you can publish your story, the more people that will read yours, as opposed to someone else's.

In the past, Chip Kelly has be connected to USC, Texas, Miami, and whatever college has had an opening at the head coaching position. There will be more. For example, there are reports that Les Miles could be fired by LSU. I suspect people won't even wait for that to happen to connect Kelly to that job.

Hell, Detroit reporters asked Kelly if he had interest in going back to college without even naming a specific college today:

And so, as a way to save some precious minutes, I'm going to pre-write a standard "Chip Kelly back to college report," in which I can just fill in the essential blanks. It'll be sort of a Chip Kelly "back to school" Mad Libs. Here goes:

Ever since Chip Kelly landed in Philadelphia, sportswriters have for some reason linked him with whatever latest major college football program suddenly had a new opening. The latest such opening is (fill in name of college), who fired embattled head coach (fill in coach's name), who (reason said coach sucked this season).

According to (name of over-ambitious reporter looking for some publicity), (above named college) is likely to pursue Kelly.

The (Eagles' record) Eagles will take on the (name of next opponent) on (date of the next game). To be determined if the Eagles can fix (latest reason the Eagles were horrible). For now, that seems to be Kelly's primary focus.